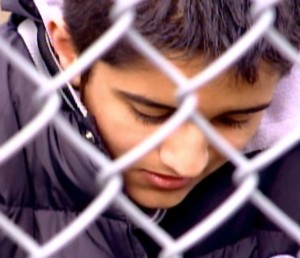 The forum was well attended with approximately 70 per cent of the attendees being Kwantlen students. Sangra said that the forum was interesting and that there were a variety of people on the panel.

“We discussed a lot of different issues from various viewpoints so it turned into a really interesting discussion.  There were a lot of really good questions that came out and I think everybody had something to say.  It was a very informative panel and it wasn’t really one-sided.  There was a diversity of opinions, but I think that’s really good because these things are never going to be simple,” said the producer-director.
I got to sit down with the president of Vivamantra Films Inc. and ask her about the film.

“I made Warrior Boyz because I wanted to find out why young people are caught up in gang culture.  It has been an issue that has been going on in the community for 15 years and it hasn’t been decreasing, if anything, it has been increasing.  It has ended up in the suburbs and made its way to kids from middle class families.  I wanted to know why it’s such an attractive option given that so many people have died as a result of it.  It’s an issue that has affected everyone,” said Sangra.  “I wanted to do a film that shows some of the challenges that young people are going through today that makes this gang lifestyle an option.”

Sangra tells me what she has learned about the gang problem in Metro Vancouver as a result of all her research.

“It’s a very unique situation.  It’s not like New York or Toronto because most of the people come from middle class backgrounds and there are very many multicultural gangs.  Gangs are everywhere, but if you look at it just in Vancouver, a lot of the kids are coming from middle class families; many of them are from the suburbs.  If you were to compare it [gang life] from Vancouver to LA, it is totally different.  There are so many gangs like the United Nations and Independent Soldiers who are very mixed.”
She explained why she chose to base the documentary in Surrey rather than the Lower Mainland as a whole.

“I chose to focus on a South Asian angle although it impacts all communities.  It is an area that is personal to me. I think that anyone from any culture can relate to the film.  It is so surprising to see this in Surrey.  The schools are nice, the neighborhoods are nice and kids live in these big houses in cul-de-sacs, yet some of them still idolize that gang culture.  I have to emphasize that most kids are doing fine, but there are always kids in the class who are struggling and could go either way.”

Warrior Boyz aired on Global Currents earlier this year and has premiered at international film festivals in Miami, Toronto, LA, New York, Edmonton and San Francisco.  The documentary was nominated for three Leos this year (best documentary, best directory and director of photography).