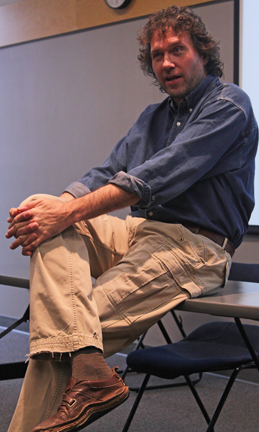 Chef Michael Smith of Food Network’s Chef at Home, graced Kwantlen with a candid lecture about food on Nov. 17. Abby Wiseman // The Runner

Michael Smith, the easygoing host of Food Network’s top rated show Chef at Home, paid Kwantlen a visit on Nov. 17 to talk about the thing he knows best: food.

Smith was candid about his theories on food and the state of North American food systems, showing that he has an activist side that transcends his Papa-Bear image on Chef at Home.

He opened by saying that he’s the type of guy that “tells it like it is” and that he’s here to “push a few buttons and piss some people off.” Smith was quick to address Sodexo’s image and was conscious that the catering company was not necessarily popular with all students.

“Not everyone is excited about what we do. We very often take the lumps,” said Smith.

He also said that he is happy to be a part of Sodexo and able to push the company to change for the better.

After the elephant was out of the room, Smith moved the subject matter to the critical issue of our food system, saying that food in North America is the cheapest in the world, but we get what we are paying for. Instead of eating food high in nutrients we have become a society that lives on unsatisfying processed foods that are full of ingredients that we can’t pronounce or understand the effect they have on our bodies. Making us have one of the “single worst food systems on the planet,”said Smith.

Smith also addressed the dire situation of our farms and farmers, saying that agricultural land is being depleted and many farmers don’t have succession plans, or know who will take over their farms when they retire, mainly because our food system is disrespectful to our farmers. Our cheap food comes at a cost to the farmers who grow the plants on which we depend.

As Smith’s speech wound down, he brought it all to the point that we have lost a personal connection with our food, whether it’s through the lack of interaction between farmers and consumers, or the decline of people who cook for themselves. Smith says that food is personal and it’s our willingness to invest time and money into the food we consume that will create a healthy society.

The Papa-Bear did come out in Smith at the end of his talk when he surveyed the crowd and firmly asked “everybody got it?”

The speech was followed up with a book signing, and Sodexo served up three of Smith’s dishes at the cafeteria.