The long-awaited vote on the controversial HST will begin June 13 (delayed by the Canada Post lockout). 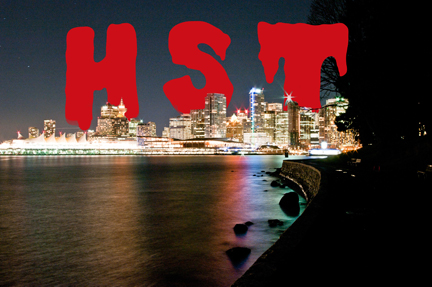 Whether you love it, hate it or just plain don’t understand it, the time has come to vote on the Harmonized Sales Tax.

“Are you in favour of extinguishing the HST (Harmonized Sales Tax) and retaining the PST (Provincial Sales Tax) in conjunction with the GST (Goods and Services Tax)? (Yes/No)”.

Voting “yes” will return B.C. to the former GST/PST system, while voting “no” will keep the current 12 per cent HST.

The HST took effect on July 1, 2010 but has proven to be an incredibly controversial topic since the last provincial election.

The Liberals, who introduced the tax under former premier Gordon Campbell, have argued that the new HST will be better for businesses and create jobs.

Tracy Pearson, owner of Specialty Engineering, an automotive shop in Delta, is in favour of the tax and will be voting no in the referendum

“The number one point is the reduction in paperwork and time, the second thing is the small amount of saving for business,” said Pearson. “If you’re going to buy something then there is incentive to buy because there is a reduction in cost because we get the 12 per cent back.”

While the HST has proven to save her business some money, she admits that the amount has been so small she has not been able to pass any savings on to customers.

Pearson said that despite being in favour of the tax it is making things harder on the individual consumer.

“Personally, as it sits at 12 per cent, it is costing us more and I think that might balance out in the long run but I don’t know. I’m much more in favour of it at 10 per cent because then it off sets the personal aspect of it,” she said.

The bicycle industry is one of many that has been directly affected by a rise in the HST. Bicycles were previously exempt from the seven per cent PST and were only subject to the five per cent GST.

Simon Quinn Sears, manager of O’Hagan’s Peninsula Cycles in South Surrey, doesn’t mind the tax but says it has changed things for customers.

“Now there is not always a deal to be made with the 12 per cent sales tax. It’s certainly harder to give people the feeling like they are well taken care of,” said Sears. “It made people more wary of shopping and they certainly had to factor that in to it.”

This past Christmas, Sears saw a drop in sales compared to previous years and has not seen much of a savings from the new simpler HST.

Sears hopes that the B.C. Liberals will follow through on plans to lower the HST on bicycles and safety gear.

The B.C. Liberal party has promised to lower the HST to 10 per cent by 2014 if voters elect to keep the tax.  They have also taken input from the public on lowering the HST on some goods and services previously exempt from the PST.

For students and young people it is hard to know how the HST will affect them. Here is a list of items or services that were previously only subject to the five per cent GST and are now subject to the 12 per cent HST:

These are items or services that have been lowered under the HST:
•    Residential heating and electricity (drops .4 per cent)
•    Alcoholic beverages (drops 3 per cent)
•    Children’s disposable diapers (drops 2 per cent)
•    Hotel rooms (drops 1 per cent)

You can find a further list released by the B.C. government here