The KSA council voted to raise the budget for their upcoming Cram Jam concert to nearly $82,000 from the $50,000 approved earlier, over objections that no concrete plans had been presented. 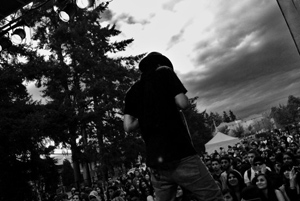 Student senate and board of governors representative Derek Robertson accused the Cram Jam planners of pillaging funds from other events and groups.

“We have no clue what the Cram Jam committee is planning,” said Robertson. “This body would be negligent to approve spending $32,000 without seeing any details of where it would go period.”

After prodding, members of the Cram Jam committee released a draft planning tool, but stressed that the plan would be “reworked to the bone” multiple times and that much, if not all, of the information would be completely changed.

The draft estimates the free concert will attract between 2000 and 2500 people and will feature a “high-lining Hip hop artist” and two opening acts.

The final amended motion took the money from eight other budget line items including $6,500 from clubs support and diversity, $7,500 from new student orientation, $3,800 from Canada Day events, and $6,000 from September Welcome Week.

The Surrey director, Sean Bassi, explained that unlike in previous years, Canada Day celebrations would no longer be planned for all campuses as the money was needed for Cram Jam.

Robertson expressed concern about the lack of notice to individual campuses.

“To give campus councils about two weeks notice to say: ‘Hey guess what? You’re on your own for Canada Day’ is ludicrous,” said Robertson.

KSA rules require planning and room bookings for events to be submitted at least four weeks in advance.

Bassi argued that there were no rules about which events the director of events is required to work on.

“I know that some people expect the director of events to do something on every campus, but that’s just a tradition,” said Bassi. “It’s not a policy or anything.”

Surrey director Sean Bassi also asked to be paid for working extra hours for Cram Jam above his regular 25 hours per week. Council voted to allow him to work up to 40 hours per week for the following six weeks. If he claims the maximum, Bassi will receive almost $1,000 in extra pay.