Dispensers are being installed and students are talking.

The new MultiPass will be available in all Kwantlen campus bookstores starting Aug. 25.

The $40 (per month) MultiPass will provide students with access to transit under the U-Pass, and a host of additional services that are exclusive to Kwantlen students. 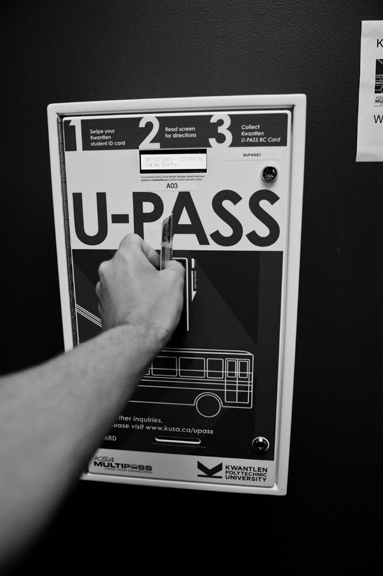 “We felt that because U-Pass programs are generally mandatory for all students that we should make an effort to try and see if we can provide additional services for students who may not see a benefit in riding transit,” said Ben Newsom, MultiPass program coordinator at the KSA.

The Kwantlen Student Association had been negotiating to bring the U-Pass to Kwantlen for several years. The official program was announced in June 2010 with the intent to have the program running by the end of the summer to meet the provincial government’s campaign promise of having a U-Pass by September 2010. Members of the student association didn’t feel that the contract presented by Translink met the diverse needs of students at Kwantlen and went back to the table for more negotiations. A referendum was held in February 2011 where students voted largely in favour of the MultiPass. By May 2011 the contract with Translink was finalized.

While students will have the unlimited transit access provided with the U-Pass, they will also have access to services such as an inter-campus shuttle, a car share program, a discounted membership at Gold’s Gym and discounts with SPUD, a local, organic grocery delivery company.

The 16-passenger, inter-campus shuttles will run every 35-40 minutes between Surrey, Cloverdale and Langley campuses, while students who prefer a faster ride can opt for the Car2go program that will allow students to take one of seven shared cars.

All students have to pay for the $40-per-month MultiPass when they pay their semester tuition fees, but the additional services and any associated costs, such as the $5 (per month) Gold’s Gym membership, are optional.

“All these things are optional and students do not have to spend any more than the regular cost of the MultiPass,” said Newsom.

While the procedure to sign up for these additional services has not yet been finalized, Newsom said it will likely happen through the MultiPass website.

Newsom also said there have been some problems with the Gold’s Gym and SPUD programs and the final details are still being worked out.

“Unfortunately the full implementation of what I wanted to have happen just doesn’t seem likely for September but it’s something that we’re working towards,” he said, regarding SPUD.

Students must pick up a new MultiPass from campus’ bookstores at the beginning of each month. Simply swipe your student ID card through the dispenser and you will receive the MultiPass. Students should remember to have their MultiPass and student ID on hand when using public transit.

“If transit police ask you for your proof of fare and you don’t show them your student ID and just show them the U-Pass, they will confiscate your U-Pass and will likely give you a fine,” said Newsom.

For more information and updates on the MultiPass, visit ksamultipass.ca