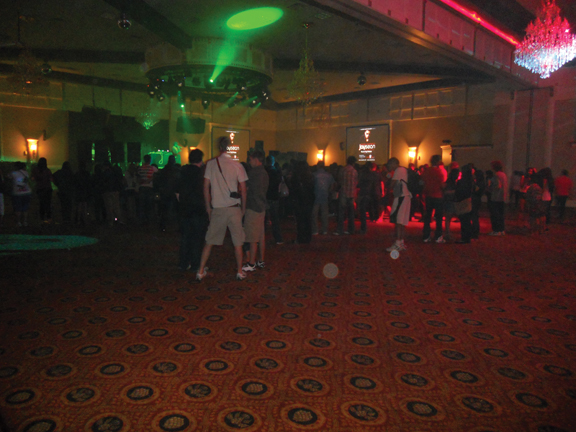 Cram Jam headliner Jay Sean took the stage at the Royal King Palace banquet hall Thursday night instead of in a Kwantlen Surrey campus parking lot as had originally been planned.

KPU sent a mass e-mail Wednesday Sept. 7 advising students, staff, parents and the community that the concert had not received “the approvals required from the City of Surrey that would have enabled the event to take place on the Surrey campus” and was “not a university sanctioned event.”

In an email sent to KSA staff and elected officials, director of events Tarun Takhar blamed the venue change on Kwantlen and accused the university of providing “misleading information” to the RCMP.

“We are displeased and disheartened by the actions of the University. It has caused unnecessary strain and damage to the KSA and our directors and staff; those who have had to work extra hard to ensure the success of CramJam [sic]. We will address this issue with KPU in due course,” wrote Takhar.

Takhar also claimed that the “RCMP, and in turn the City, were led to believe that the event was not advisable, primarily due to security risks associated with the possibility that a large number of South-Asians may attend.”

“We find these allegations discriminatory as past CramJam [sic] events have not been questioned in accordance with what ethnic group(s) attended or hosted the event,” wrote Takhar.

“A couple of days ago both the city of Surrey and the RCMP had contacted Jody [Gordon] to let her know that permits and liquor licenses were being rescinded,” said Saunders.

“The university did not seek out this information. It was brought to our attention by the RCMP and obviously the RCMP brought it to the city’s attention and the city made the decision to withdraw the event permit,” added Gordon.

According to Laurie Cavan, general manager of parks, recreation and culture for the City of Surrey, the original application from the KSA indicated that the concert would be of the same size as the year before with local entertainment.

She explained that permit applications state that any significant changes to events must be reported to city and that in this case it wasn’t done. She also dismissed the idea that racial profiling was a factor.

“About five days before the event it came to our attention that in fact it wasn’t a local entertainment that was booked,” said Cavan.

She said when Jay Sean performed at Fusion Festival in Surrey earlier in the summer more than 8,000 people attended.

“We knew that that individual would draw quite a significant crowd; far beyond what was the information originally provided to us in terms of the anticipated crowd.”