Kwantlen giving away a free car

As part of the Kwantlen Polytechnic University’s massive rebranding campaign, the school will be giving away a free car come March.

Students and community members have until March 1, 2012 to enter the Smarten Up at Kwantlen draw for a chance to win a 2011 smart fortwo coupe.

“We wanted to offer students something that they could really use and of course, get excited about,” said Nicole Lotz, manager of marketing and communications at Kwantlen in a press release. “It also coincides perfectly with our commitment to provide outstanding student experiences through our teaching, support programs, services and systems that enhance and enrich student life.” 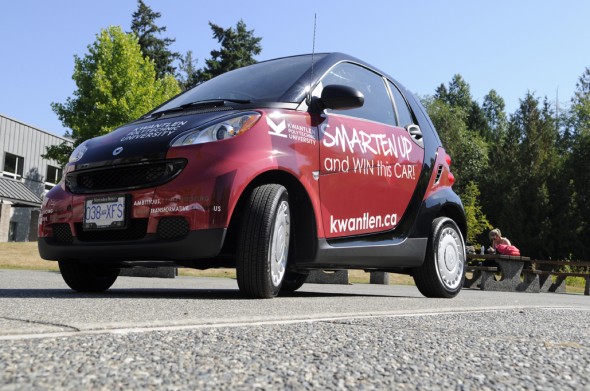 Kwantlen is giving away a 2011 smart fortwo coupe as part of their Smarten Up at Kwantlen draw. Matt Law / The Runner

The final draw will take place on March 16, where 10 finalists will have a chance start the car with a random key and drive off with their new ride.

Kwantlen recently released their new logo as part of the campaign to rebrand and raise more awareness . Giving away the car is another step in raising the university’s profile.

“We’ve been around for 30 years now but [there is] very, very poor brand awareness, and most people that know us, know us as Kwantlen College, unfortunately,” said Joanne Saunders, director of marketing and communications at Kwantlen.  “A lot of people don’t even know that we have four campuses.”

There will also be an early bird draw, held Sept. 23, for a 15 inch laptop and other electronic goodies.

For more information on the Smarten Up at Kwantlen draw, visit kwantlen.bc.ca/smartenup.html