Lliam Easterbrook – sonic archaeologist – brings you his latest finds from excursions into ancient record bins. Every week – only on Vinyl Dust-off. 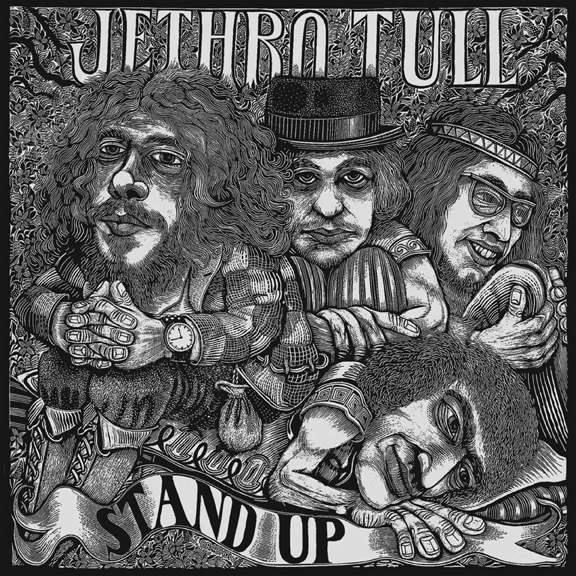 Every time I watch Anchorman and Ron Burgundy (Will Ferrell), the dimwitted crackpot misogynist gets called up on stage at the speakeasy to show the audience his jazz flute prowess, letting the brass flute coolly slide out from his sleeve as he relents, “I’m honestly not prepared. I’m really not prepared,” I think of Jethro Tull’s Ian Anderson. Burgundy even gives a nod to Anderson, exclaiming “Hey Aqualung!” just before the finale.

Anderson doesn’t shatter glass or blow fire, but; if you’ve seen the Rolling Stones’ film Rock and Roll Circus (and if you haven’t, it’s well worth checking out), Anderson wails on his flute, keeping one leg suspended in the air for almost the entire set as his body sways and contorts in mad ways to the groovy folk-funk rhythm section of Glenn Cornick and Clive Bunker. It’s ridiculous…ly awesome, to say the least.

On Jethro Tull’s second studio album, Stand Up, we see Anderson take the reigns of the band, writing and composing the entire album. The result is an album of varying musical influences; from folk to progressive, classical reprisals to traditional Celtic, psychedelia to hard rock, Stand Up is a flawless album.

At just under 40 minutes, Jethro Tull takes the listener through one pastoral landscape after another, seemingly separated by one amazing flute solo after another. Now, I’m not a fan of any kind of chirpy pan fluting music.

So, if you’re a raging Gheorghe Zamfir fan, not only is your musical taste questionable, you suck, and you probably won’t dig how bitchin’ Ian Anderson’s flute sounds next to a throbbing bass, rolling drums, and a wailing guitar. Just listen to album opener “A New Day Yesterday,” and you’ll see exactly what I mean.

The artwork for Stand Up won best album art in 1969  —  wait, do they even give awards for album art anymore? Oh… right; it’s rather cumbersome and vexing to grasp a visual aesthetic when you’re squinting at “art” the size of a fucking nickel on the screen of your iPod.

Ahem, sorry — anyway, the original gatefold vinyl release featured a woodcut pop-up book design, and when you opened up the album, a cut-out of the band popped up like a child’s pop-up book.

Even though the album reached number one on the British charts that year, and the artwork (by artist James Grashow) won best artwork, unfortunately the record company axed the woodcut design to save money on production.

My 1973 vinyl edition just has a rad picture of the band.

It’s no pop-up book — but hey, at least I’m not squinting like a perturbed rube at a glow-moaning pixilation of Zamfir’s excruciatingly sentimental pan flute on my lossy-compressed iPod, right?

Play it loud. Play it proud.

The Evil Bastard KARAOKE Experience, Mondays, Tuesdays, Wednesdays and Sundays (9 p.m.- 1 a.m.) >Kristi Alexandra
Take a stroll through the scariest part of town and you just might find yourself at Funky Winkerbeans. Occasionally hosted by Vancouver punk-vets Mr. Chi Pig and Wendy Thirteen, the dive bar is hosting karaoke four days per week. You’ll get so drunk for so cheap you won’t even notice you’re in the filthiest hole this side of the tracks.

City and Colour, Jan. 19 at the Queen Elizabeth Theatre >Kristi Alexandra
While teenage girls and sad, sappy suckers alike might have taken their break-up song loyalty to Bon Iver rather than our fellow Canuck and ex-Alexisonfire vocalist, Dallas Green, the man’s a talented songwriter. Aside from loving him musically and emotionally, as a Canadian, we really have to appreciate his spelling of “colour.” Right? Hear Dallas tell your emotionally shipwrecked life-story live on Jan. 19 at the Queen Elizabeth Theatre.