I try to live my life as if a Jackson Pollock painting were a handful of William Blake aphorisms thrown madly against a wall, where the paint screams like a wild flying adage, and the cold canvas stops it dead. 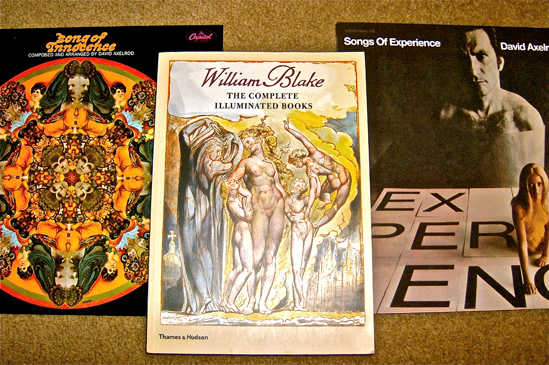 Blake’s aphorisms — “Prudence is a rich, ugly, old maid courted by incapacity,” “Better murder an infant in its cradle than nurse an unacted desire,” “Imagination is the real and eternal world of which this vegetable universe is but a faint shadow,” and my personal favourite, “If the doors of perception were cleansed every thing would appear to man as it is, infinite. For man has closed himself up, till he sees all things thru’ narrow chinks in his cavern” — are the terse yet sublime words of a radical, revolutionary, an abolitionist when slavery was still relatively unquestioned, an arbiter of free love in an intensely conservative time. Idiosyncratic, William Blake was mystical poet and artist of the Romantic period; some say the first Modernist.

Vehemently against authority and institution of all kinds but intensely spiritual, Blake went largely unrecognized in his lifetime, dying poor, reportedly spending his last coins on a pencil so he could sketch. He was a lasting influence on Beat writers Jack Kerouac, Allan Ginsberg and co., Jim Morrison of the Doors, Tom Waits, and Johnny Depp (Depp played Blake in the Jim Jarmusch film Dead Man).

While his poetry is canonical, his art remains relatively outside the establishment, yet many still regard him to be one of the greatest artists Britain has ever produced. The poet William Wordsworth remarked of Blake: “There was no doubt that this poor man was mad, but there is something in the madness that interests me more than the sanity of Lord Byron and Walter Scott.”

Songs of Innocence and Songs of Experience — two of Blake’s early companion collections — examine many of Milton’s existential-mythic states — paradise and the Fall — as well as Blake’s deeply libertarian beliefs. SOI showcases the freedom and ingenuousness of childhood, but maintains that children can be exploited. SOE expresses a profound repugnance for institution and repudiates succumbing to inhibition. To Blake, inhibition withers the soul while freedom and imagination comprise humanity’s true spirit. The juxtaposition of unhinged but naïve innocence with the fettered knowledge of experience leads Blake to conclude that a blending of the two is paramount for humanity to flourish as empathetic and creative beings.

Knowing my affinity for Blake — my obsession, as it were — and my concurrence with even his most radical beliefs (and probably experiencing my enactment of these to a comparable extent — for good or ill) my pal Brando introduced me to a hidden gem while we were in a Victoria record store a few weeks ago: a set of instrumental records from the late 60’s based on Blake’s Innocence and Experience.

Sampled by artists such as Dr. Dre, Unkle, Wu-Tang Clan, Sublime, and Cypress Hill, composer David Axelrod arranged lush and vibrant soundscapes on SOI and SOE, naming most tracks after Blake poems from each compendium. Blending jazz, psychedelia, rock, classical, theatre and funk music, the two albums lead the listener through a myriad of emotive climes through rich compositions evoking the Blakean spirit of contemplative melancholy, dream, and awe.
Check out the majestic godliness of “Urizen,” the eerie heights and cathartic chasms of “The Fly,” the delicate fury of “The Human Abstract,” the groovy creeping of “A Divine Image,” and the pastoral tranquility of “A Dream.”

Here, more than other albums, the analog sound really lets the music breathe. I’ll concede and say that these albums changed my life. I still feel like the paint, but now there’s no flytrap canvas to stop me.

If you’re in any way looking for alternative music to facilitate creativity or meditation, or if you’re just looking for some tasty jams to dig, I highly recommend getting your hands on these two gems from the late ‘60s. Couple that, if you dare, with your choicest perception-cleansing substance and a copy of Blake’s poetry, and you’ll be well on your way to … well …

Play It Loud. Play It Proud.