The price will never be right for the Northern Gateway pipeline

By Brontë Renwick-Shields —The Martlet (University of Victoria)

VICTORIA (CUP) — Imagine trying to navigate a boat as long as the Eiffel Tower is tall through B.C.’s northern coastline, avoiding rocks, marine life and, most importantly, the shore. Sounds hard, right? Now imagine that boat is carrying two million barrels of crude oil onboard.

(Click here for the original story from The Martlet)

Enbridge would like to see 225 tankers per year take that dangerous journey. The company’s proposed $6-billion Northern Gateway Pipelines Project would run 1177 kilometres of pipe from Alberta to Kitimat, B.C., where 450 million barrels of crude oil would be loaded into tankers set for Asia. 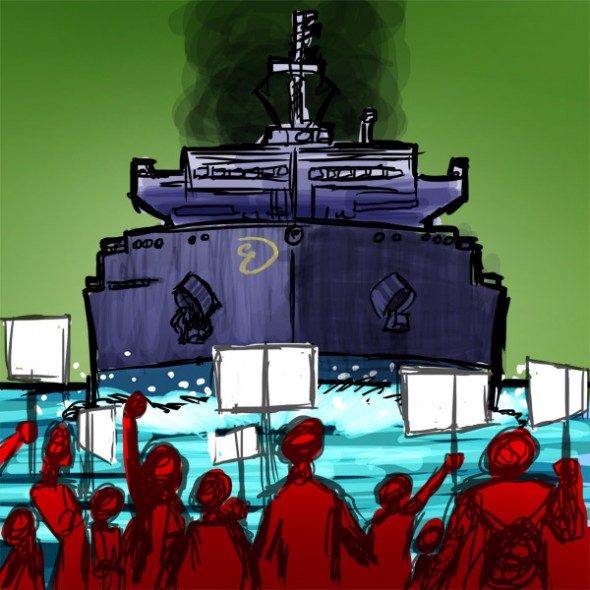 The Enbridge pipeline would require tankers to navigate through Hecate Strait, which Environment Canada has labeled “the fourth most dangerous body of water in the world.”

The project has met strong resistance from First Nations communities, environmental groups and many B.C. residents. Critics claim this project would put B.C.’s rainforests, rivers, lakes and oceans at risk, and could have detrimental effects on the health and livelihood of all who live here.

The project could also hurt the province financially. If a tanker were to leak or a pipeline to burst, B.C.’s fishing and tourism industries would be devastated as the Pacific coastline and rivers that are home to salmon, such as the Skeena and Fraser, would be contaminated.

On July 27, B.C. Premier Christy Clark issued her statement on the project. She presented a five-point proposal that requires Enbridge to provide B.C. with world-class spill protection, prevention and response systems and successfully complete an environmental review. The company also needs to comply with legal requirements and treaty rights for First Nations groups and give B.C. economic benefits that reflect the risks the province will bear.

Even if all these measures are followed, however, there will still be negative repercussions to consider. With B.C. taking almost all of the risk, is it even possible to receive enough “economic benefits” to compensate for it?

Anderson recently produced a message on behalf of the Dogwood Initiative that was deployed to Premier Clark’s riding. During the automated phone call, Anderson said, “Clark needs to firmly say no to these risky projects.” He urged members of the riding to say the same.

The call included a poll on whether or not residents agreed with the pipeline plans. Eighty-one per cent stated they did not agree with the plans. Of those who disagreed with the plan, more than 90 per cent wouldn’t be swayed even by more money from Alberta or the implementation of world-class safety systems.

The question stands whether or not this is in the best interest of B.C.’s future. Should we not be making efforts to turn away from fossil fuels and look for cleaner, more sustainable methods of energy? Most importantly, what happens when the oil runs out?

Premier Clark needs to listen to the residents of B.C. and understand that “no” means “no.”