Falcons clip Eagles in battle of the birds

Overmatched at the worst possible time of the season, Kwantlen couldn’t keep up with the nationally-ranked Langara Falcons, losing 100-75 Friday night at home.

However the most impressive line of the night comes from point guard Brody Greig, who tallied the strangest near-quadruple double I’ve ever seen, going for 13 assists, nine steals, eight rebounds and seven points. 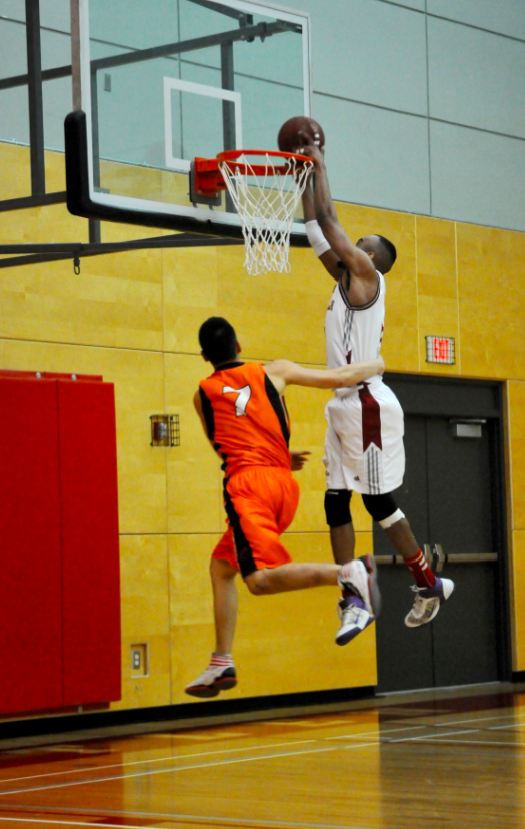 Kwantlen’s man in the middle, Ali Bosir, racked up 16 points and 16 rebounds, while forward Tristan Gruenthaler finally showed what he’s capable of offensively, scoring 19 points and ripping down 13 boards – unfortunately those numbers came at a price of seven turnovers from the 6-foot-6 Yale Secondary grad.

Usually on a night where Kwantlen sticks around early in the game, like they did in the first quarter of last night’s match – trailing only 21-20 at the first break – I would cite their late-game inconsistency as the roots of their perils.

I’m not suggesting that last night’s game against Langara should have resulted in a Kwantlen win. Let’s face it, the Falcons are ranked number-two in the country and field a roster that will rip your heart out in so many different ways.

And to suggest that the Eagles just had a bad shooting night doesn’t tell the story either. Langara hustles, boasts players with great length, and wears their opponents down because of how quick and how often they run their fast break.

“They [Kwantlen] can score, but their defense is just so inconsistent,” said Eberhardt. “Look at last weekend, they gave up 38 points in the fourth quarter. So that’s probably what coach Wilson is frustrated about, that they’re so inconsistent defensively.”

A veteran of the PacWest, Ebe knows what it takes to reach the upper echelon of the league – and has a good idea of what shortcomings are detrimental to a season.

“They have a tough time because they have no depth – the exact opposite of us – but their starting five are solid. I’m actually surprised that they’ve dropped a few of the games that they have,” he said. “You know your margin for error is so little when you lose one guy to foul trouble, or when your guys get tired. It hurts them when they don’t have the depth to stay in it late in the game.”

I know I’ve written before about how each weekend is more important than the last, and as each loss dominoes to another, that the Eagle’s playoff window narrows – but tonight’s game against the Douglas College Royals is the tipping point.

If Kwantlen loses tonight, the best record they can finish with is 7-14. If Capilano (7-11) and Camosun (7-11) each lose their last three games, both hold a tie-breaker over Kwantlen because of wins earlier in the season.

However if Kwantlen wins tonight, they can potentially go 8-13, and still pray for either Cap or Camosun to rattle off three straight losses, or for Douglas to drop their last two games. That would bring both Kwantlen and Douglas to 8-13 records, with a win tonight yielding a tie-breaker in favour of the Eagles.

Given the circumstances, the pre-existing rivalry between the two schools, and that I’ve heard that both Douglas’ baseball team and Kwantlen’s soccer team will be in attendance for cheering/heckling/gongshow-debauchery purposes – tonight’s game is definitely one to watch.

The game tips off at 8 p.m. at Kwantlen’s Surrey campus.