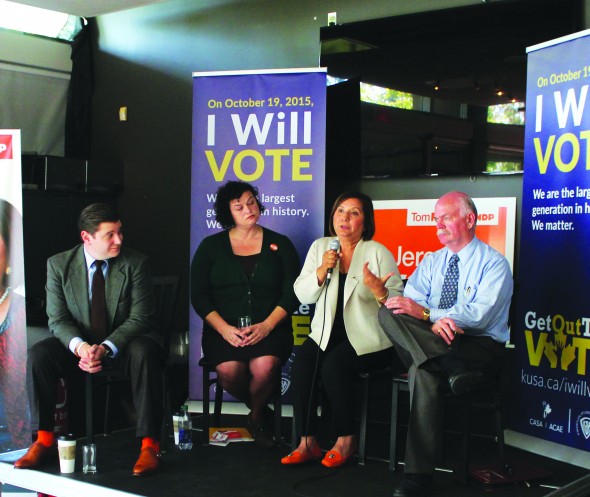 The meet-and-greet at the Grassroots on Sept. 29 featured a revolving door of NDP candidates coming in and out for meetings, but KPU students still got to hear and ask about the NDP platform.

The event was the second of the candidate meet-and-greet series organized by the KSA, with the Liberals in just the week before.

Incumbent Jasbir Sandhu of Surrey Centre/Surrey North, Rebecca Smith for Cloverdale-Langley City and Jeremy Leveque for Delta started the event. All three candidates are Kwantlen alumni, back in the college days of the university. Sandhu talked about the leaky portable he studied in at the time, wherein he was still able to gain some critical thinking skills.

“I had a job at a custom broker’s place when I graduated from Simon Fraser, I worked at the justice institute and I’m a politician now,” says Sandhu. “But the base in there, the education base that was built through universities, the college here—that base allows me to filter information, see what’s important.”

Smith didn’t talk much during question period, but she made clear her reasons for why she was running with the NDP. For one, she talked about the NDP’s belief in child care, how it should be affordable so that parents are, “Not paying a second mortgage to have your kid in a place so that you can go make a living that barely pays for them to be taken care of while you’re doing it.”

Before Surrey-Newton MP Jinny Sims and Gary Begg for Fleetwood-Port Kells came along later in the event, Leveque fielded the majority of the questions during question period. He started at Kwantlen in criminology, later studying philosophy and economics. Now he’s a PhD candidate.

Aboriginal students’ representative Justin Bige asked him about the NDP’s stance on Aboriginal issues. Leveque says there would be an inquiry into the cases of the missing and murdered indigenous women of Canada. He adds that they would adopt a “nation-to-nation approach,” and ask the Truth and Reconciliation Commission (TRC) and Assembly of First Nations (AFN) for recommendations on Aboriginal priorities.

The NDP criticizes Stephen Harper and the Conservatives for not having a serious commitment to climate change, yet the NDP is still open to building pipelines. Leveque says that a “credible, rigorous, science-based” environmental review process would be created first, and that if a pipeline project was presented to that process and failed, “It doesn’t pass. That’s how it works.”

“We’re against Northern Gateway, full stop. We’re also against Keystone,” says Leveque. “The only project that we are in favour of in terms of pipelines is the west to east energy pipeline.”

Later on, Gary Begg entered the Grassroots and made his introduction during question period. The former RCMP inspector spoke to marijuana enforcement, saying that the law hasn’t been enforced by officers for many years.

“Reality is that the possession of small amounts of marijuana have been basically legal for a long, long time,” says Begg. “As a policeman, I can’t remember the last time I charged a person with possession for a small amount. In reality, the law that exists has not been enforced by the RCMP for probably 20 years.” He also spoke about mental health care, which he argues is virtually non-funded and should be more aligned with corporeal health care.

There are criticisms of the NDP moving towards more centrist policies, potentially alienating older NDP voters and even Palestinian voters because of the party’s stance on Israel.

Leveque, who joined the party at 16, still believes the NDP is the same in principles despite saying that criticisms are “fair.”

Then, despite the reports of NDP candidates being forced to resign because of anti-Israeli statements (Google former candidates Morgan Wheeldon or Jerry Natanine), MP Jinny Sims says she still feels like she’s entitled to her full opinion in her NDP caucus.