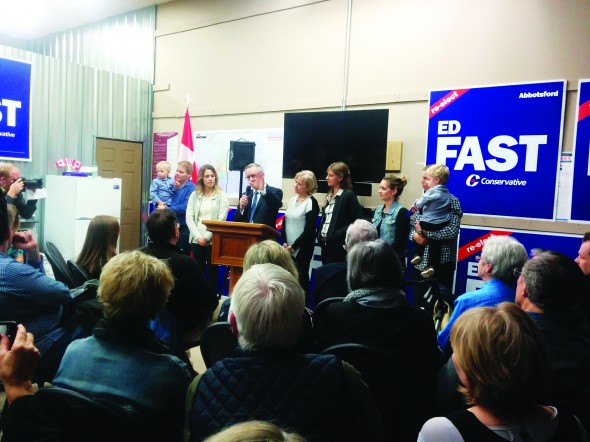 No one cried over the numbers at the election night party in Conservative Ed Fast’s campaign office. They at least had one win to smile at.

But there were tears in the true blue hearts of Tory supporters across the nation, as the Red Wave washed over Canada on Oct. 19. So ends the decade, the timeline, the era of Stephen Harper’s Conservative government, in whose cabinet Fast was the trade minister.

Fast has been MP in Abbotsford, a historically Conservative riding, since 2006. The makeup of Conservative votes this time around was about 46 per cent, much fewer than last election. Fast’s office is behind the Mr. Lube on South Fraser Way—Abbotsfordians typically honk their horns on the SFW when the Canucks win playoff games—and the street of his campaign office was lined with endless vehicles.

The office was converted from a garage and extended with a large tent, beneath which were numerous Conservative supporters, some young, most white-haired. All eyes were poised on the TV, hands occasionally shooting up in glee, cheering even, when a riding somewhere in Canada went blue.

But that enthusiasm could only carry them so far, and the campaign manager eventually turned the TV off as Global News called it for the worst.

Fast is in the crowd when I shake his hand and ask him for a little interview, but he’s says he’s about to do his speech. We agree to chat afterwards.

“Tonight, Canadians have decided that they would like to write a new story,” says Fast, near the end of his speech. “And that’s the way of democracy. Now it is a much riskier story I believe, but Canadians have spoken … I’ll do my very best to write that story in a manner that holds the new government to account, brings honour to our own community here in Abbotsford, and delivers prosperity and security for our nation.”

“God bless you all,” says Fast. “And may God continue to bless Canada.”

“Amen!” shouts a man in the back, and so begins the standing ovation.

I catch Fast at the podium and we walk through the crowd into his office, where a diaperless two-year-old is bouncing around waiting to be changed by his mother. They quickly bustle out.

“Abbotsford is a city that was severely neglected the last time the Liberals were in power,” says Fast. “I can assure Abbotsford residents that they will have a very vocal and assertive representa—” The baby somehow opens the door. Fast shuffles him out.

“A representative that advocates for their needs,” he finishes.

Despite the historic displacement of votes in Abbotsford this election, Fast says he’s confident that he can deliver for them like he says he has in the last 10 years. But he and other supporters know it will be difficult.

“It’ll be hard because the Liberals are a majority,” says Marilyn Schroeder, a Conservative supporter beside the snack table. “They will make their things fly, and it will be a little bit harder for Ed or any of the Conservatives to sort of caution or give advice. They just won’t have the same clout I guess.”

“Some of the money that was going to Africa for women to take care of their children, they’re now wanting to allocate that money for abortions rather, for African women,” purports Schroeder. “That’s not something this party is working towards.”

“Oh, here’s the numbers—15000 to 10000,” he observes. “It is closer than last time.” Kobus speculates that this dip in numbers for his candidate could be a one-election phenomenon.

But, he notes, it could also be a change of tide in this historically Conservative bastion called Abbotsford.