Which way will the vote swing?

Surrey, Richmond, and Langley have all voted, historically, in a mostly Tory-blue hue that’s visible from outer space. No really, Google Maps-it.

But that’s not saying there aren’t some splashes of orange and red. The KPU Surrey campus, for example, happens to be in a riding which was a paragon of non-Conservative votes in the 2011 federal election. Then, while some 2011 Liberal votes successfully shot-it-up around our charming bit of Newton, the NDP’s orange crush bubbled down even to the mouth of Tory-voting Delta and the Fraser River.

It’s orange, that bit of the Fraser that wraps beneath the belly of the Pattullo. Will it stay that way? 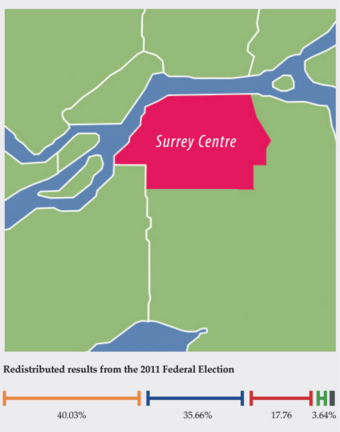 The Pattullo bridge is the tip of the Surrey Centre riding and goes as far south as Nordell avenue. The population in this riding is 111,468, the last time Statistics Canada checked. This is a riding that had NDP and Conservative MPs de-seating each other every consecutive election after 2005, and we could probably count on the vote going either way this year partly because of that transient margin. In 2011, the NDP got 40 per cent of the vote compared to the 36 per cent that the Conservatives won. Jasbir Sandhu currently has the seat.

The workforce in this riding mostly consists of tradespeople, transporters, and equipment operators, and the families have on average 3.5 children to take care of. The NDP being at its roots a labour party might contribute to the votes they’ve accumulated in this riding way back when. 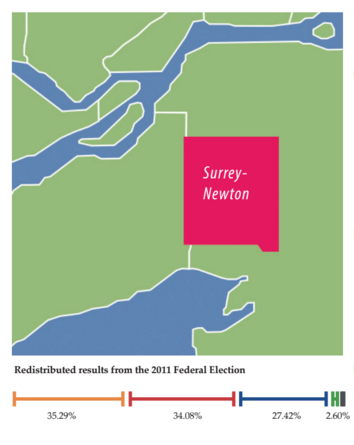 It’s in this riding that the Liberal party would most likely paint-it-red if they can win it from the NDP. Here it’s a chess game between those two parties. The difference between their votes last election was merely 393 votes—an upset, for sure, and I’d suggest something similar will happen after everyone casts their ballots.

NDP MP Jinny Sims has the seat for now.

Oh, if you’ve been keeping up with the news, or simply have been kept up by the sound of gunshots, it’s obvious that public safety is a big issue in this riding and a lot of Surrey. All the candidates in the area can’t disagree with that. 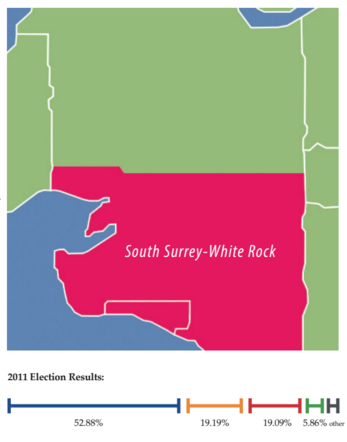 Likewise, candidates in South Surrey-White Rock are actually feeling quite united on the issues, according to the Peace Arch News’s riding debate coverage earlier in September.

Well, at least the non-Tory candidates felt united—no Conservative candidate showed up to that debate.

Because why waste your breath when you won the riding with 53 per cent of the vote last time? And the last time? And if all the candidates, as reported by the Peace Arch News, were happy to take shots at you?

Tory MP Russ Hiebert has been the incumbent since 2004 and it will probably go that way this year. The average family income in this riding is $101,790 according to StatsCan, and the propensity to vote for a party with tax policies that reward that income will surely will be higher.

This riding also includes some votes from Fleetwood-Port Kells, which is also a historically Conservative-voting bastion. And it’s a large riding. 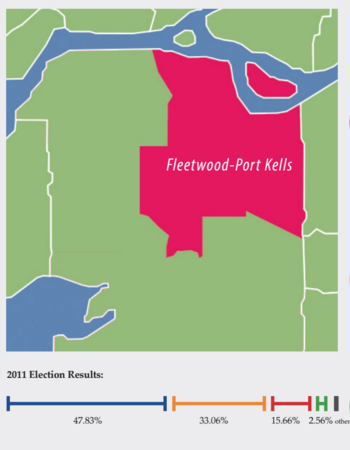 Again, Fleetwood-Port Kells is a large riding which spans a little more than the Surrey Centre and Newton ridings combined. According to Global News’s riding maps, the divisions within the riding are enormous and Conservative. It would take a lot of effort for the NDP or Liberals to win over enough people in one of those larger divisions.

Then consider that the highly successful Conservative MP Nina Grewal has been sitting in this riding since 2004. It will be difficult to dethrone her.

According to a report by the Redistribution of Federal Electoral Districts, this riding’s boundaries were slightly redrawn, too, with no great disadvantages given to Grewal. It actually gains areas of Surrey North and South Surrey-White Rock-Cloverdale, the latter being a large Conservative base.

NDP and Liberal efforts have encroached on this area, and the NDP were the most successful in the last election with 5000 votes short of the Conservatives. You know, they actually could beat the Tories, but I suggest it would require basically all the votes in the riding taken away from the Liberals.

Meanwhile, in Delta proper, the Conservatives won 48 per cent of the vote in 2011 and placed Kerry-Lynne D. Findlay as the riding’s MP. This riding is probably eight times bigger than Fleetwood—Port Kells, but the population density is mainly focused in three areas: the area around Delta secondary, the Canadian side of Point Roberts and the boundary between East Delta and Newton, where most NDP votes in Delta are shored. Everything else is, uh, farmland. The NDP won 28 per cent of the vote here last time, and can probably take the riding marginally should they win more of East Delta and a substantial portion of even one of the other two suburban sprawls.

Findlay was elected only in the last election, so she’s up for review against a formidable NDP candidate named Jeremy Leveque, who taught university economics, studied political science, and is now a PhD candidate. This is a riding to watch. 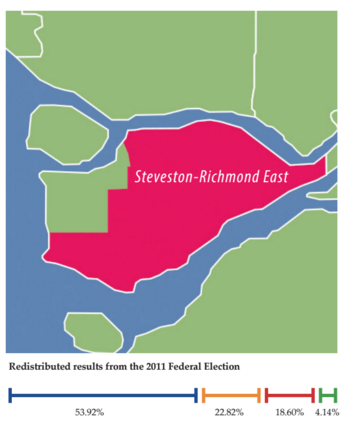 These ridings will probably vote Conservative even considering the newer Steveston-Richmond East riding. The issues in Richmond Centre, for one, include those affecting seniors. According to StatsCan over 60 per cent of the population are first generation Canadians, and people of this generation will most likely vote Conservative. Here the party received 58 per cent of the votes in 2011. 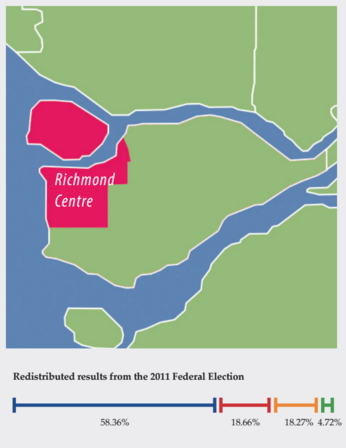 Richmond in general is fairly wealthy, with an average family income of $84,477, so it’s no surprise that the population probably likes to keep their taxes low. Also of note is that the incumbent Conservatives are running two Asian candidates, the Liberals and Greens running one each, and the NDP are running none. This is likely to increase their electability among the high immigrant population in the riding. According to Statistics Canada, around 40 per cent of Richmondites can speak Chinese, whether it be Mandarin or Cantonese, as a first language. 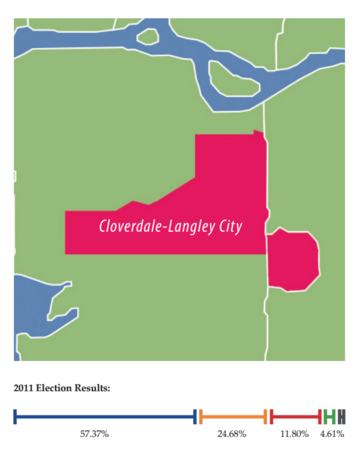 This riding and the adjacent Langley-Aldergrove riding and essentially all the ridings until the Okanagan are overwhelmingly Conservative. Conservative MP Mark Warawa of this riding has successfully held onto his seat since 2004. It includes some of Fleetwood-Port Kells and that only bolsters Warawa’s advantages. He would have to literally urinate in thousands of teacups to piss this election away.