Discussants engage in conversational exercise on existentialism, morality and the afterlife 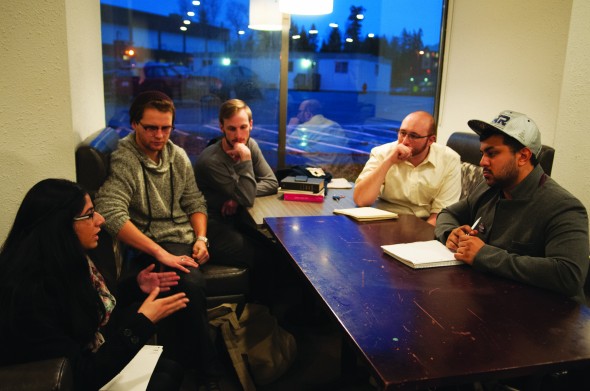 If you found yourself on the third floor of Trinity Western University’s Fraser Hall on Dec. 1, you would’ve seen a group of people occupying cream-coloured couches and vinyl sofas arranged into comfortable circles, all asking themselves why they were there.

Not why they were there in that common room, per se, but more why they’re here—why we’re all here—on this Earth, man.

Representatives from the Kwantlen Secular Student Alliance met with Trinity Western students from the Philosophy 390 class to participate in a “conversational exercise.” Their goals—to discuss existentialism, morality and the afterlife. The “exercise” aspect meant that, rather than trying to “win” the debate, both sides were more interested in creating meaningful, integral, open-minded discussion, building common ground and refraining from dominating conversations.

TWU masters student Jesse Rintoul is the Phil 390 class’s “existentialism leader,” and it is partly his responsibility to create events like this at TWU. KPU student Aaron Philip and KSSA president Parabjot Singh helped create the concept for the event with Rintoul, and Rintoul says the event served as something “above and beyond where a regular class would get you.”

Representatives of the KSSA also brought Dr. Martin “Marty” Shoemaker, a humanist chaplain from the KPU Richmond campus multi-faith centre. Shoemaker is a former clinical psychologist and was a Christian for 25 years before his “de-conversion.” Since leaving the religion, he has had a professional interest in expanding the secular worldview of the humanist movement as an alternative to religion, according to his bio on the SFU website.

Speaking of humanists, the KSSA is actually indexed on the B.C. Humanist Association website, which defines humanism simply as the idea that one can be “good without god.” Shoemaker explains that the term was in part derived from the genesis of the school of humanities, back in the days of the Ancient Greeks.

No Greeks, however, sat on the third floor common area in the grand circle of couches. The majority were students from the humanities. After some introductions, co-organizer Philip explained the topics that everyone would discuss that day.

“What constitutes a meaningful life?” he asks. “What is your source of morality? Is there an afterlife? How would you know?”

From there, the assembly rearranged all the available seating into cozy circles for smaller group discussions.

This continued for over an hour and, every so often, Rintoul nodded to Philip to prompt a rotation of the groups, changing the dynamics.

“People’s personalities come out in these kinds of activities,” says Shoemaker, “And their style of learning and whether or not they are competitive with ideas.” Though he maintains it was a good exercise that challenged him, he recalls a student in one of the small groups that he found to be more confrontational.

“I think most people are not as intelligent as they are,” he says, “And so they are operating from a premise that ‘I have to tell you how wrong you are.’”

After the exercise ended, Philip probed the other members of the KSSA about their takeaways. For one, the students found that their fellow discussants were honest about their answers and refrained from deflecting questions. No one felt like they were being attacked, either. Some of the KSSA members expressed their pleasant surprise at the open-mindedness of their TWU counterparts.

“That’s how we learn too, right?” says Singh. “It’s about being curious and wanting to understand the other person. It’s not about, ‘I’m right, and that’s it.’”

Likewise, Rintoul found that everyone was fair to each other, and accommodating to each other’s perspectives. He also learned about Kwantlen life, and “what fundamentalism looks like” outside of his own institution.

“I really like the idea of killing the us-and-them mentality in a Christian sphere,” says Rintoul. “I think we had a lot in common with the people we were talking to, and more similarities than differences.”