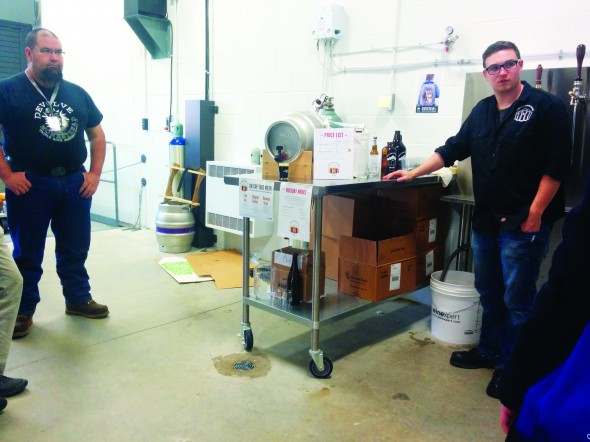 Brewmaster Tim Brown tries to play it down, but it’s clear that the first-years’ pale ale is kind of his favourite right now.

Of course, it was but one of four student beers on tap. The brewing program at Kwantlen Polytechnic University has started selling craft beer on Fridays from 1 p.m. to 5 p.m. at the KPU Langley brewing facility, at only $10 per growler.

“I think we started around October for growler sales and we’ve been selling every week,” says Brown. “This is coming towards the tail end of our brewing semester, so next week’s beers that are going on will be the last until January.”

An oatmeal stout was also available for sampling on Nov. 27, which tasted similar to a chocolate porter, and a Belgian Dubbel. But who knows what will be available next time—the varieties change on a weekly basis. They’ve poured golden lagers, India session ales and dark ales in the past.

All sorts of Kwantlenites came by to fill up their cups, even some KSA council members and staff visited after their meetings. In front of the facility at about 2 p.m. were three jolly bio instructors, chuckling and brandishing newly filled growlers.

“Ten bucks,” says Brennen Coristine, a biology lab instructor. “Ten bucks for a growler. That’s like, what…” He eyes his growler. “How many do you think, that’s two litres?”

Later in the next week, a first-year class was just finishing up in the brewing facility. Students were putting away their equipment, for they had just finished brewing a pale ale, the one that Brown implied was a crowd favourite.

His mind fresh from a class quiz and the end of a brewing day, Perris explains the process. There are really five simple ingredients to making beer—malt, barley, water, hops and yeast. Perris says that with those ingredients, you can make, “almost a limitless range of beers, in different styles, colours, flavours—anything.”

“So the pale ale,” says Perris, “It’s just one type of malt—the pale malt variety—and two different types of hops and water. And basically you mix the grains…” He points to the rows of smaller metal kettles nearby, all of them like oversized chrome Crock-Pots.

“We have three kettles,” he continues. “Basically, in one of them, the grains and water go in. It’s almost like an oatmeal. You kind of stir it around until you get out the sugars and the colour, minerals and things, and from there on it’s just about boiling it, cooling it.”

According to Perris, that’s about a three-hour process, but “more like five or six when you add in all the cleaning,” he laughs.

Brown says there’s a steady clientele for beer because of all the faculty and students, and that it’s ultimately a lot of fun. He’s been in the business for 17 years—he’s the owner of Surlie Brewing—but despite his brewmaster status, he says that you can’t really win at beer.

“You can be really good, but you can never beat it,” says Brown. “You can’t master beer.”