The search for space continues 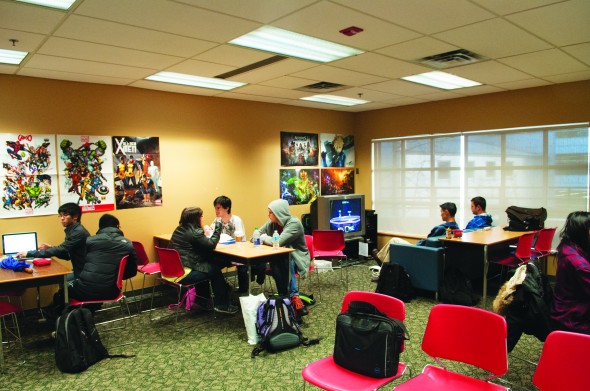 In the meantime, KGG members, whose club often books the social justice space (Birch 208) on Tuesdays from 12 p.m. to 6 p.m., have been instructed to move their gaming paraphernalia and activities to the smaller, adjacent room, Birch 206.

The university wants to let other clubs access the room, although a booking list is available for those who would like to reserve a time slot.

“I’m not happy about it,” says Nawid, a KGG member. “We were doing so well off with this room we had—although, we need more room, in terms of how the club is growing.”

“We were told this room was going to be closed, and then we would get moved over,” he adds. “But when we came back to school, nothing’s changed. It’s just all our stuff has been moved to the next room.”

KGG executive Tanvir Singh says he’s “very disappointed” in KPU’s stance on this issue. He says that, as far as the KGG knows, other groups on campus have been complaining about the constant plethora of people in the social justice space.

Still, he believes there is equity when it comes to booking that space, and that the conflict merely arises between the dual-agenda of the space.

“The way we have it right now—with a club space and social justice space—is just not working for either agenda,” he says.

It is true that the social justice space also was designed to function as a club room. KPU student services defines it as such. But the university said in their email informing the KGG of the new booking situation that Birch 206 was “designated specifically for the KGG.” And now their weekly meetings and their upcoming anniversary party must be in Birch 206.

Renovation plans for Surrey campus could include knocking down the walls between the second floor Birch building rooms, replacing the area with a cafeteria, and turning the old cafeteria into a potentially larger student space.

At least that’s what people are saying. These are among the most recent suggestions to remedy the historic scarcity of student space at Kwantlen Polytechnic University, for it will be a few years before the student association erects the student union building.

The Birch space committee’s ideas currently include a women’s centre, meeting rooms for students and clubs, offices for the Kwantlen Public Interest Research Group and the KSA’s records coordinator, among other things.

Singh is pushing for a club space, and says that anyone advocating for student life should be pushing for the largest space possible.