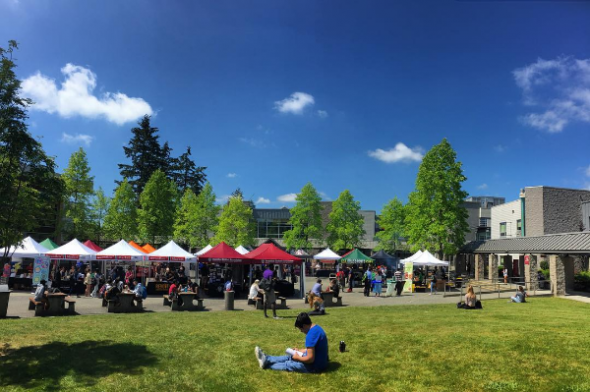 The Kwantlen Student Association’s summer welcome week on Surrey campus was over-budget by about $1,050 this year.

The budget was originally $5,000, but they shot through it because of professional DJ costs.

“We budgeted $8,000 last year, and that’s what I asked for again this year,” said KSA General Manager Jeremy McElroy, during a KSA executive committee meeting on April 21.

“But then something happened,” said McElroy, “and then finance committee axed all those budgets before it got approved.” The KSA’s finance committee meeting minutes discussing summer welcome week have not yet been released to confirm this.

Last summer welcome week, they spent 71 per cent of the $8,000 allocation, or $5,671, according to their unaudited financial statements.

McElroy said that $5,000 would not cover the actual costs. “Especially on the entertainment,” he said. “I was not consulted on these fees.”

“I have a hard time believing that,” said KSA president and vice-president external Alex McGowan.

To cover the costs, the KSA executives decided to draw $1,050 from Surrey, Richmond and Langley campus event funds, or $350 from each respective fund.

“I think having music and just a little bit of liveliness to the outside barbeque summer field is something that a lot of students would receive well, so that’s kind of my justification for that,” said McElroy. “I know it is 1,000 bucks, but in the grand scheme of things, knowing that we do have a decent amount of money to pull from each campus for the event field, I thought that $350 from each wasn’t too much to ask.”