Bible Studies Club will receive their $1,000 prize after all

“Let there be cash,” said KSA Council, and there was cash 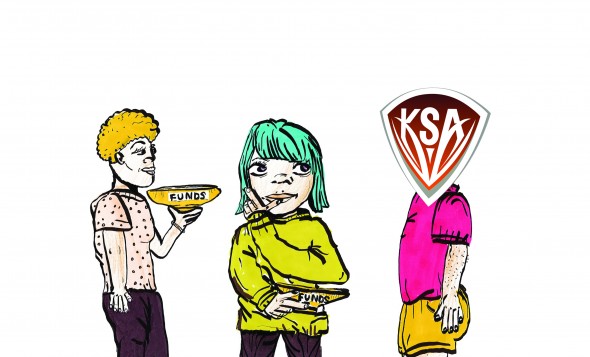 The Bible Studies @ Kwantlen group won $1,000 in a raffle at the Kwantlen Student Association’s annual general meeting in March—which they wanted to put towards a Christian students’ conference.

But because of a KSA regulation that implicates the religion-based nature of the conference, student councillors debated the appropriateness of granting the prize.

The KSA regulations state that grant applications related to social, political, and religious opinions or causes—except those which are consistent with and reflect the policies of the society—shall not be considered or approved.

If KSA council were to allow the remittance of those funds, they would have to break that regulation, which only council can do with a two-thirds resolution.

KSA president Alex McGowan’s view on the regulation is that, “It’s not about saying yes or no to any religion, but about a desire to not be seen endorsing one or the other.”

When asked for comment, BS@K events coordinator Richard Hsia said in an email from June 10 that they were still in the process of obtaining the funds, and that “Whether or not we will actually be able to obtain them still remains to be seen.”

“We feel that it would not be appropriate at this time for us to speak with you regarding this topic,” wrote Hsia.

BS@K didn’t respond to further interview requests before press time, but McGowan says that the club will indeed receive their funds, for in the end, council did vote to override the regulation and remit the promised prize.

“They wanted to go to a conference that was very clearly a religious organization, and that violated the regulation,” says McGowan. “But the reason why I was leaning towards supporting it was because we didn’t make it clear in the initial prize draw and entry that this might be a problem.”

During council’s extended discussion on the topic on May 20, Langley campus representative Connor Griffiths said that, “It’s just letting them spend their money,” and that it’s not necessarily endorsement.

However, Naveen Zafar, the president of the Muslim Students Association, says “When you give funding for a religious or political event, you are technically endorsing them.”

Zafar has worked with the KSA in the past and is familiar with their policies. She agrees with the KSA’s regulation on grants for social, political, or religious opinions or causes.

“If you support one religious event, and then another religious group, it may get a little bit touchy,” says Zafar. “What if one gets a little more funding than the other? Then it makes it seem like the KSA is sort of favouring that group.”

Zafar says that if the MSA planned to organize their own religion-based event, the MSA would fundraise on their own to acquire any needed funding.

Zafar says the KSA’s regulation promotes inclusivity and student diversity. But Ethan Vanderleek, the Christian chaplain at the Surrey Multi-Faith Centre, thinks there is a different ideal that could be reached if the KSA were to abandon its current stance.

“I’m also of the opinion that religious neutrality is something of a myth,” says Vanderleek. “All of our fundamental commitments don’t come out of a pure, neutral standpoint. There’s prejudice at work in all of our positions.”

He says that there could be a conversation about why a Christian students’ conference could be an important part of what it means to be a Christian club at KPU.

“If there are students who are explicitly religious and that’s an important part of who they are,” says Vanderleek, “And they want to be a present part of the university community, it shouldn’t be shut down as far as I can tell.”