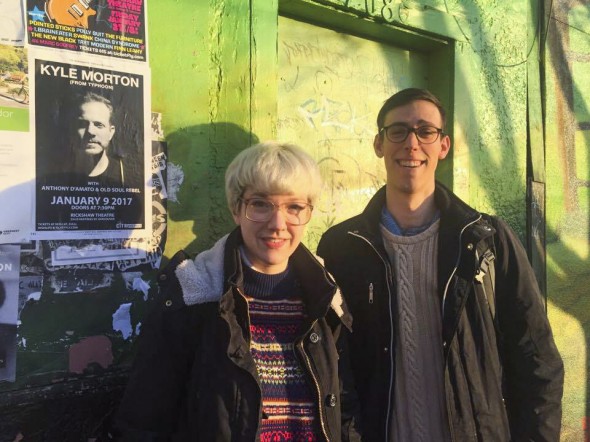 The title of Douse’s first full album, The Light In You Has Left, encapsulates the band’s bittersweet sound. Pensive and plodding, the art rock trio write profound songs often centred around subjects like relationships and personal growth. Where some experimental bands push musical boundaries to the point of obscurity, Douse falls comfortably into folk-based refrains that resonate rather than rattle.

The album leaves an astringent aftertaste, but not one lacking delicacy. As a debut LP, The Light In You Has Left defines the group’s style as tender, giving listeners something to look forward to in the years to come.

“It wasn’t like we really sat down to write a record. It was an accumulation of everything we’ve written in the past four years,” says guitarist and vocalist Alea Clark about their new record. “Some of it is stuff that I’ve written and the guys have written on top of. Some of it is stuff [guitarist] Patrick brought or [drummer] Jeremiah had been working on and we all finished together.”

As the sole lyricist for the band, Clark describes the album’s lyrical content as “a series of reflections on experiences” that she had, including themes of closure and resolution.

“If people take anything from it, I’m happy,” she says. “It’s not necessarily that we want people to get a specific message. I would rather someone interpret it as whatever they need it for if they’re going to listen to it at all. It’s just nice that people are listening. ”

It would be a slight to say that Douse belongs strictly in any one genre. Art rock is no more than an umbrella term to describe what they do, and in fact, the group has had trouble finding a scene where they feel at home in Vancouver. With a progressive rock-influenced guitarist, indie rock-loving drummer, and folk-inspired vocalist, it’s no surprise that they stand apart from the herd, but that uniqueness hasn’t prevented them from making their presence known both in and outside of the city limits.

Their first release, Offerings, made Independent Music News’ “Top 50 Unsigned Acts from Canada” list. The track “Lancaster” got airplay on CBC radio and won Douse the title of the Permanent Rain Press’ best band of 2014. In 2015 they toured across Canada without a hitch, and plan to dedicate 2017 to writing and touring as well—possibly out to Europe for two months and across Canada for a week.

Other than as a response to praise, the band’s confidence originates from the amount of work they have done together since forming, both as friends and professionals.

“You’re using so much of your personality writing that you need to learn how to cooperate in your darkest zones, because the music is pretty dense and heavily thematically and musically,” says Drummer Jeremiah Ackermann. “It’s vulnerable to write together, and so you learn how to work with your vulnerabilities with other people, and that was kind of a huge challenge.”

“We’ve gone through a lot that would break up other bands, so we feel pretty strong in the connection that we have together,” says Clark. “We all share a common goal, and that’s doing this and making it a success.”