KDocs Is About More Than Watching Movies 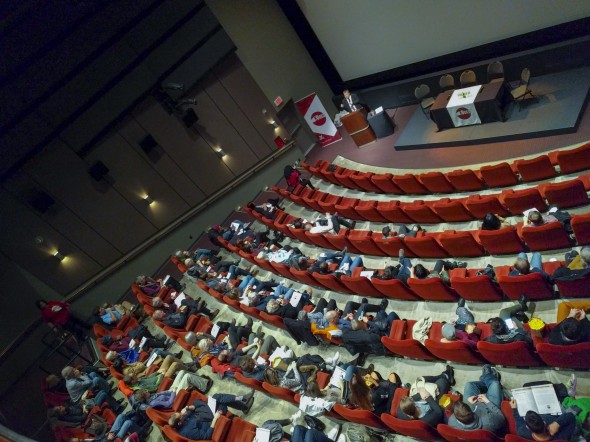 “Discussion is just as important as the film,” says Janice Morris, KDocs founder and festival director. She explains that rectifying the “dumbing-down of society through the power of images, moving images, and discussion with people you might not meet in your everyday life” is a fundamental part of the festival’s mandate.

Morris is convinced that public forums like KDocs offer attendees the opportunity to combat delusional thinking and anti-intellectualism through storytelling, dialogue, and global citizenship.

“We live in a political climate in North America where magical thinking is actually rewarded and affirmed politically and financially,” she says. “This always has to be questioned—and part of why it is not is because of this de-intellectualization.”

To Marrois, documentary films are a way for important issues to cut through the “massive inundation of information” that we go through in our daily lives. They convey complex ideas that newsfeeds and 24-hour news channels can not, and are even capable of showing us how some of the issues we face are interrelated to one another.

“Talking about the Syrian refugee crisis can be relevant to talking about the exploitation of migrant labour, or the environment, or a young Afghan rapper,” says Morris.

Associate Dean of Arts and KPU Criminology Professor Wade Deisman believes that events like KDocs are integral to any good university, as they help foster civic engagement, not only in students, but also in community members who otherwise might not be brought into conversations surrounding important topics.

“There is a movement afoot in the social sciences and arts called public criminology and public sociology,” he says. “The idea is that universities have, for too long, been ‘ivory tower’ institutions, but they ought to have more seamless contact with the community.”

Deisman specifically cites the film Do Not Resist, which offers a glimpse into the current state of policing in America, by noting that argues that Canada may not be as far from the surveillance state of the U.S. as audiences might think.

“It is tempting for people to suppose that our realities are dramatically different,” he says. “I think that is not at all the case. Militarization is happening [in Canada]. Police are being used in repressive ways here, and have been against Aboriginal and First Nation communities, and against social justice activists.”

Deisman, who also provided the keynote address for the afternoon, sees the film, cinematographer Craig Atkinson’s directorial debut, as a “cautionary tale for Canada.”

“This is an opportunity to get out ahead of the learning curve in terms of getting progressively mobilized to address [policing],” he says. “First and foremost people need to get informed about what the issues are, what the justifications are, what the rationales are, and then need to engage in discourse and discussion, for the purposes of surfacing their shared values.”

Cicely-Belle Blain, one of the co-founders of Black Lives Matter Vancouver, attended the afternoon screening of Do Not Resist, and was a panelist for the discussion period that followed. They admired portions of the film for its realism, and expressed the importance of remembering Canada’s history of racism and its problem with corrupt policing.

Speaking of the event, Blain was appreciative of the forum KDocs provides to activists such as themselves.

“[KDocs] is great. It is important for people like myself to come and provide that element,” they say.