The organization seeks to ease the painful transition of those forced to leave their home
Ashley Hyshka, Contributor 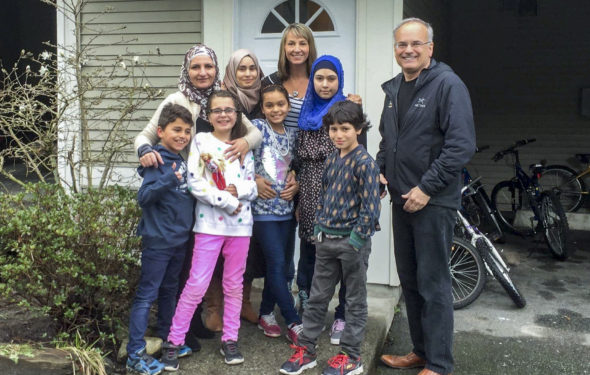 A promise made by Justin Trudeau during his election campaign has turned into real help for Syrian refugees in the cities of Coquitlam, Port Coquitlam, and Port Moody.

“I think that photo of that deceased little boy, Alan Kurdi, washed up on [shore]…that’s what woke everybody up,” says Teri Towner, Coquitlam city councillor and chair of the organization.

When news of the influx of refugees first broke, people in her city contacted Towner to ask how they could help. Towner remains amazed by the outpouring of support.

“Let’s harness the generosity and the outpouring from our community,” she says.

One effective method of outreach is social media. The organization has advertised various fundraisers online and the community has responded by donating clothes, bicycles, household items, money, furniture, and farmers market coupons to families of refugees. This led to refugees exploring the Tri-Cities and experiencing the vibrancy of the community, which creates a sense of belonging.

“Every single time that we have put out a call, it’s been answered,” says Towner. “We heard about one isolated mom who doesn’t work, and her husband goes to work, and her kids go to school, and she’s lonely. We teamed her up with another lonely [woman] … so they’ve become friends.”

Organizers of Tri-Cities Friends of Refugees  would like to see more refugees brought into the area, but due to Metropolitan Vancouver’s competitive and expensive housing market, it makes bringing in refugees—many of whom have large families—a challenge.

Last summer in Burquitlam, large dilapidated rental units sat unused and weren’t planned for redevelopment for another year. One of the developers who owned an apartment complex refurbished them, and 200 refugees temporarily moved in.

However, a fire broke out at the complex last July, leaving 52 people homeless. These families were aided by non-profit organizations and moved into subsidized housing across Metro Vancouver. Some families still reside at the Burquitlam complex, though they must move out by the end of July and are at risk for homelessness.

Mayor of Coquitlam and Volunteer Richard Stewart learned of a townhouse complex in Coquitlam with two vacant townhouses, both of which were severely damaged and uninhabitable. The non-profit organization who owned them removed them from the rental pool because they couldn’t afford renovations and handed the keys to Towner and Mayor Stewart. From there, local churches and developers collaborated and completed $50,000 worth of renovations, and two families—each a widowed mother and her children—moved in on April 1, 2017. One of the churches also donated a car to a family.

Seeing the two families move into their new homes was, in Towner’s words, “indescribable.”

Tri-Cities Friends of Refugees’ goals for the future are to find immediate housing for the remaining families at the Burquitlam apartment complex. They’re also aiding refugees in finding employment and maintaining friendships, and they want to inform incoming refugees of their organization.

“They will have bright futures,” says Towner. “As a society [we] can help build them up, and we all benefit when people in our community succeed and thrive.”