The Thin Line Between Support and Enforcement on the Surrey Strip

The Surrey Outreach Team was created to provide support for the homeless on one street, but critics argue they do more harm than good
Joseph Keller, Staff Writer 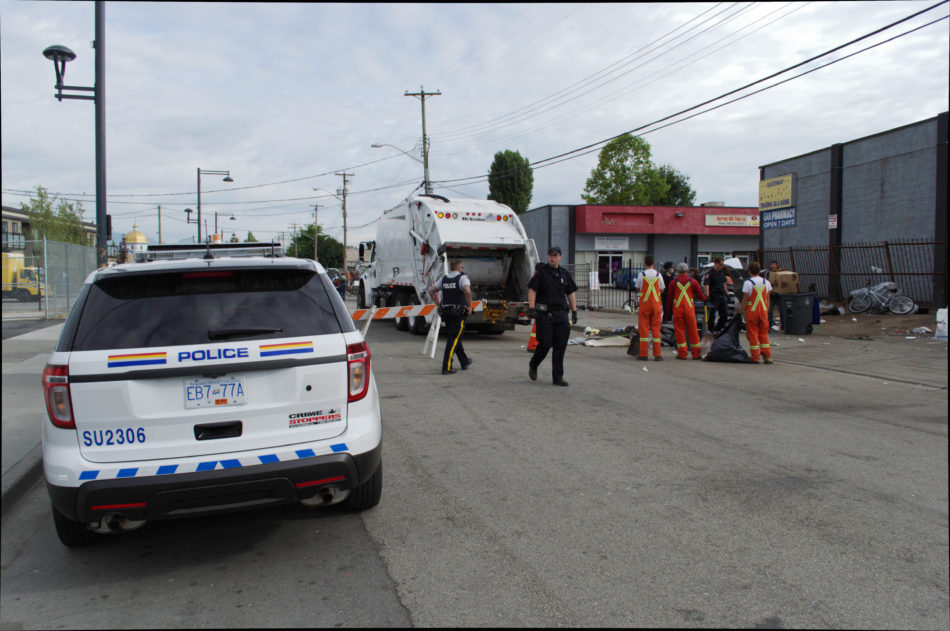 On Wednesday mornings, homeless people living on 135A Street are instructed to clear their belongings from the street so that a garbage truck and street cleaner can move through. People rush to remove their tents and belongings before they are lost to the trash compacter. (Joseph Keller)

According to the city, the Surrey Outreach Team was created as a means of providing comprehensive support for people living on the Surrey Strip, and since its launch last December it has shown some encouraging results.

Critics, however, argue that centering resources around a single stretch of road overemphasizes police enforcement, and focuses more on hiding Surrey’s homeless population than improving their quality of life.

“The whole focus seems to be keeping people contained on this one little strip of cement,” says PJ Lilley, a Whalley resident and member of the Surrey branch homeless advocacy organization Alliance Against Displacement.

135A Street and the area around it—which is often referred to as the “Strip”—has long been a spot for Surrey’s homeless to set up camp. The city’s homeless population has grown significantly over the past few years as the affordable housing crisis has forced more people out of their homes and onto the street, and their situation is made all the more dangerous by the ongoing opioid epidemic.

In response to this, the city launched the Surrey Outreach Team, which consists of 12 RCMP officers and four city bylaw officers, all dedicated to the area around 135A Street. The team is also partnered with organisations such as Fraser Health, which operates a safe injection site on the Strip.

At the time of the Outreach announcement in December, Surrey Mayor Linda Hepner told the media that the team would “provide 24/7 visible presence of police, bylaws, and social services to help those in need, increase the public safety and the protection of property of area businesses and residents, and target those who are preying on the vulnerable in the area.”

“In the past, the primary function of the police in that area has been enforcement … but now our focus is supporting the homeless and addicted and the people with mental health issues,” says Corporal Scotty Schumann, an RCMP media relations officer.

Today the Strip is home to over 50 people. The left side of the street is lined from end to end with tents and the worldly belongings of their inhabitants. On the other side is a shelter operated by Lookout Society, which provides food and some beds, the Fraser Health safe injection site, and a small, recently constructed building that operates as a base of operations for the RCMP.

Where the city’s efforts have undeniably been successful is in preventing overdose deaths. The Vancouver Sun reported in February that there has been a marked decrease in visits to Surrey Memorial Hospital for overdoses, and Schumann says that calls to the police for assistance to the area have also dropped dramatically.

“That can be attributed to several things, but certainly the police are a part of that,” says Schumann

Still, a visit to the Strip quickly reveals that life there remains grim. While organisations like Lookout Society and NightShift Street Ministries do their best to keep basic necessities readily available, many other basic needs are barely being met. Three portajohns are available and are emptied regularly by the city, but the job of cleaning them usually falls to the residents of the Strip who choose to step up for the unpleasant task. A single shower is available at the shelter, and the wait to use it usually takes days. 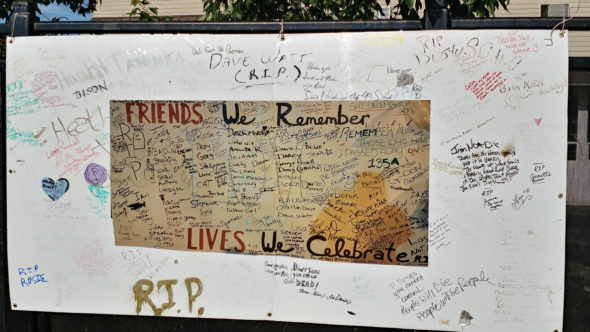 A board memorializing people who have died while homeless on the Strip is maintained by residents on 135A Street. (Joseph Keller)

While homeless people living on the Strip are free to come and go as they please, there is a perception among them that the area functions as a sort of “open-air prison.” Schumann says that the RCMP never forces anyone to go to the Strip, but since camping is heavily discouraged in most other parts of the city and people doing so risk losing their belongings, the Strip is effectively the only option for many who are forced to sleep outside in Surrey.

As far as Lilley is concerned, city resources would be better spent on more social housing programs. She believes that regular, heavy police enforcement is the wrong approach to outreach.

For those living on the Strip, holding on to what few personal possessions they have is a full time job. This was true before the launch of the Outreach Team, but according to Strip resident Tim Carter, the new procedures brought in by RCMP bylaw officers have made keeping their belongings more difficult.

“Our normal existence, the thing we gotta do every day, is run around and make sure we’re all tidy when the police and the city come by so that they don’t take something dear to us,” says Carter.

He says that he has had officials take away items that are deemed “not necessities,” and that when items are left unattended they are often thrown away. Personally, he has seen people lose military medals, pictures of family, medication, and electronics.

“They technically want us to carry everything in a backpack and that’s impossible. For me, I can’t even dream of that,” says Carter.

“For anyone who thinks we’re just a lazy lot, I guarantee that me and a lot of my friends work harder than most people do at jobs just to keep what we have,” says Zach, another resident of the Strip, who preferred that his last name not be published. 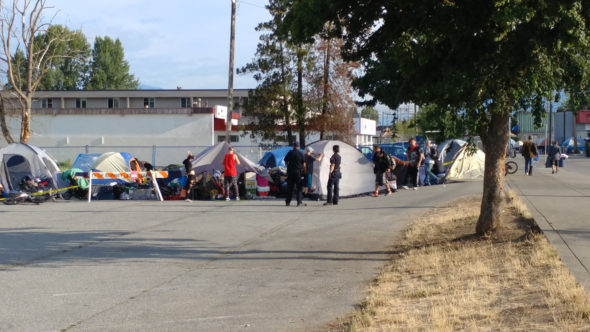 Homeless residents’ tents and belongings are placed temporarily in the Surrey Legion parking lot while city crews prepare the Strip for a weekly cleaning. (Joseph Keller)

On Wednesdays, the city cleans the street in a process that can be the most stressful part of the week for homeless residents. People are given a warning at 6:30am that, at some point, a garbage truck and a cleaning crew will be coming through, and anything left in its way will be lost to the trash compactor. The morning is often a mad rush of activity as people try to save their belongings.

The Outreach Team’s 12 officers dedicated exclusively to monitoring the small stretch of street make many of the people living there uneasy. Police make an effort to know everyone who stays on the Strip, which means checking IDs of all new arrivals and doing head checks to see who is staying in each tent.

Schumann says that the RCMP is not there to conduct surveillance on the people of the Strip, but that an important focus for officers on the Outreach Team is building trusting relationships with the people there.

For many of the people on the Strip, however, that trust is simply not there. Carter says that he has seen and experienced tense arguments between officers and homeless people that quickly become violent. He believes that many people there are afraid to speak to police when they have problems.

Long-time Strip resident Jen Weeks says that she has both seen and experienced verbal abuse from officers, although their conduct varies from night to night. She believes that some of the officers are strongly biased towards the homeless who live there.

These reports are echoed by homeless advocates like Lilley who have seen similar incidents between homeless individuals and officers while on the Strip. Erin Schulte, an advocate and founder of the Surrey Pop Up Soup Kitchen movement, told The Runner in July that she has seen the police treat the homeless in the area unfairly.

“They’ve got the worst job in the world some days,” she said. “But there’s a way that you have to treat humans and there’s a level of respect, even when they’re not respecting you.”

In response to the critical reports made by people on the Strip, Schumann asks that any issues be brought to the attention of the RCMP.

“We’re professionals and we expect a high level of professionalism from all of our officers, and that means treating all persons with respect,” he says. “I can just say that if someone takes issue with the way they’ve been treated by an officer, there are several complaint processes that are available, and those issues can be worked through.”