Her set was equal parts raunchy and hilarious 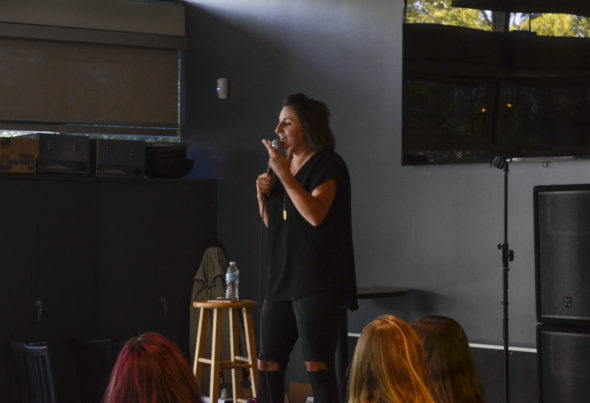 Toronto-born comedian Steph Tolev returned to the Grassroots Cafe on KPU’s Surrey campus for a little lunchtime comedy on Sept. 21.

Her set, much like the one she performed last year at the same venue, was wild, raunchy, and hilarious. The comic told jokes about what it’s like to be the creepy aunt and her vagina’s fondness for the soothing and cleansing properties of the ocean.

If laughing at weird sexual encounters isn’t your thing, you may have found yourself struggling to keep up with Tolev’s absurd comedy, but the comic was fortunately met with laughter and engagement from her audience. Tolev’s opening act—a mystery comedian known as Pat—was also a hit. Exuding social awkwardness, his cringe comedy was the perfect primer for Tolev’s deeply disturbing, and all too relatable, humour.

“I thought both [comedians] were hilarious,” says Denzil Muncherji, a recent KPU graduate who wasn’t able to attend Tolev’s show last year but made a point to come out this time. “You need to have some kind of entertainment along with the constant studying.”

Though Tolev notes that the turnout may have been a bit higher at last year’s set, she says she’s very happy with how receptive audiences at KPU are to her work.

“I always feel like the university audiences are a bit more timid,” says Tolev. “They laugh at stuff that’s gross, but I feel like, at the same time, they’re kind of shy. You’re going through a weird time in your life and you don’t want to hear some gross woman yelling about her puss for an hour, but I find [student audiences] usually really fun and easy to talk to.”

Tolev attended Humber College’s comedy program in Toronto, and worked tirelessly to pursue a career as a comedian. After graduating, she moved to Los Angeles, where she now resides.

“I’m out pretty much every night. I do probably four or five [shows] a week,” says Tolev.

With a slew of awards, two full-length sketch comedy albums, and experience at many notable comedy fests—such as Just for Laughs Comedy Festival and both the Toronto and Vancouver Sketch Fests—on her resume, Tolev’s work has certainly paid off. She was celebrated as the “Best Female Stand Up” at the 2015 Canadian Comedy Awards and received a number of nominations for her sketch comedy duo Ladystache. She’s also scored well on iTunes with her solo stand up album Hot N’Hungry, released January 2016.

“I think when I started, there wasn’t this whole boom of people liking female comics. I was just one of the guys and had to become funnier, otherwise I’d get, ‘Who’s this fuckin’ chick?’” says Tolev. “I don’t really ever find it hard now, but sometimes you are the only girl in the show.”

Being a female in the industry doesn’t seem to be as challenging as it once was, with an increasing number of profound and influential female comics thriving in it. Tolev’s recommendation for anyone who has told her or other female comics, “You’re really funny for a girl,” is that they “go fuck themselves.”

“I know a majority of female comics get that, and it’s so rude. It doesn’t make sense,” says Tolev.