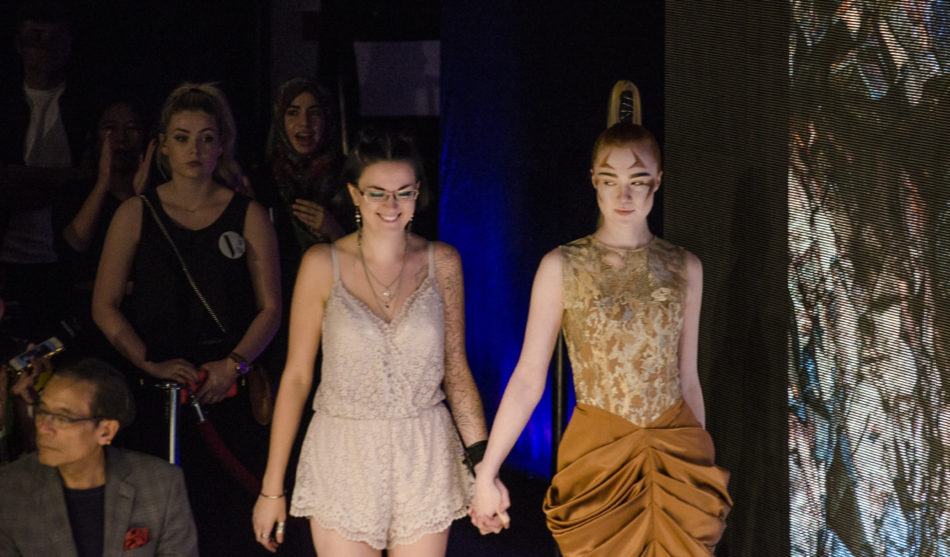 Backstage at Vancouver Fashion Week, a soft violet glow envelops the models as they prepare to walk the runway.

Sam Stringer, graduate of Kwantlen Polytechnic University’s fashion design program, has been waiting for this night for a long time.

Stringer unveiled her 2018 “Embers and Ashes” collection at Vancouver Fashion Week, which was held from Sept. 18 to 24. This was her second time at VFW, and she describes her new collection as being “inspired by the colours of Mars and the sunset on Mars—so lots of rusts and charcoals and teals [and] a little bit alien-esque, a little bit futuristic.”

Prior to the unveiling of “Embers and Ashes” Stringer felt anxious, but also “really excited to see the collection actually on bodies on the runway.”

“I’m working with some incredible women, and I’ve been working with them one-on-one for months, so finally seeing it go down the runway is really exciting,” she says.

“I definitely felt like a warrior queen walking down there,” says Rachel Sargeant, one of the models who debuted Stringer’s collection at VFW this year. “I haven’t been this excited and nervous for a runway show in a long time.”

The crowd was buzzing with excitement during the show, and carried on the air was a feeling of female empowerment. Another of Stringer’s models, Justine Felizarta, says wearing Stringer’s designs made her feel “empowered” and attractive.

Stringer’s success derives from a blend of natural talent and perseverance, but her beginnings were quite humble. Hailing from Victoria, B.C., she had childhood dreams of becoming a fashion designer that led her to start sewing at the age of eight.

Eventually her grandmother taught her how to use a sewing machine, and sewed her classmates’ graduation dresses at school.

When she was ready to attend post-secondary school, Stringer scoured various fashion design institutions across Canada and internationally before eventually deciding to go to KPU. Now she says that attending KPU was the best decision she ever made in terms of establishing her fashion career.

“I wanted something hands-on and I wanted something marketable and something that I can actually make a career out of,” she says. “This program really appealed to me because it’s a four-year degree program. It’s the only degree-granting program of its kind in Western Canada.”

In October of last year Stringer began working at KPU as the program assistant for the fashion department, allowing her to teach the newest generation of fashion designers while still working within the industry.

“The connections that the program has to the industry really helped—especially with my business, because my business is a lot of networking and meeting people and meeting women in Vancouver who need gowns and evening wear,” she says.

Stringer described the fourth and final year of the program as “intense,” noting that, the day after she did her KPU graduation fashion show in April 2016, she was approached by Vancouver Fashion Week about sponsoring her to appear in the fall event.

“I spent that entire summer sewing—like a little sweatshop in my apartment—and I made an entire collection and showed last September,” she says. “I got a great response from that show.”

Stringer was approached again by VFW in 2017. While brainstorming ideas for her new “Embers and Ashes” collection Stringer studied the forecast trends for 2018, which rely heavily on a monochrome colour palette and metallic style. She blended these elements with her own, unique aesthetic to create pieces that are “quite fiery and elemental, but also a little bit more subdued.”

She also chose to design pieces for women of all different shapes and sizes—from size 2 to size 14. Stringer says that one of her goals is to “celebrate the diversity of shapes in women.”

As a photographer, Stringer began shooting professionally when she moved to Vancouver and was hired by VFW. She covered the event for eight seasons both in the pit and backstage.

“It’s a good fusion for me,” she says. “It’s very handy to be able to shoot my own campaigns.”

In addition to her work in Vancouver Fashion Week, Stringer designs evening wear with a focus on “high-end, luxurious evening gowns.” Her pieces are often floor length, black tie, bridal and graduation gowns for women, but she says in the future she’d like to design evening wear for men as well. Silks, draping, and comfortable fabrics are also a staple of her brand, and she typically includes embroidery, and embellishments, which she calls “artistic and ornate pieces.”

Following the show, Stringer could be seen backstage beaming as one-by one her models congratulated and hugged her.

“I came back for a couple very special people this season, and Sam’s one of them,” says Sargeant. “She’s an inspiration.”