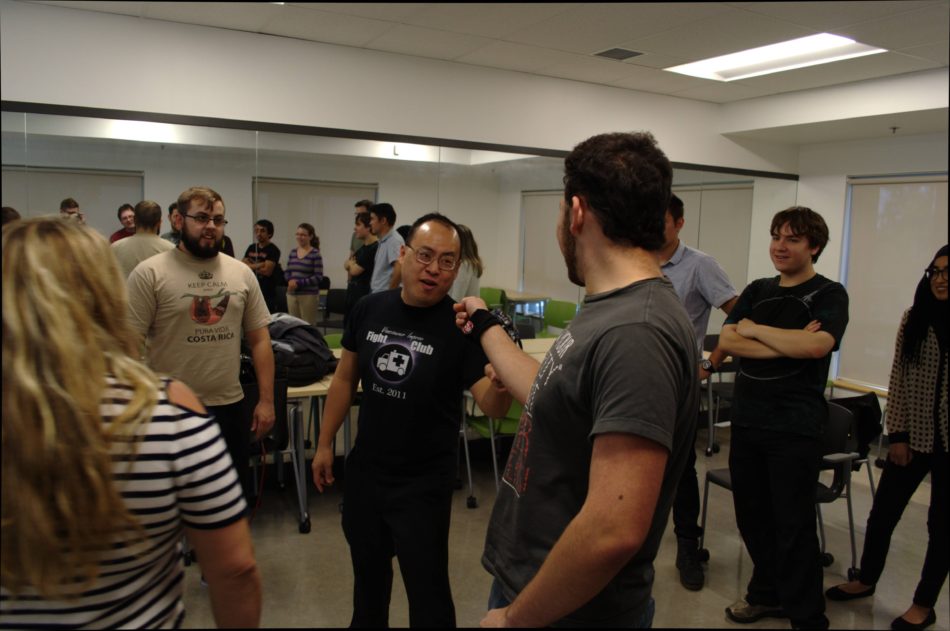 Kwantlen Improv has returned for a second season, and as any good improviser would do in the middle of a scene, the workshop’s host and founder Daniel Chai plans to build on what came before.

Chai, a KPU graduate and local improviser, hosts the workshop every Monday at 5:00 pm in Birch 250 on the Surrey campus. Attendees learn the art of improv, which is a form of theater where performers create plot, characters, dialogue, and comedy on the spot with no prior preparation. Kwantlen Improv is open to experienced performers and those who are new to the craft.

The weekly sessions are free for KPU students, $5.00 for KPU alumni, and $10.00 for anyone else who wishes to attend.

“Kwantlen Improv is meant to be a fun place for people to try out new things, learn some new things, and most of all, make some new friends,” says Chai.

The first week of Kwantlen Improv’s second season was attended by more than 20 new and returning improv enthusiasts—a major improvement from the group’s debut. When the workshop began last year, the word had yet to get out to the KPU community, and only a couple of people went to the initial event. Since then, the group has grown every week, with new faces showing up to each session.

“The evolution of Kwantlen Improv is that students who are returning obviously feel like they’re learning stuff, which is exciting,” says Chai. “Also I’m glad to see that the students are bringing friends and colleagues in as well.”

KPU student David Camparmo was one of three attendees to show up for the very first Kwantlen Improv session. Since then, he and Chai have watched the group grow into what it is today.

“It’s great that it’s grown in size so we get lots of different views because people always react differently when put in the situations of Improv,” says Camparmo.

Among the newcomers at the first session of the new year was student Danica Alain, who was interested in checking out Kwantlen Improv because of her memories of watching improv shows like Whose Line is It Anyway?.

“It’s kind of a good introduction without being too overwhelming, because I wasn’t too sure what to expect, but it started out really simple and so that’s pretty nice,” says Alain.

Another new addition to Kwantlen Improv was student Leo Chang, who says he’s interested in improv as a way to put himself out there and work on being more extroverted.

“I’ve always been a very big introvert so whatever I do right now—talking to people, networking, whatever it is—I’ll learn. But deep inside I still have that little introvert guy,” says Chang. “So this was a little nerve wracking, being in front of people, but at the same time there’s no judgment. Everything was good and everyone was accepting.”

Chai says that he plans to focus this year’s sessions around what he calls the “Improv Alphabet” which takes many of the concepts integral to improv and categorizes them alphabetically. The concept for the first session was “acceptance,” which encouraged performers to accept whatever their partner introduced and work with it.