The Risks of Health-Care Work 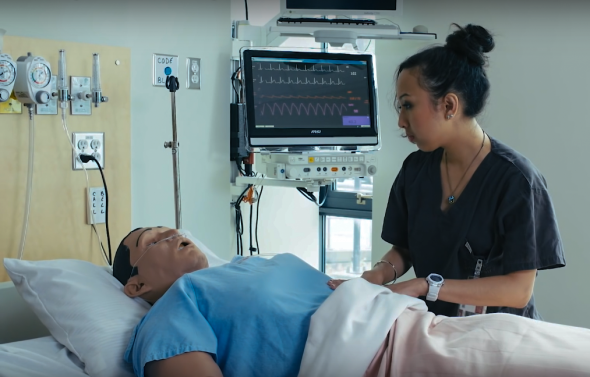 Health-care workers have one of the most dangerous jobs in B.C. according to workplace statistics. As found by data from WorksafeBC from 2012 to 2016, providers of patient care report more time-loss injuries than those in any other profession in the province.

The workplace risks associated with a career in health-care were a major topic of discussion at this month’s Hearts and Hands Conference, a gathering of health-care workers in Vancouver and Victoria on Oct. 3 and Oct. 26 which was hosted by WorksafeBC and partially sponsored by Kwantlen Polytechnic University.

The Dean of KPU’s Faculty of Health, Dr. David Florkowski—who was previously employed by WorksafeBC—says that a lot of the risk for health-care workers comes from the patients themselves. Health-care workers understand that people coming to them for help are often in extremely vulnerable positions and under intense mental and physical stress. This can lead to incidents of physical aggression from patients towards their health-care workers.

Exacerbating the risk, according to Florkowski, is the issue of fatigue and stress on health-care workers. These professionals are frequently subject to working extremely long hours under high amounts of stress without having a proper rest. This can commonly lead to workplace accidents.

KPU’s health-care programs have to prepare students for the risks of the job, which Florkowski says is paramount to helping lower workplace injury rates in the health-care sector. He says that on-the-job training is the the most important aspect of making sure that students are ready to deal with risks when they step into the field. Such placements allow students to see the methods of risk minimization that they are taught in the classroom in action.

Students begin by shadowing experienced professionals and gradually transition into carrying out the duties themselves. Inevitably, they will witness incidents that demonstrate the challenges of the job and will be debriefed on how to respond.

“We can do all the theory we want in the classroom, but until we put students into the hospital setting and they’re right there with that patient, that’s where the student is going to connect the dots and really get what we’re trying to get at,” says Florkowski. “But we have got to put the student in that state to really say, ‘Is this job for you?’”

Instructors in the Faculty of Health talk to students about the workplace risks early on in their education so that they understand what they are getting into and what they need to do to minimize the risks to themselves, their patients, and their coworkers. Body mechanics is an important aspect of training, and students invest a significant amount of time in learning how to move immobilized people without injuring themselves. The programs also include multiple courses dedicated to developing communication skills so that students can identify potential hazards and de-escalate potentially confrontational situations with aggressive people.

Tamira Nicholls, President of the Faculty of Health Student Association, considers these communication techniques to be among the most important skills she has learned through KPU’s nursing program.

The cost of replacing health-care professionals provides ample financial incentive for the industry to protect its workers. Still, Florkowski believes that more can be done to minimize workplace injuries. He says that there is a common theme in the industry of hospitals trying to be as frugal as possible, and that the subsequent understaffing increases the stress put on the few workers on shift.

Florkowski explains that there are multiple models for addressing potentially aggressive patients that are often best applied on a case-by-case basis. However, hospitals rarely have the resources to do so.

“Focusing on the best patient-centered care for that specific client at that specific time and putting that support structure in place, often the hospitals don’t have time or resources to do that for every single client. But that would technically lead to the best outcome for that client as well as the health-care worker,” says Florkowski.

Ultimately, it’s up to each individual student to decide for themselves if they are the type of person who can handle the risks and stress associated with being a health-care professional. Florkowski has known plenty of people who have left the field because they couldn’t deal with the risks involved. Still, Nicholls says that her education has made her confident that she can handle such a difficult, and important, job.

“I really feel that I’ve gotten all my skills together and I’ve gotten the chance to say, ‘Yes, I can be a nurse now,’ and I feel very confident now in my skills and my ability to communicate and my skills to prevent injury,“ she says.