Despite having more students than ever, KPU’s governmental funding has not increased proportionally 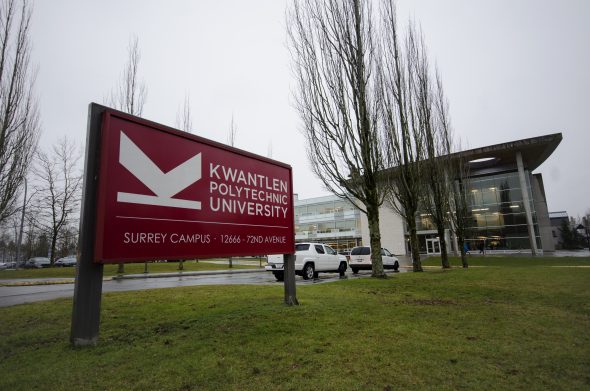 Despite a continued increase in the student population, KPU’s government-sourced operating grant has been decreasing since 2013. (Braden Klassen)

According to an article by Business Insider Vancouver, operating grants—or funding that the provincial government provides to its public colleges and universities—at B.C.’s largest post-secondary schools have not been able to keep up with enrolment numbers. This means that UBC, SFU, BCIT, UVic, and KPU have all welcomed an increasing number of students while governmental grants have not risen proportionally with their student populations.

A $15 million provincial cut to higher education funding greatly affected the base grants. Alan Davis, President and Vice Chancellor of KPU, says that the change in government affected the budget cut, but that those funds haven’t been replaced despite the fact that the NDP is now in power.

“The new government has only been in power for a few months. The previous government was really focussed on a balanced budget and everybody was subject to that … whether it was a good policy or not,” says Davis.

KPU generates its revenue from a variety of sectors, including government grants, tuition, fees from both domestic and international students, and other ancillary sources such as the bookstore. The government tends to provide grants in order to support a particular initiative—either for buying equipment or providing capital that the university can allocate for renovation or development.

“You have to separate the annual operating money from the long-term capital money,” says Davis.

“[Research universities] need to be supported, but I don’t think they’ve endured as much as we have in … trying to meet all of the [public’s] needs,” says Davis.

Davis understands that universities like UBC and SFU have more expenses than KPU, but he would like to see the province make a larger investment in education for all post-secondary schools.

“We believe that the communities will be stronger if there is more opportunity for post-secondary education that’s well-funded,” he says. “We just want to be able to provide quality, access, and opportunity for our students.”

KPU administration will continue talking to members of the provincial government about evenly distributing funding levels, including operating grant amounts, for all post-secondary schools.

“I think an independent review of funding levels across the system is warranted so that every institution and community is treated fairly and that the supply and demand of funded post-secondary seats better reflects the population,” says Davis.