Think twee, glitter, and cutesy indie films to get an idea of Future Star’s “quieted down pop” 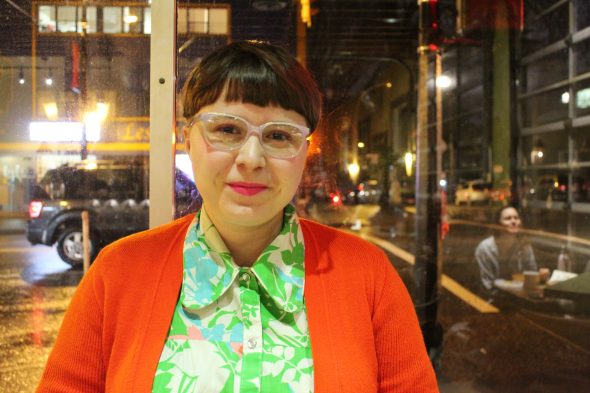 The band is currently a two-piece formed in 2016 by Kay, a long-time Vancouver musician, who invited her friend and producer Christopher Ellis to join as a percussionist. Although the lineup and name of the group has changed over the years, it has remained Kay’s personal project—a place to parse through feelings and ideas that otherwise only she would be privy to.

“A lot of people are like, ‘Would you ever have bass in your band?’ and I’m like, ‘No! The whole point is that there’s space there and that it’s kind of intentional,’” says Kay. “I like the idea of everything being contained within the keyboard.”

Between 2012 and 2014, Kay went by the name Where You’ve Been, That’s Where You’re Coming From. Before then, she was in bands such as Kidnap Kids and True Crush. Kay’s first instrument is the keyboard, which she picked up in high school and now exclusively plays in Future Star, but bass, flute, and xylophone have a place in her arsenal of musical gadgets as well.

Nevertheless, her current project is distinctly understated. Where many veteran musicians write exceedingly complicated, niche-pleasing songs as they bolster their reputation in the scene, Future Star stays true to its strengths by writing half-sweet, half-somber melodies that make use of the emptiness left between drum hits and synth chords.

Somewhat surprisingly, Kay is inspired by some of today’s most famous female pop icons. Her subtle approach to writing seems at first a far cry from the larger-than-life radio hits produced by stars like Kesha, Charlie XCX, and Carly Rae Jepsen, but beneath that is a sugary-sweet pop structure that betrays her loyalty to the genre.

“There was one time I tried to write a song like Carly Rae Jepsen and it didn’t work at all. I don’t know how to do that,” she laughs. “I never aimed for that sound, but at the same time, that’s the stuff that I listened to a heck of a lot when I was growing up and I’m sure it’s influenced me.”

She continues, “Generally, I just write about a thing that’s happening right now, a feeling that I’m having right now. I’m not the same person that I was two or three or six years ago. My priorities have changed.”

Future Star has released three records in the past: 2016’s Try Hard, an eight-song CD in December called Who Cursed Me Then Cured Me, and between the two, an 11-song cassette. The band’s next record, Cryorities, will be available online in the first half of April with a physical release planned for April 13.

For the first time, there will be a third instrument on Future Star tracks featured on the record—a friend of the band, Ridley Bishop, is playing saxophone on two songs as well as other instruments on Cryorities’ first track.

“I sing about crying a lot,” says Kay, about the name of the record. “I just like the idea of choosing what you’re crying about, being a grown up.”

For those interested in seeing the band live, Kay and Ellis will be playing on Feb. 25 with First Boyfriend and at the Cryorities release with Necking, Wind Up Birds, and two poet-comedians. Future Star’s recordings are available on Bandcamp.