Though a total ban on smoking is severe, it will likely have a positive effect 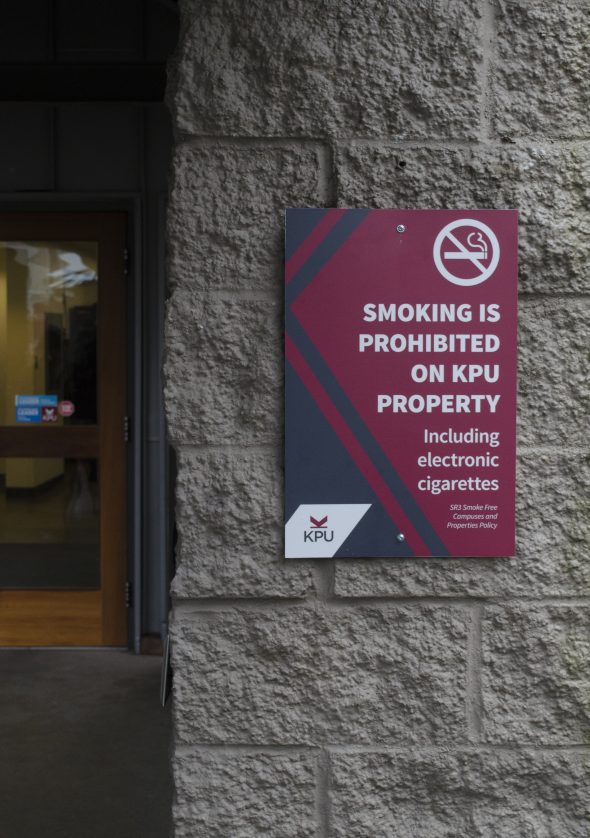 The university has posted signs up around all of the campuses that prohibit people from smoking on KPU property. (Braden Klassen)

Kwantlen Polytechnic University became smoke-free on Jan. 21, with the announcement being made via email to students and faculty at the end of Sept. 2017.

Other post-secondary institutions in Canada have also made the switch to smoke-free campuses, with more than 10 boasting 100 per cent smoke-free policies, including Emily Carr College of Art and Design in Vancouver and Trinity Western University in Langley. KPU has now joined the list of institutions taking a step towards creating public areas with clean air, hopefully incentivizing people to quit or at least reduce their smoking habits.

KPU President Alan Davis showed enthusiasm for the new policy, which prohibits all smoking and vaping on university properties, including inside personal vehicles parked on campuses. Many students find this part of the policy particularly severe.

The decision for KPU campuses to go smoke-free came after two years of deliberation about policies to regulate smoking-related activities. The university administration says it received complaints about smoke on campus, even while the school was complying with all provincial by-laws pertaining to smoking.

A non-smoking Langley student, Brad Prato, is critical of people who smoke on university campuses.

“It sucks to be discriminated against for the group you’re in, but also it’s a conscious decision to be in that group,” he says.

Prato’s sentiments are echoed by another non-smoking student in Langley, Emily Chabot, who feels that students who leave campus for a smoke break are “making the conscious decision to allow it to impede [their] education.” Navjeet Phagura, a first year non-smoker, also notes that “for some people, [smoking] is not appropriate to their religion,” or for those with respiratory problems.

Although these students agree with eliminating second-hand smoke from KPU, others find the complete ban of smoking on campus to be too severe. Instead, they would have liked to see the creation of a designated smoking area on campus. Even as a non-smoker, Nick Coers says that he doesn’t “believe in dictating other people’s health.”

“We’re always talking about how a healthy body creates a healthy mind, so I get that [smoke-free policies are] being linked to education and mental well-being,” says Victoria Nylander, a non-smoking student in the Health Foundations program. Overall, she describes herself as neutral-positive to the policy.

Personally, this ban reminds me of an experience I had in high school. No tobacco products were allowed on school property, so smokers would congregate at one point close to the school to smoke, leaving their butts littered in the area. I hope that this doesn’t cause a litter problem outside of the limits of campus, as cigarette butts pose a huge environmental threat.

That aside, I do think that the university’s policy could be the extra incentive some people need to kick their smoking habit, and perhaps the larger KPU campuses could provide some sort of relief room for people dealing with nicotine cravings. For those trying to quit, B.C. offers three months worth of quitting aides per year, which more people should take advantage of.

While I think the policy is drastic and a bit stern for banishing smoking completely, myself and many other students on the Langley campus think that it could bring about a positive change at KPU.