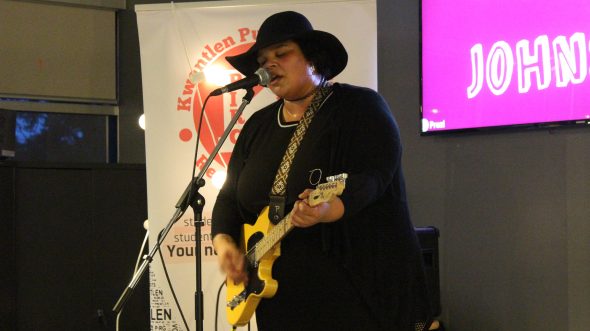 Students, KPIRG directors, and curious passersby listened as Vancouver-based singer-songwriter Chelsea Johnson belted out her songs during a Feb. 28 performance at the Grassroots Cafe.

The event was held by the Kwantlen Public Interest Research Group as part of a string of events celebrating Black History Month. KPIRG Outreach and Communications Coordinator Idil Isse says that the organization planned the event because it believes that “the arts are an integral part of social movements and social change.”

“We wanted to make sure that we highlighted and showcased talents that aren’t recognized as often as they should be,” says Isse.

Isse remarks how Johnson is also a voice for issues pertaining to gender, sexuality, and race.

“Her lyrics are very universal,” she says. “Her presence in the music scene in this province is definitely noteworthy.”

But growing up, Johnson’s path in life wasn’t always focused so heavily on music.

During a Q&A session with Isse, Johnson—who originally hails from Sydney, Nova Scotia—said that her start in music began with being inspired by her mother, who is also a singer-songwriter. She grew up with her mother, grandfather, and extended family and started performing in musical theatre when she was five.

When she was 13, her father, who she didn’t know previously, unexpectedly called her and invited her to live in the United States with him. Johnson said that she needed a place where she could flourish, “work out all of [her] weird kinks and be a weirdo and a freak,” and that she felt she would be able to do that if she packed up and left her hometown.

Later, she received the opportunity to move to Vancouver and says that she thought, “Hell yeah, I need to get out of here.”

Upon moving to Vancouver in 2004, she flirted with taking part in poetry slams and thought she would become an actor. She later befriended Mighty Mike McGee, C.R. Avery, and Shane Koyczan, and together the group collaborated on an album.

“It kind of brought me into the idea of being a working musician,” says Johnson.

Beforehand, she had always viewed music as something she did casually with her family. She admitted that learning from her mother is how she developed harmonies and unknowingly began her training as a singer. She even auditioned for Canadian Idol in 2001.

In addition to her solo work, Johnson is currently in two bands—High Society, who she calls “a bunch of East Van cats”, and a duo called Old Soul Rebel with her friend Lola White. White plays electric banjo and Johnson plays electric guitar.

Johnson says she hopes people can “find medicine and a bit of therapy” in her music, and in the process will also see her as a person they can relate to.

Isse wasn’t sure how many people would attend the event, due to it being a hectic time in the semester for university students, but she was happy to have Johnson perform for any attendees who just happened to be in Grassroots.