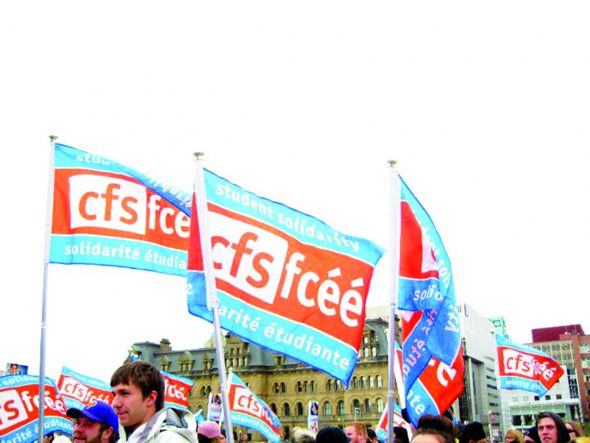 The Canadian Federation of Students was founded in 1981 and is the largest student organization in Canada, representing hundreds of thousands of post-secondary students. (File Photo)

The Canadian Federation of Students is preparing to sever ties with the British Columbia Federation of students and its 12 member associations, also known as member locals.

The motion to expel the BCFS and its member locals was approved by the CFS executive and will go to a vote at the CFS national general meeting in June. The move comes after years of bitter infighting between the two student organizations.

The BCFS has expressed support for the motion that will see them expelled from the national organization, which is expected to pass with favour from all parties at the June meeting. As a CFS member local, the Kwantlen Student Association will be sending its executive committee to vote on the motion.

The vote may end a long history of dispute between the CFS and BCFS. Simka Marshall, Chairperson of the BCFS, says that allegations of electoral fraud and corruption within the national federation have caused the member locals in B.C. to pursue independence, although bylaw restrictions have prevented them from holding a referendum to separate.

To strengthen their bid for independence, the BCFS recently began offering its members many of the services that have historically been offered by the CFS. This, in the BCFS’ view, renders the CFS irrelevant to B.C. student organizations.

“All of these steps or actions that have been taken to move in a direction of focusing on provincial work and moving away from the national organization, these have all been at the direction of our memberships,” says Marshall. “It’s those student leaders from around B.C. who are having us take steps to do everything that we can to move away from that corruption in the CFS and to focus everything that we can in continuing to do good advocacy work.”

According to her, the BCFS has had much more success with their advocacy work since distancing themselves from the CFS.

“A national organization is something that should be both relevant and effective, and the CFS is just neither,” says Mitchell.

Due to the animosity between the federations, the BCFS has been withholding the membership fees of its locals from the CFS, which has put the BCFS members in bad standing with the national organization.

Peyton Veitch, Treasurer of the CFS, says that the conflict has caused massive problems for both federations. The legal battles and infighting have been expensive and time consuming for both sides, and the the conflict has cast a shadow over national general meetings. He says that the situation has hurt morale and hindered productivity. Veitch adds that there is a backlog of motions from two years ago that have yet to be voted on because of the conflict.

“It’s been disruptive in terms of our ability to conduct business. It’s been disruptive in terms of the focusing of national executive time on this issue as opposed to other ones that affect students,” he says. “I think that the same can be said for the leadership of the BCFS. It hasn’t been pleasant for them either. I know that they care about doing right by their members and it’s been something that has occupied a lot of their time and energy as well and I regret that.”

As part of the separation, the CFS will not be pursuing any of the unpaid membership fees from the expelled members organizations.

“Ultimately, we’re not interested in a protracted battle over fees after this position is ratified,” says Veitch. “We’re interested in moving on and resetting the relationship and allowing us to get back to working for students.”

The conflict puts the Kwantlen Student Association in a particularly odd situation. The KSA has been seeking independence from both the CFS and BCFS for years. In 2013, the KSA attempted to hold a referendum to leave the BCFS which sparked a lengthy legal dispute, as the BCFS argued that no such referendum would be valid due to outstanding membership fees. The case ended early this year, with the court upholding the KSA’s referendum to leave.

However, because the KSA is no longer a member of the BCFS, it will not be one of the 12 member locals expelled from the CFS. The KSA will remain a member of the CFS and will be expected to continue paying fees to the national federation.

Had the legal dispute ended a couple of months later, the KSA may have gained the freedom from both federations.

Still, this circumstance does present a potential opportunity for the KSA. It is one of only two student unions in B.C. that is still being represented by the CFS, the other being the College of the Rockies Student Union. As a result, the KSA will have the authority to easily appoint KPU students as B.C. representatives on the CFS national committees, giving the association a significant boost in national influence.

However, the KSA has not decided if that influence will be enough to end its members’ hopes of defederating.

“We are trying to weigh our options to see what’s best for students here,” says KSA President Caitlin McCutchen. “We haven’t decided what we’re going to do yet.”