Giants Fall to Royals in First Round 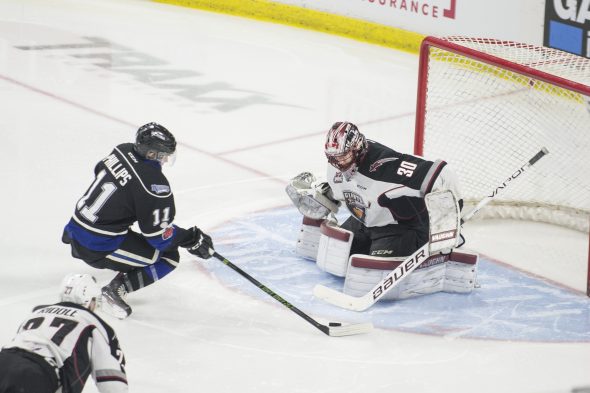 Victoria Royals centre Matthew Phillips attempts a deke on Vancouver Giants goaltender David Tendeck in game 3 of the first round of the 2018 WHL playoffs. (Joseph Keller)

The Vancouver Giants’ first playoff run in four years came to a heartbreaking early end in round one against the Victoria Royals.

The series was as close as they come, with both teams’ goal totals tied at 25 at the end of seven hard fought games.

“We played well. We could easily be on the other side of this,” says Giants coach Jason McKee. “This was really hard, especially for staff and players, because sometimes when you’re a little outgunned and the better team wins you can understand it. But this time we played extremely well and I think that’s what makes it so hard for everyone.”

The Giants and Royals met 10 times in the regular season before their playoff matchup and the history between the two teams manifested as mutual animosity. Post-whistle scrums occured from the getgo more often than not and continued throughout the seven games.

The series opened with a pair of close contests in Victoria, with the series heading back to Vancouver tied one-one.

Game three saw Vancouver’s most dominant performance. McKee credits a timely 2-0 power play goal by Tyler Benson, handing the momentum to the Giants at the end of the second period. The team would not lose that momentum all night as they scored three more in the third for a decisive 5-1 victory.

The Royals would return the favor in game four, however, as the Giants found themselves out of sync in a 7-3 defeat.

“We weren’t skating that night. We were watching the game and hoping for something good to happen instead of skating and making something good happen,” says McKee. “There are no do-overs, but if there were, that would be one we’d like to have back for sure.”

Game six was perhaps the most nail-bitingly tense game of the series. After losing an early lead in the second and going down by two early in the third, a pair of third period goals by Ty Ronning and Tyler Benson took the game to the only overtime of the series before Victoria’s Noah Gregor sent the matchup back to Victoria for game seven.

It was Victoria who carried the momentum for most of game seven. They took the lead with a powerplay goal late in the first and scored three more in the second period. Going into the third period, down four to one, the Giants didn’t let up. They dominated play in the third, scoring a pair of goals by Matt Barberis and Brennan Riddle, but despite a strong push in the last five minutes, the Giants couldn’t beat Victoria goalie Griffen Outhouse.

A razor sharp performance by Outhouse throughout the seven games was a big part of Victoria’s edge over Vancouver. As was the play of Victoria Centre Matt Phillips who had six goals and 10 assists in the series. McKee says that keeping Phillips in check was a key focus for Vancouver’s defence, but Phillips was “elusive” and Vancouver’s young defence just never got a handle on him.

Despite a disappointing first-round exit, the 2017-18 season can only be looked at as a success for a team that finished near the bottom of the standings in their previous campaign. This had a lot to do with the Giants’ younger core coming into its own, but the leadership of veterans like Ronning and Benson was also essential. Their presence will be missed next year, as Ronning is set to join New York Rangers affiliate Hartford Wolf Pack this week and Benson is expected to play on the Edmonton Oilers next season.

“You learn from the people that were there before you and these young guys will learn from the older guys,” says McKee. “I think both those guys have done a good job of doing that this year with their on-ice and off-ice. They’ve been tremendous for the Giants organization for a number of years and to cap it off with the season they had was great.”

Still, McKee says he’s optimistic that they will have a more-experienced d-core next season, and is excited that goaltender David Tendeck is coming off of a phenomenal rookie season.

“The thing we have to guard against is that, just because you’re a year older doesn’t automatically make you a year better,” says McKee. “As long as our group stays hungry we’ll be just fine.”