BC Parks Looks to Hire 48 Students as Park Rangers 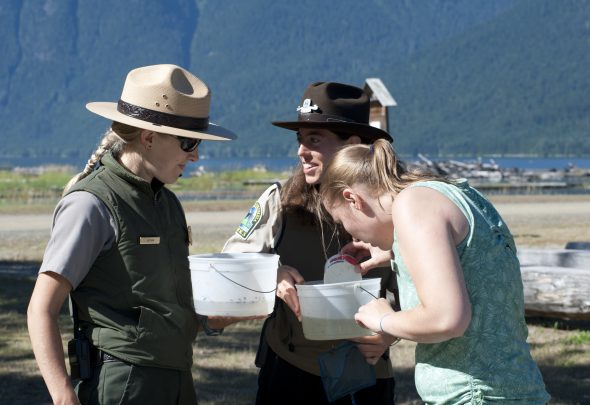 BC Parks is looking to students to find the next generation of park rangers in the province.

Applications are currently open for the province’s first student ranger program, which will see 48 students from across the province work in eight teams operating out of Prince George, Smithers, Kamloops, Victoria, Black Creek, Manning Park, North Vancouver, and Squamish. Crew leaders will begin work on May 22 while their crews will start on June 4.

“[The student ranger program] will promote the ministry as an employer of choice for future career planning, so we certainly hope to get people interested in coming into BC Parks as a career through this avenue,” says BC Parks Regional Director Larry Boudreau.

Boudreau says that, through the student ranger program, BC Parks aims to promote “outdoor youth employment opportunities across the province of B.C.” while giving students interested in careers in conservation, recreation, public outreach, and Indigenous relations a taste of what BC Parks offers as an employer. It will also “provide student workers with an opportunity to foster their interest in caring for B.C.’s natural spaces,” according to Boudreau.

Ranger crews will be involved in a variety of projects from across the province. They will be working together and with other BC Parks staff and external organizations to perform conservation, recreation, and outreach-related projects. Student rangers will be working in crews of six with one student designated as the crew leader. The job will occasionally see student rangers partaking in overnight camping trips in distant and remote parts of their regions.

BC Parks is looking for people who are enrolled in full-time studies for the current academic year and plan to be enrolled full-time for the next academic year. Applicants must be Canadian citizens between the age of 18 and 30 who can commit to work from mid-May to August. While not explicitly stated by BC Parks, Boudreau says that applicants who have a background and love of the outdoors will have an advantage.

If BC Parks meets its hiring target, 30 per cent of the 48 student rangers will be from Indigenous backgrounds. Boudreau says that this is partially because much of the work will take place on culturally significant sites and traditional territories of B.C. First Nations.

According to Boudreau, there is a high demand for park rangers in British Columbia, and he doesn’t expect that demand to decrease any time soon. In recent years, the province has annually rolled out around 85 to 90 seasonal park rangers across the province. Additionally, BC Parks has hired 25 new full time park rangers in the past year.

“I always say that it’s one of the best jobs in the world that I know about,” says Boudreau.