If Richard Hossein did indeed defraud students, KPIRG can’t let him get away with it 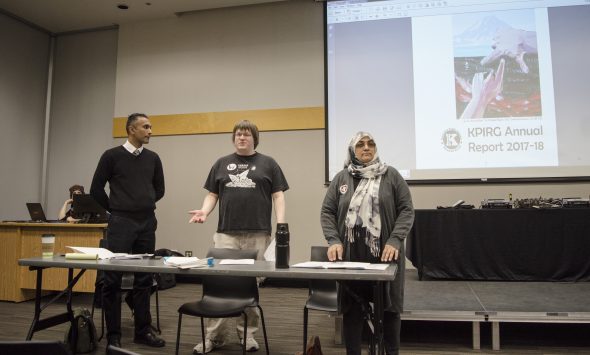 So it’s happened again. For the second time in Kwantlen Polytechnic University’s short history, a trusted student representative has been caught—allegedly—stuffing his pockets with tens of thousands of dollars that were entrusted to him by his fellow students.

This time it was—allegedly—Richard Hossein, founder of Kwantlen Public Interest Research Group who—allegedly—stole over $110,000 in student-provided funds from the organisation that he helped create.

Last month at KPIRG’s annual general meeting, director Simon Massey indicated to concerned students that KPIRG is willing to fight the good fight, but only to the extent that the organization could get back more money than it would spend in legal fees.

“We don’t have a plan to just run wild and spend all of our students’ money chasing, potentially, less money than we spend doing it,” Massey said at the meeting. “But since this is early on in the claim process, it’s going to be through careful consultation with our legal counsel.”

In other words, if going to court will cost KPIRG more than it can get back in a settlement, as it most likely will, then it will not pursue its former administrative coordinator for this betrayal of trust. This would be a deeply upsetting—and familiar—outcome.

In 2005, members of the Kwantlen Student Association’s board were exposed for pocketing over $2 million in student fees. Those disgraced councilors were removed in 2006 and a court battle between the KSA and its former board members ensued in the years following, until the KSA abruptly dropped the case in 2011. Shortly after, The Runner revealed that the 2011 class of councilors who voted to drop the case had previously undisclosed ties to the 2005 councilors whom they had let off the hook. What followed was yet another lengthy legal battle that ended in an undisclosed settlement by KSA councilors that seemed to just want to put the ugly matter behind them.

It was a weak resolution that The Runner’s editorial board at the time referred to as a “travesty.” In hindsight, it certainly is a travesty that no one faced serious consequences for stealing from the students who they were supposed to serve. It sent a message to any would-be con artists that KPU student funds can be abused with little to no consequence as long as the amount stolen doesn’t outweigh the cost of a court battle.

Assuming that the allegations against Hossein are true, if KPIRG allows him to walk away with over $110,000 that belonged to students, it will further cement that message.

The shadow of the KSA scandals still hangs over this institution. Seven years of honest representation from new KSA leaders has not been enough to change that. It’s brought up in comment sections nearly every time KPU finds itself in the media and it tells students and prospective students that their money will not be used in good faith. It can be hard to take pride in being part of a community where people in trust take advantage of students and, when caught, are not held to account.

KPIRG may now have the opportunity to finally hold one of those people to account and hopefully deter others from seeing KPU students as an easy source of personal enrichment in the future.

It’s understandable that KPIRG is hesitant to spend even more student funds after so much has already been mismanaged. Lawyers and court fees certainly are not cheap, and it’s not fair that the group’s current staff is left to deal with this mess.

Ultimately, however, the public interest would be best served by KPIRG fighting this fight, even if the victory comes at a financial loss. I would rather see $150,000 spent to prove that our money is off limits to scummy opportunists masquerading as student leaders than see $110,000 of our money finding its way into the retirement fund one of those opportunists.