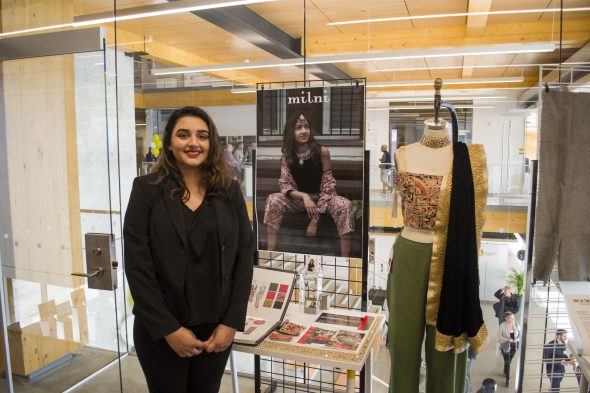 re:vision in part put together by KPU design students along with the dean’s office and an outside event planner. The event was designed to tie together the different types of design on display while still showcasing a variety of disciplines taught at the school.

“We wanted something to represent the depth of design as a whole because we’re in the graphic design program but, obviously, we’ve got fashion design and interior design and tech apparel and all sorts of other facets of design,” says KPU graphic design graduate Ethan Sztuhar.

re:vision was held over four days during the third week of April. The grand opening was on Monday while Wednesday was an industry open house, Thursday was a fashion design show, and Friday was reserved for friends and family members of the students as well as the general public. Exhibitions were set up for each of the design programs. Some students used the best examples of their later work from their programs while others took earlier examples and revamped them to show the progress they have made.

Graphic design graduate Natalie Fitzpatrick says that putting the event together was a long and hard process. Each cohort worked on designing their own exhibits, and the trick to making it go well, according to her, was identifying and working with each individual’s talents.

“I feel like it was a nice balance, having people who were talented both in event-based exhibits and designing an experience for everyone who’s coming together for this show,” says Fitzpatrick . 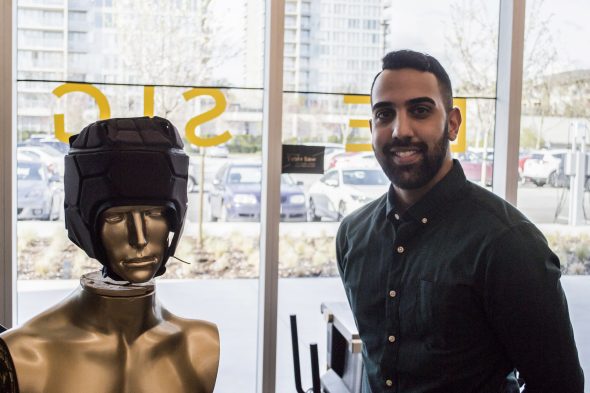 The Wednesday exhibition proved to be a tremendous opportunity for the graduates. The Wilson School of Design invited representatives from Vancouver’s design industry to see what KPU design students have to offer. Instructor David Young says that the idea with this was to provide graduates with an incredible networking opportunity.

“We’re primarily trying to show [industry figures] employability,” says Young. “We’re hoping that, not only will they experience work that our students have done by looking at it, but [also that] our graduating students will connect with them and talk with them and at least create an opportunity for more potential connection and hopefully find a job.”

Since the event took place in the school’s newest building, it also functioned as a soft launch for the Wilson School of Design’s new brand. KPU Fashion Marketing instructor Jimmy Choi says that re:vision marks the beginning of more interdisciplinary programming being offered by the design school.

“It seems like a lot of people think the Wilson School of Design is a fashion school and, in fact, all these programs are here,” says Choi. “We wanted to show that this is a design school that has all these programs and our goal is to have more interdisciplinary programming. [The grad show] is one of those stepping stones for our future as a school of design.”