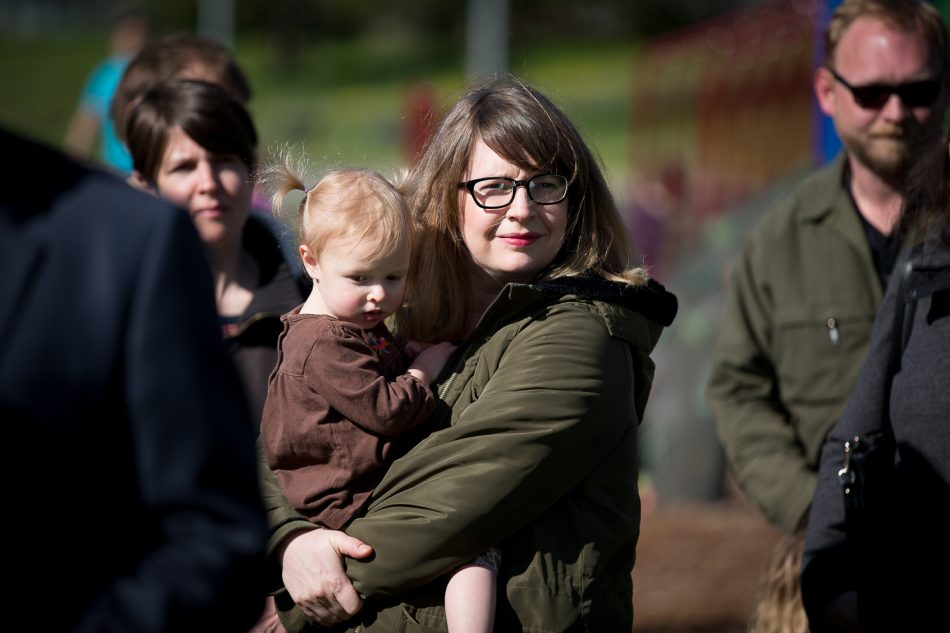 Parents brought their children to attend an address that Premier John Horgan gave in Vancouver 2017. Horgan spoke about the party’s commitment to childcare. (flickr/BC NDP)

Four months before the birth of their first child, Julia Smith and her husband registered their names on wait lists for licensed child-care programs. Last November, after 16 months of waiting, the only change in their situation was their daughter’s age and the fast-approaching end of Smith’s maternity leave.

“I’m on 14 wait lists and I haven’t heard a positive response from any of them,” Smith said in an interview late last year. “I’ve looked for daycare places everywhere between Simon Fraser University and downtown, so most of Burnaby and most of Vancouver. That’s two cities and still we can’t find anything. It’s just mind-boggling.”

The search for licensed child care in British Columbia has become increasingly difficult for families as they look for a safe program for their children. The wait lists for these programs have become so long that often the only remedy offered is for women to sign up as soon as they know they’re pregnant.

The Cost of Child Care

According to the Canadian Centre for Policy Alternatives, the median cost for licensed child care is more than $1,300 per month in Vancouver. In addition, a report entitled High Stakes by West Coast Leaf found that “the inadequacy of the [B.C.] child-care system has impacted [parents] and their children—undermining their safety, well-being, and human rights.”

Without a safe and affordable option being made available to working families, one parent is often forced to sacrifice their career path, potentially inflicting financial stress upon the household.

According to Smith, the pressure of simply waiting for a response is enough to drive parents mad.

“It’s so frustrating,” she says. “I’m going back to work. My husband works full time. We need child care.”

Unfortunately, Smith’s frustrations are shared by parents all over the province who are dealing with the same problem.

“We put her on, gosh, I don’t even know how many lists—maybe five or six,” says Kate Spence, a mother of two. “Others were full and didn’t even have space on their waitlist really [and] said not to bother.”

Without access to licensed child-care facilities, parents must either spend a considerable amount of money on babysitters or take a risk leaving their children in unlicensed facilities, which can often be unsafe.

In B.C. any child-care program that provides care for three or more children must be licensed, and their employees must submit to criminal record checks. However, in a 2013 article published in the Canadian Medical Association Journal, Adam Miller says that workers in unlicensed child-care programs don’t need to get criminal record checks, and that even the facilities themselves can be unsafe for young children.

Spence now relies on an expensive nanny to take care of her children while she’s working because she fears the potential dangers of unlicensed programs. This approach, she says, is breaking the bank.

“When we have her for two and a half days a week, it is costing us almost $1,700 a month, which is more than my paycheck,” she explains. “We had to ask my parents for help because it’s just way too expensive. We’re two working professionals—I’m a teacher and my partner runs her own business in finance—so it’s really ridiculous that we have to ask our parents for help. We’re almost 40.”

While she and her family are “trying to save every penny” to afford a new place to live, she says that spending thousands of dollars on child care every month makes it “impossible to save.”

Could $10 per Day Take These Worries Away?

Sharon Gregson, a prominent advocate for the $10-per-day child-care system, says that “families are desperate and making do with a patchwork of solutions” when they shouldn’t be.

Gregson believes that the government needs to take the initiative in creating a more effective child-care system in British Columbia, and suggests that the $10-a-day child-care plan backed by the B.C. NDP is the solution.

“Investing in lowering parents’ fees and capping parents’ fees, creating more licensed daycares, and improving the wages and education opportunities for early child-care educators—that is the solution,” she says. “It’s not rocket science. It’s right there in front of us and now we just need politicians to make the initial investment to get that system built.”

Gregson believes that the changes the NDP have made and plan on making over the next three years are the right steps to achieving a better system, and she’s not alone in this belief. Both Spence and Smith have fundraised and volunteered in support of the $10-a-day plan.

“I’m a public-school teacher and I don’t rely on parents to pay my salary, so I don’t know why, in the early years, we’re expecting parents to foot the bill,” Spence says. “I think that having educators that are well-educated and well-compensated—not by parents. but by the government—would be a huge thing. Then I think there would actually be incentive for people to work in early childhood education.”

For Connie Vicars, the owner and manager of Strawberry Patch Children’s Centre in Langley, the biggest problem contributing to the lack of space in licensed child-care programs is staffing. Like Gregson and Spence, Vicars believes that the government needs to get involved, but she’s concerned that the NDP won’t prioritize doing so with their $10-a-day plan.

“They need to spend money on the facilities they already have before they create 30,000 new spaces,” she says. “You can’t make all this new space and spend all these millions of dollars doing that when there’s no staff to put in it. Help the ones that are closing because they can’t afford to have staff.”

Gregson argues that people like Vicars are “not very familiar with the plan because [it does] includes more incentives for early childhood educators to go into post-secondary for their [Early Childhood Educator training] and it also includes workforce recruitment and retention strategy and a strategy to attract more ECE back into the workforce who have left for other fields.”

Many financial experts have found that the plan could potentially be economically beneficial. According to a Conference Board of Canada report, “every dollar spent on expanding Early Childhood Education results in $6 of economic benefit.” One analysis by Robert Fairholm and Lynell Anderson claimed that it would boost government revenue by $1.3 billion. The analysis also concluded that there would be approximately 39,200 more working mothers and a 1.7 per cent increase in B.C.’s overall employment rate if the plan were implemented. This, according to the report, could result in a net profit of $3.9 billion, or 1.6 per cent of the provincial GDP.

When the NDP-Green coalition began, both parties agreed to create a universal child-care program, but they took different approaches to meeting that end. The NDP campaigned on the $10-a-day plan authored by the Coalition of Child Care Advocates and the Early Childhood Educators of BC, while the Greens wanted to expand preschool to include three and four year-olds and provide more financial support for stay-at-home parents.

In February, the NDP and Greens unveiled their compromise with the BC 2018 Provincial Budget, which included all the proposed changes to the provincial child-care system. The plan costs $1 billion and the main changes to the current system are new benefits of “up to $1,250 per month per child” for families and “up to $350 per month directly to licensed child care providers to reduce fees.”

According to a Global News article covering the plan, $630 million goes towards these two changes, and that they will “replace the existing child care subsidy offered under the BC Liberals.” The $350 reduction in fees have been in effect since April, while the new child-care benefit will be implemented in September.

The government will spend a little over $1 billion over the next four years to implement all the changes. In addition, the province will receive $153 million from Ottawa because of the new Early Learning and Child Care agreement.

Although this plan is not a universal child-care system, the provincial government does believe that the changes “will set the province on the path” to eventually achieving a universal system.

Relocating or Waiting for Change

Despite the coming improvements, parents of young children are still struggling in the province’s current system.

Spence says that she and her partner were excited to pay for extra-curricular activities like swimming lessons for their kids, but may not be able to because they spend so heavily on child care.

“It just kind of restricts what you thought your kid’s childhood would look like,” she says.

Spence now has her oldest daughter enrolled in a preschool program, but it only runs four hours a week and does not give her the flexibility to continue working full-time.

For other families, the issues with B.C.’s child-care system are a cause to relocate. Smith says that she knows some families who “are going to leave the city because they can’t find child care, [and] when they do find it, it’s so expensive.”

Smith was lucky enough to get her child accepted at the beginning of this year into a licensed program, and with the newly-introduced fee reduction program, she says her family’s situation has changed drastically.