Happiness levels are lowest in the most dense areas of Canada, study finds 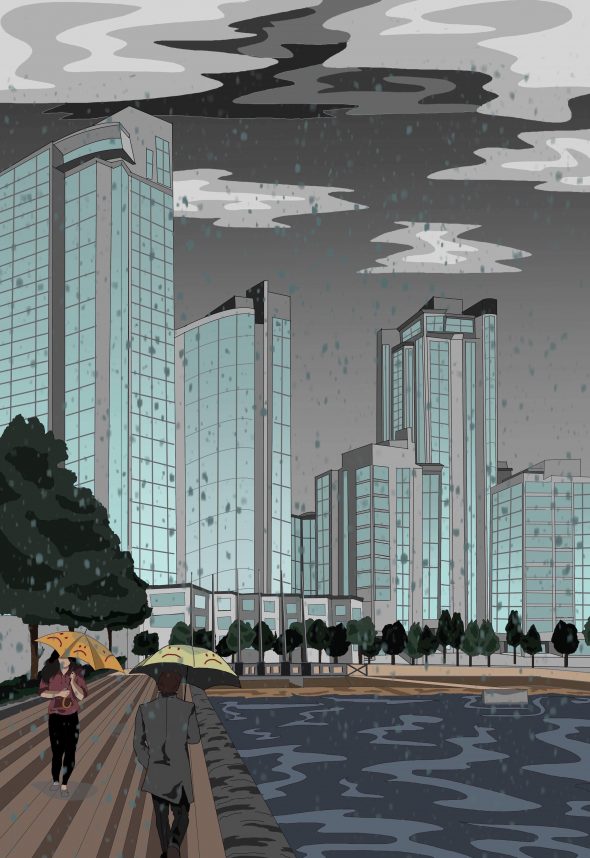 Vancouver is consistently ranked one of the most livable cities in the world. With its mild climate, breathtaking scenery, and quality of education and healthcare, it’s not hard to understand why.

Yet recent research has found that we’re also one of the most miserable cities in Canada.

A Study entitled How Happy Are Your Neighbours? by experts from UBC and McGill sheds light on the varying happiness levels across Canadian communities. According to the study, people who live in large cities are generally less happy than those who live in rural communities. Those in Vancouver and Toronto, two of the nation’s biggest cities, are the unhappiest of all.

The study found that people in big cities are generally unhappier due to the pressures of living with pricy housing markets, longer commutes, higher population densities, and a perceived lack of community. While researchers can not definitively say that the these factors are the direct causes of unhappiness in Vancouver and Toronto, their preliminary data does seem to point to that.

How Happy Are Your Neighbours?

The study utilizes data from Statistics Canada, primarily collected between 2009 and 2013, to analyze life satisfaction levels among 1,215 different geographic communities across Canada. StatsCan found that Toronto and Vancouver were nearly tied for the bottom spot out of 33 Census Metropolitan Areas for life satisfaction, with a score of 7.81 and 7.8 respectively.

How Happy Are Your Neighbours? is based on information gathered from about 400,000 repondants, 30,000 of which were in Vancouver. These statistics determined Greater Vancouver’s poor rating, though the areas within cities can have fluctuating happiness levels. For example, White Rock is one of the happiest regions of Greater Vancouver, whereas Whalley is one of the unhappiest.

Hugh Shiplett, PhD student at UBC’s Vancouver School of Economics and co-author of the study, says that, “as cities get larger, they get less happy.”

He hopes that the study will help Canadians consider how happy they are in their city, and would like to see lawmakers use the data to fuel happiness-related policies that are beneficial to the population.

While the exact reason behind it is unclear, the study did find that Canadians living in smaller communities lead comparatively happy lives.

“We found life to indeed be less happy in the cities,” reads the study. “This was despite higher incomes, lower unemployment rates, and higher education in the urban areas.”

“Urban areas,” in this case, are defined as having a population count of 50,000 or greater in the city core. The Greater Toronto Area has approximately 6.5 million inhabitants, and Greater Vancouver has a population of about 2.5 million.

For Isabelle Duchaine, a young professional living in downtown Toronto, these results aren’t surprising. She says that the high cost of living in Toronto and Vancouver provokes “anxiety and uncertainty” for people living there.

She adds that “the sheer mass of humanity” in these cities can be very overwhelming, especially for newcomers. Duchaine has lived in the medium-sized cities of Kingston and Ottawa and the small town of Brighton, and says that her experience with each was quite different from her time in Toronto.

KPU psychology instructor Jocelyn Lymburner says that many people living in Vancouver become trapped in a negative cycle due to unaffordability in the city.

“[If you] can’t afford a house and therefore you have to live in Abbotsford, then you’re spending an extra three hours in the car,” she says. “You’re not seeing your family members, and you don’t have any time to do the things you like to be doing.”

The happiest communities in Canada have shorter commute times, lower population densities, and have members who spend 30 per cent or less of their income on housing, “all of which are features of rural rather than urban life,” according to the study.

The study also revealed that, in rural communities, residents benefit from stronger social ties, less competition for resources, and more opportunities to own a home.

According to a Daily Hive article, Vancouver is Canada’s best city for commuting on public transit. However, it’s also the worst city to drive in due to reported congestion levels, fuel and parking costs, road accidents and fatalities, and the frequency of road rage.

“People in Toronto spend an average of 96 minutes in journey time and spend 47 hours in congestion,” reads the article. In Vancouver, those figures change to “an average time of 77 minutes spent travelling to and from work … and an average [of] 29 hours spent in congestion.”

Surrey-based entrepreneur Koralee Pearson has lived in Greater Vancouver for 30 years and describes her experience here as “fine.” While she and her family appreciate being able to take advantage of all of the opportunities a large city offers, the congestion in the city has long been a concern of theirs. The Pearson family owns three vehicles, as each of the four members have individual schedules and commutes.

“It’s hard,” says Pearson, regarding her commute to and from Richmond during evening rush hour. “If anything happens on the Alex Fraser or any of those tributaries—you’re done.”

The Impact of the Rental Market

According to an article in The Huffington Post published in May, the average monthly rent for one bedroom and two-bedroom apartments in Vancouver is $2,000 and $3,150 respectively, making it the most expensive Canadian city to rent them in. Toronto came second overall with one and two-bedrooms renting for $1,970 and $2,500.

The housing woes don’t stop there. The Canadian Real Estate Association reported that the average cost of a home in Greater Vancouver in May 2018 was $1,094,000, whereas Greater Toronto’s price tag came out at $772,400 for the same period. According to Douglas Todd, writing for The Vancouver Sun, paying for housing in Metro Vancouver consumes 85 per cent of a typical household income.

“That compares to 78 per cent in Toronto, 22 per cent in average Canadian urban centres and six per cent in the hinterlands,” he wrote.

Immigrants in the City

The share of the population that identifies as foreign-born is 22 per cent in urban areas and only six per cent in rural communities, according to the study. In Vancouver, that number jumps to 45 per cent.

“Immigrants often choose to move to cities, and generally the largest and least happy of cities,” the study reports. This can sometimes lead people who were born in those cities, and find themselves struggling, to view themselves as in competition for resources, fueling anti-immigration sentiment.

However, Shiplett asserts that, “in general, immigrants to Canada—regardless of where they come from—do achieve near the level of happiness of a native-born in Canada.”

He adds that it’s “highly plausible” that immigrants may score lower on the happiness scale because they’re newcomers to the area and lack the community ties and relationships of long-time locals.

Lacking a Sense of Community

For the researchers, the main takeaway from the study is that happiness is strongly intertwined with a personal sense of belonging and community.

Lymburner says that people need friends they can rely on, talk to, and spend time with in order to be happy, but that forming these social bonds is more difficult in a large city.

“Loneliness is a massive predictor of depression and anxiety,” she adds.

Young people often move to the big city to attend university or pursue a new career, but in doing so, they leave behind family, friends, and other established social connections. According to Duchaine, many people struggle to make new friends during this isolating process.

“People don’t really stop to smell the roses or chit chat,” she says. “You don’t know your neighbours very well.”

One contributing factor that Pearson suspects also affects happiness is the focus on social media rather than face-to-face interaction.

“When you’re on the SkyTrain or wherever, and you look around, everybody’s down on their phones. That becomes ritual over time,” she explains. “Nobody’s friendly anymore.”

Hope on the Horizon

Despite the results of the study, there is hope for people seeking happiness in Vancouver and Toronto. However, it’s largely up to them to attain it.

Lymburner recommends talking to employers about flexibility in work hours, taking a break from your smartphone, and making a conscious effort to reach out to others to foster a greater sense of fulfillment. Volunteering and doing charitable work can also be positive influencers.

Vancouver is frequently lauded for its beautiful landscape and proximity to the mountains and ocean. Being outside, embracing nature, and exploring one’s community are also suggestions made by Lymburner.

Pearson adds, “with community, conversations, friendships and trust … that’s part of our DNA. We need that to really blossom.”