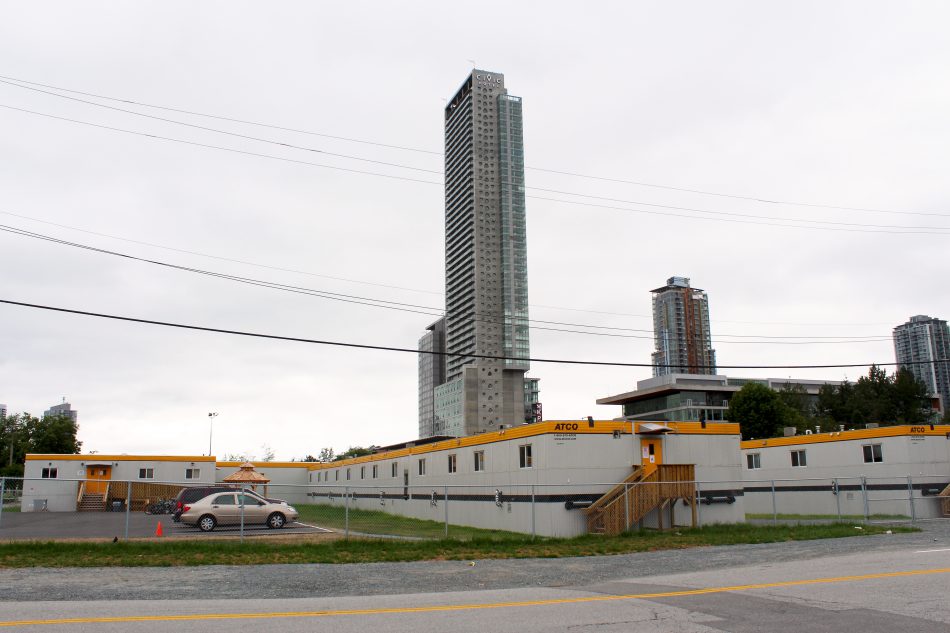 A joint effort by the City of Surrey, BC Housing, Fraser Health, and various non-profits has ensured that members of the homeless population living along Surrey’s 135a Street will now have a warm place to call home.

Between June 18 and 21, residents from the tent city along 135a Street and neighbouring shelters were moved into 160 temporary modular housing units. The sites are located along King George Boulevard, 105 Avenue, and 107a Avenue.

Jas Rehal, Surrey’s manager of public safety operations, says that this project was taken on after the city “identified a need for housing.” Work began a year ago, in response to the high number of homeless people living in tent cities in Surrey.

Dominic Flanagan, executive director of strategic initiatives at BC Housing, says that the project was completed with consideration of data from Metro Vancouver’s 2017 homeless count. According to that report, there were 602 homeless people in Surrey last year, and 203 of them were living without shelter. This year, Flanagan says that the number of unsheltered homeless people in the city has dropped to 173.

“What is seen in the City of Surrey is seen across Metro Vancouver,” he says. “There are some real significant challenges in Surrey but [they are] challenges that we see in a number of municipalities across the Metro Vancouver area.”

Poverty, a lack of affordable housing, mental illness, addiction, and psychological trauma are the typical causes for people becoming homeless, according to Flanagan. He adds that it’s important for housing models created by governmental institutions to identify and address these factors.

“Whether it’s the City of Surrey or Metro Van, I think it’s important to recognize there’s no single pathway into homelessness,” he says.

Each modular housing unit is approximately 109 square feet and includes a bed, table, fridge, microwave, and washroom. There is also a communal area for dining, where tenants receive two hot meals per day.

There are also no prerequisites for moving into the units. Each of the three sites has a minimum of two staff members on site 24/7. Their role is to provide support, ranging from counselling to helping tenants connect with outside medical and social services.

The 160 units are only temporary and will be in use for the next two years, until permanent housing units can be implemented. The City of Surrey and BC Housing are in talks regarding phase two of the project and are currently trying to decide where in Surrey to build the next group of units.

Flanagan adds that the new units will be larger and contain a small kitchen, washroom, and bedroom.

Both Flanagan and Rehal are pleased with the impact that the project has had on tenants and the surrounding community. Rehal explains that many of the residents who moved into the units are appreciative, though others are a bit more resistant to the sudden change.

Flanagan adds that the impact that the project has on the community is being closely monitored and that, so far, no tenants have relocated back onto 135a Street. He believes these results are “really encouraging” and hopes that the units will help those living there create a healthy and positive future for themselves.

“It’s really hard to make those positive changes in your life when you’re living in a tent or sleeping in a doorway,” he says. “So you want to encourage people and bring them inside.”