The Art of Loving Offers Sex Smarts to Vancouver

Vera Zyla, co-owner of the shop, outlines its titillating history 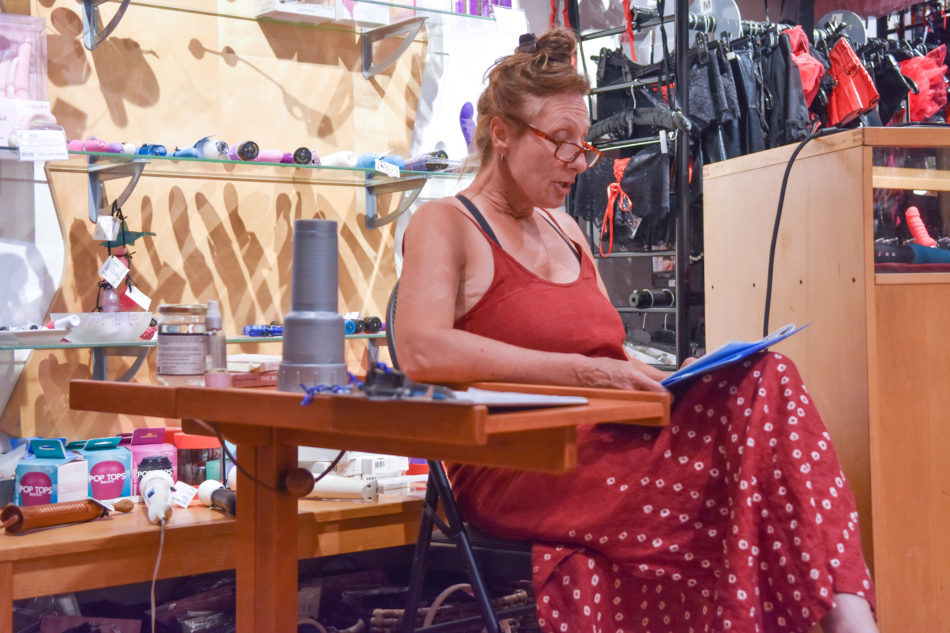 Zyla leading a seminar on “how to have a great orgasm” on July 26. (Aly Laube)

Sex positivity, the socio-philosophical movement towards accepting safe and consensual sexual expression, has waxed and waned in popularity throughout history.

A nearby product of this movement can be found in downtown Vancouver, at a small store called The Art of Loving. Run by business partners Vera Zyla and John Ins, the shop is compact but chock full of seemingly anything that the adventurous spirit might crave for the bedroom. Sex toys, books about sex, and lingerie line the walls from floor to ceiling.

Art of Loving might look like your run-of-the-mill sex shop, perhaps with more educational materials offered than you’d expect, if you go during the daytime. It isn’t until the sun goes down that it turns into a space that’s unlike any other in the city.

It is currently the only location in Vancouver that hosts educational sex seminars and live demonstrations. For a price, these events are open to anyone interested in understanding and claiming their sexuality or learning more about a sensual subject of their choosing.

According to Zyla, the shop “broadens and opens people’s minds and gives them more knowledge to empower themselves in their sex lives.”

“We’re an important part of the community because we offer a safe, sex-positive place to come to learn, to ask questions, to purchase items, to enhance your sex life,” she adds. “We’ve been here for 15 years so we have established connections with other people in the community and we’re a trusted place.” 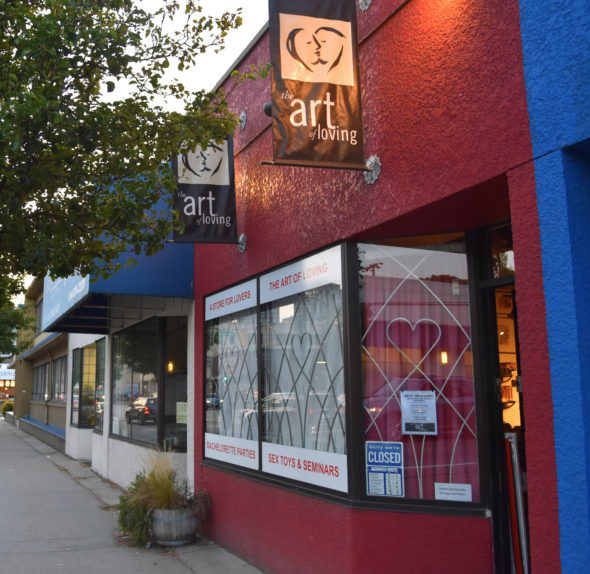 After moving from Kitsilano, The Art of Loving is now located near West Broadway and Yukon. (Aly Laube)

On July 26, The Art of Loving held a seminar on “how to have a great orgasm.” In the early evening, a small group of women sat down in a cleared area of the shop to watch Zyla discuss tips and tricks for self-pleasure.

After the seminar came to a close, Zyla says that one woman stayed behind to share her personal experiences.

“She had never had an orgasm before, had some abuse in her background, and this was her first foray into potentially having an orgasm … which has probably held her back all those years,” says Zyla. “Although she may never come back and say anything to me, I know that it has helped her in some way to be in a space that’s safe for her, with other women talking about their challenges.”

The Art of Loving holds seminars like this several times a month. In between are the more scandalous live demonstrations, during which a presenter and a model demonstrate a variety of subjects and acts.

The live demos being offered in August are on impact play, rope bondage basics, using a strap on, yoni massage, and “pleasing a woman with your hands.” Attendees don’t engage in the performances; instead, they’re asked to watch quietly and save their queries for the question period that comes after the demonstration.

“It’s edgy. It’s not for everybody, and that’s why we offer some seminars with live demos and some seminars with just video,” says Zyla. “Everybody’s at different places on their journey and have different comfort levels for what they’re willing to be a part of. I think offering those steps is great because it helps people move along.”

She believes that the live demos are uniquely beneficial because they allow people to “actually have dialogue with the presenter and the model afterwards” and allow community experts to share their knowledge in a productive way. Zyla encourages anyone interested in the demonstrations to pre-register online, show up on time, keep their cameras in their pockets, and “bring their questions and curiosity and open mind to learn.” 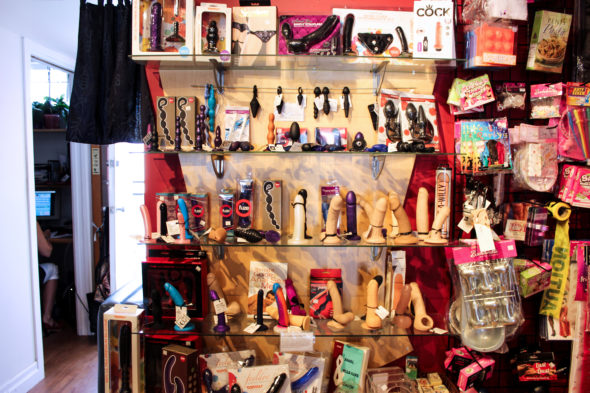 Some of the products available in the store are on display for customers. (Aly Laube)

The Art of Loving’s first location was in Kitsilano and, lost to demoviction, is now a Rolls Royce dealership. The move from one shop to another—at their current spot on West Broadway—was “extremely challenging,” according to Zyla.

They settled on the West Broadway location because the landlord there was the first to be supportive of their work. While it’s smaller than they would have liked, they have no plans to leave and have been there for about two and a half years.

Stigma against sex and pleasure has also prevented Zyla and Ins from opening stores in other parts of Canada, she explains. When they tried to start new locations in cities like Calgary and Winnipeg, they were met with the same resistance from hesitant landlords.

“People have prejudice related to sexuality, pleasure, enjoying pleasure, exercising your pleasure,” says Zyla. “Whether it’s because of their religious beliefs or upbringing or family origins, society’s pressures, I guess all of that comes from a variety of different places.”

In a similar vein, the City of Vancouver was obligated to send postcards notifying residents about the opening of The Art of Loving’s West Broadway location. In the postcard, they were told that a sex shop would be opening and that any questions or concerns should be directed to City Hall.

Conflict in Court and the Media

The first time that sexual acts were performed live at The Art of Loving, there were news trucks lined up down the street. An undercover cop was there, and the Vancouver Police Department said that it would shut down the store if they went forward with their first live demonstration.

The exhibition itself was a performance art piece by an Emily Carr instructor about the 69 sex position. The artist invited two models in to perform oral sex on each other and, with paint and a roller, made a print of their bodies in the midst of it. The piece was extremely controversial and, for reasons unknown to Ins and Zyla, believed by the police to be illegal.

After a long discussion, the duo decided to go forward with the exhibition anyways. With his background in law, Ins assured his business partner that the police didn’t have grounds to shut them down. They handed out consent waivers at the event to everyone who walked through the door and no arrests were made.

However, the VPD didn’t wait long to press charges against the Art of Loving for holding the event, though the Crown ultimately dismissed the case. Ins wrote a letter to the department requesting an apology but never received one. Later, an episode of The L Word was based on this story.

While the immediate backlash from this conflict “damaged the business in a way,” Zyla feels that, in the end, the ordeal was beneficial to The Art of Loving because it “set precedence” for their live demonstration sex seminars.

Unfortunately, the opposition to Zyla and Ins’s work was not limited to that one incident. They’ve also come into conflict with Canada Post for wanting to mail newsletters about their business to the local community and with the Film Classification Board of British Columbia for trying to distribute educational videos to their customers. In both instances Ins drew from his legal background to advocate for their right to distribute promotional or educational material and, while they are allowed to sell the videos, they ultimately lost the case against Canada Post.

Getting to Know Vera Zyla

Daughter to immigrants from Russia and the Ukraine, born and raised in Toronto, Vera Zyla has had a life full of exploration and entrepreneurialism.

At 18, she attended college to get her degree in chemistry, but unexpectedly fell in love with Vancouver and moved there after two years of school. Soon after, she bought a motorcycle and started working for Mountain Equipment Co-Op’s catalogue and production direction department. This, she says, was the most traditional job she ever had.

After leaving the co-op she lived in the Rockies, built a cabin, and worked as a guide for rafting tours down the Kicking Horse River. This occupied about five years of her life, and when she was ready to move on, she got her certification as a traditional Chinese medicine practitioner and worked at a clinic treating cancer patients.

Zyla worked in TCM for a decade before the opportunity to open The Art of Loving presented itself. After struggling to make both of her careers work simultaneously, she left the clinic and decided to devote her professional life to the store.

“I’ve often taken a role in helping visionaries with a plan because I’m the executor and the glue that keeps things together,” she says. “I love the challenge of making something happen. For me, that’s the juicy part.”

While running a business isn’t always glamorous, Zyla appreciates having the freedom to manage the shop however she feels is best—with consultation from Ins, of course.

Over the years, her own perspective on sexuality and pleasure has evolved drastically. Since the opening of the shop, she says that she has experienced “a big journey in terms of knowledge because there’s so much to learn.”

“I don’t think that you get to a static place and you can’t evolve any further. I still continually learn things,” she says. “When I reflect back to what sexuality was like for me in my 20s and 30s and 40s, the store really catapulted me into—if we’re thinking of sexuality in terms of walking up stairs, taking steps—it really made me jump up a few steps.”

“The part of me that just had some sort of discomfort with it melted away,” she adds. “When this is your daily environment, things become very normal.”