Beyond the Pages: A Look at Pulp Magazine’s Latest Issue

Thanks to an all-new editorial team, the issue shows off the talent in KPU’s arts and literary scenes 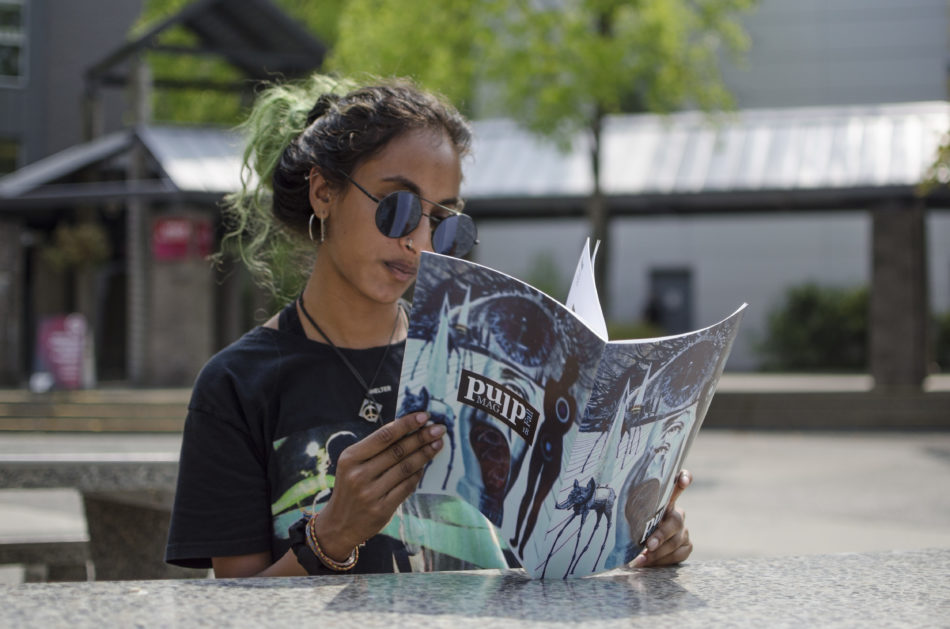 Pulp Magazine, the KPU student-run literature and arts publication, has offered readers a colourful and diverse showcase of poetry, prose, and visual artwork since its launch in 2012. The magazine’s latest issue—its 16th overall, published just in time for the fall semester—came together through the collaborative effort of a brand new team of editors from a variety of creative backgrounds.

Chelsea Franz, Pulp’s Managing Editor, says that putting the issue together was a learning experience for all five of its new editors. One of her goals for Pulp is to help create a tighter community for students at KPU by encouraging them to explore the literary and visual arts.

“It’s hard to be pursuing a career in arts because it takes a while for you to accept that that’s your role in society, to tell yourself ‘I am an artist, and that’s what I’m going to do,’” she says. “You need something to validate you, to tell you that you’re on the right path and that you’re doing something worthwhile. You have the talent. It’s not just something in your head.”

Mariah Negrillo-Soor, a third-year creative writing student at KPU whose poem “Zodiac Sign: Pisces” appears in the issue, says that submitting to Pulp has helped her become more confident as a writer. She also feels that it has helped connect her with other writers and artists at the university.

“I think a lot of writing—it gets better the more experiences you have, not just in your own life but with others, talking to people and getting to know their stories and listening to what they have to share,” she says. “I like the combination of the art and the different styles of work that [the editors] chose. I recognized a lot of people’s work and some names of people who I’ve worked with before.”

“Zodiac Sign: Pisces” was originally an assignment on open-form poems that Negrillo-Soor wrote for a class on poetic forms and techniques.

“All year we were writing more traditional forms of poetry that had very rigid structures, meter, and rhyme schemes,” she says. “It was fun to write, and a lot more fun to read aloud. A lot of the lines go unexpected places.”

According to Franz, Pulp is already looking into some new possibilities for the next issue, such as accepting video submissions and incorporating multimedia artforms into the magazine using the HP Reveal app.

In the long-term, Franz says that the team is also looking at increasing the number of times that Pulp will be published per year, potentially releasing multiple issues per semester and narrowing down the content in each issue to focus on specific themes or artforms.

“We’re working to get it up to its full potential,” she says. “There are so many things that Pulp can do to have a strong and beneficial impact for artists.”

Pulp will be hosting an official launch event for the new issue at 5:30 pm on Sept. 6 in the KPU Surrey Cedar Conference Room.