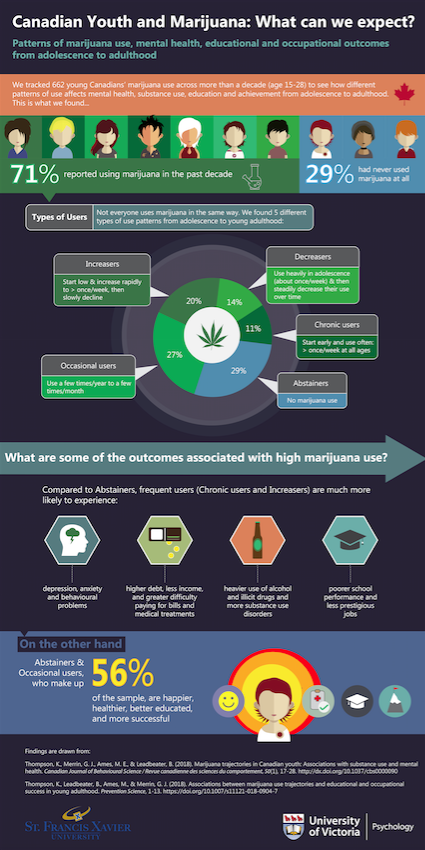 Researchers’ data helped them separate students into categories based on their levels of cannabis use. (Courtesy of Dr. B. Leadbeater)

The Canadian government is preparing to turn over a new leaf by legalizing marijuana, a substance which has been legally restricted since 1923.

Leading up to October, researchers are looking to clear some of the smoke surrounding the impact of long-term cannabis use, particularly among younger students. A report published in The Canadian Journal of Behavioural Science tracked the behaviour of cannabis users between the ages of 15 and 28 to determine the effects that cannabis use had on various aspects of their lives.

The article, “Marijuana Trajectories in Canadian Youth: Associations With Substance Use and Mental Health”, followed users for over a decade to track their patterns of use and how it affected their mental, academic, and socioeconomic wellbeing.

Dr. Bonnie Leadbeater, a psychology professor at the University of Victoria who contributed to the article, says that she hopes studies like this will continue to shed light on the long-term effects of cannabis use, especially once it becomes legal.

“What we hope can come out of this is that students will be better informed and supportive of their peers in decision-making around cannabis use, and that they’ll be more aware of the effects of cannabis,” she says.

The study divides students into five categories based on how frequently they use cannabis in any form. 27 per cent of users can be categorized as “occasional,” meaning that they use cannabis only a few times per month or per year. 20 per cent are considered “increasers,” which means they start with lower levels of consumption that increase to once per week or more and then steadily decrease. “Decreasers,” who typically use at least once a week when they are younger but use less as time goes by, constitute 14 per cent. 11 per cent are “chronic” users, who consume the most. Usually, they started using cannabis at least once per week or more in their youth. The final 29 per cent of those surveyed report never using cannabis and are categorized as “abstainers.”

“Heavier use is linked to lower academic performance, higher potential for mental health issues like depression and anxiety, and higher levels of consumption of alcohol or other drugs, and more frequent users tend to work in less prestigious professions later in life,” says Leadbeater.

Canadian youth are among the most frequent users of cannabis in the world, which Leadbeater says is one of the reasons that this kind of research is so important to students. She feels that dispelling some of the myths around cannabis use will help students make decisions that benefit them in the long term.

“It’s not a recreational activity in the sense that sports are, and when it is sold in stores it will be more like alcohol, which is considered retail and not recreational,” she says.