Twice per year, emerging and established designers from across Canada come together to present their best work at Vancouver Fashion Week. The seven-day event has welcomed talent from home and abroad since it was conceived in 2001, and has historically seen collections from Kwantlen Polytechnic University students and alumni.

Last year, KPU’s own Sam Stringer watched models wearing her designs on the VFW runway. Stringer’s looks returned to the catwalk this September, though having recently convocated, she attended as a graduate. The only current student to present an original collection this season was Wendy Schindler, who participated under her brand, Devotion Designs.

Schindler was scouted by a Vancouver Fashion Week representative who found her via Instagram. When she first heard this news, she says that she was “over the moon excited” to see her work presented as part of an esteemed show for the first time. 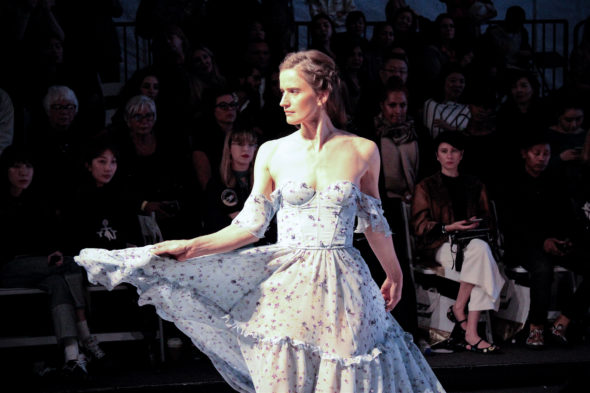 Schindler’s collection as Devotion Designs was based on both inspiring female confidence and adopting Claude Monet’s color palette. (Aly Laube)

She premiered a collection entitled “Devotions”, which was inspired by paintings from Claude Monet and themes of confidence and femininity, on Sept. 19.

“There was a study that came out that showed that a good majority of women feel a lot more confident when their bra and underwear are matching,” says Schindler. “I wanted to use that theme of feeling confident in your lingerie, when you’re feeling really beautiful, and tie it back in with Monet’s colours and textures.”

Schindler attended the Vancouver Art Gallery’s Monet exhibit and used the inspiration she found there to create a dress she designed as part of a fundraiser for mental health and addiction awareness and resources. The pieces she put forward at the fundraiser, called “Brilliant!”, marked the first time she incorporated elements of Monet’s work into her own.

Long before she joined KPU’s design program, Schindler was a high school student with a passion for textiles. The first time her designs were displayed publicly was for a small show held by her Grade 12 class, when she created a series of wedding and flower girl dresses.

“When I compare the two collections it amazes me, because I remember looking through one magazine to get inspiration for that [first] collection,” she says. “[For ‘Devotions’], I pulled every single book I have in my library, I went to the school library and had all these different books pulled out.”

What she feels sets her style apart from other designers who took part in Vancouver Fashion Week is “the time and energy that goes into every single one of [her] pieces.” For instance, thousands of hours of hand sewing and detailing went into the creation of the looks she presented at VFW.

“I put so much time and energy and love into each single piece and I love everything I do,” she says. “I really hope that shines through in my work and that people see that.”

To incorporate the survey about matching lingerie and women’s confidence into her collection, Schindler had most of her models wear pieces that included built-in bustiers. 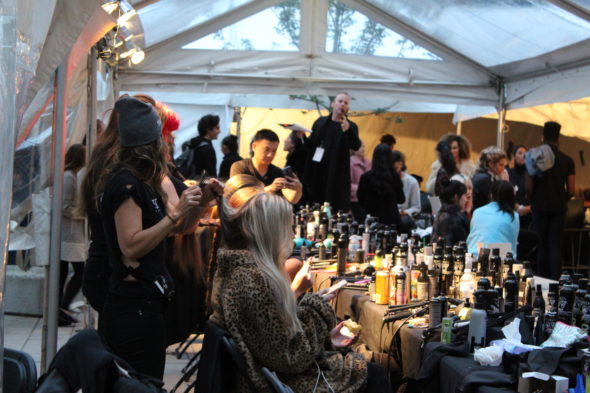 Backstage at Vancouver Fashion Week, models, designers, makeup artists, and more rush to get ready for the show. (Alyssa Laube)

“Doing my research and focusing on this confident woman in her matching lingerie, I looked to that morning-after-your-wedding-night kind of feel. You put on your silk robe, you’re in Paris with your husband, you’re feeling so beautiful about yourself. I looked into those—negligees and bustiers and that very soft, feminine type of feel,” she says.

Throughout her life as a designer, education has been crucial to Schindler. This impact began with her Grade 12 debut and now is primarily tied to her current relationship with instructors from the Wilson School of Design. Two of those faculty members in particular, Jessica Bayntun and Mary Androsiuk, have helped guide and support Schindler throughout her burgeoning career.

At the end of her VFW show, Bayntun came on stage for a tearful embrace with her student.

Schindler describes Androsiuk as “very versatile in how she teaches,” and thanks her for giving her creative freedom with many of her in-class assignments.

“She has always supported me and let me tailor my projects to more of what I want to do,” she says.

Lukas Daase, another local and emerging designer who graduated from Blanche Macdonald in 2016, was also new to Vancouver Fashion Week. They released their debut collection, “In Bloom”, on the same day as Schindler.

A sixteenth century allegorical painting by Bronzino named Venus, Cupid, Folly, and Time was Daase’s primary inspiration behind the collection. Each of its looks was inspired by a different character from the painting.

Daase’s own relation to gender identity—and its various traditional and progressive facets—is also part of their reason for the androgyny and hybridity of their collection.

“I was very influenced and inspired by my own journey with figuring out where I stand on the gender spectrum and just about my pronouns,” they say. “It was a bit of self-exploration as well, which I want to say is a very personal experience, and beyond that, my clothes are quite neutral.”

Earthy tones, loose-fitting garments, long coats, and sheer fabrics are some of the defining elements of Daase’s wearable but whimsical collection. More of their work will be available for viewing shortly at their website.

Fans of Devotion Designs or Lukas Daase can likely expect to see them again at the next run of Vancouver Fashion Week.