Crossing Canada as an Amateur Cyclist

The journey was harrowing, the experiences were enlightening, and the road was bumpy 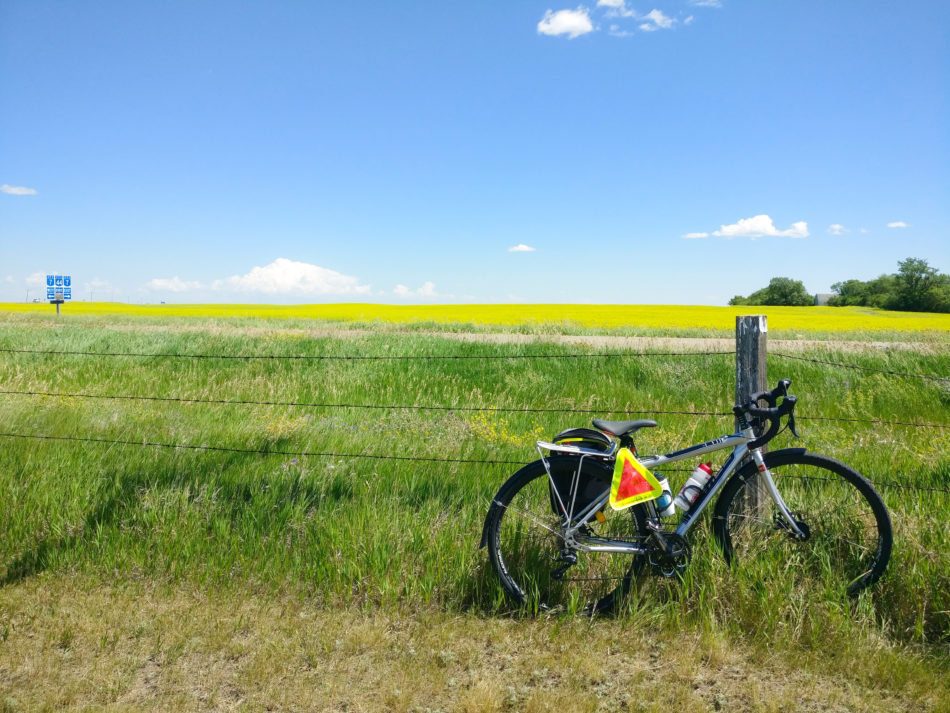 “My bicycle, nicknamed Silver Beauty in front of a lush canola field in Alberta.” (Kristine Hui)

As the second largest country in the world, the challenge of riding across Canada has beckoned cyclists from far and wide. Some see it as a challenge; they want to prove to themselves that they have what it takes to make it all the way across. Some make the voyage to fundraise for charities, while others cycle to explore this vast country.

My reason was that I wanted to see my home country. I wanted to feel the wind pushing against me and to be rained on. I wanted to see all the things people miss when they are zooming along the highway without giving the scenery around them any more than a passing glance. I started this ride because I thought it would be fun, and it was. Each day was its own special adventure.

B.C. and The Prairies

We began our cross-Canada trip 20-strong as an international group of riders from Canada, the United States, Germany, Switzerland, England, and Australia. Our first day’s ride was from Vancouver to Mission—83 km, well below the daily average distance of 130 km—which proved too much for the oldest rider in our group, a 69-year-old Ontarian who left the tour. By the end of the first day, we were down to 19 riders.

Even though I had trained for the trip beforehand, I was worried that I’d be the least physically fit in the group and, as such, would be left behind. My biggest fear was getting a flat tire, since I’d never had to fix one before. I was careful to never be last in the group so that, if I had any problems, someone would always be behind me to help. 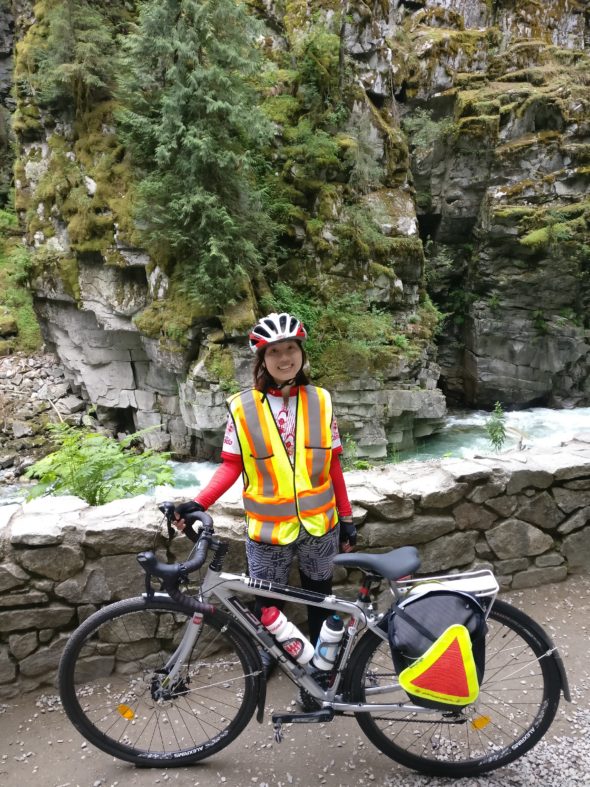 Posing near the Othello Tunnels in Coquihalla Canyon Provincial Park, Hope, BC. (Courtesy of Kristine Hui)

The most physically challenging day for me was the third, when we travelled the 111 km from Hope to Merritt. We went through the Coquihalla Pass, a mountain pass with an elevation of 1,244 m, which, according to ICBC, saw 32 fatal crashes from 2004 to 2013 with 400 to 500 crashes during winter months. It’s considered one of the deadliest highways in B.C. due to how steep it is to climb up and down the summit. The long journey up the mountain coupled with the intense summer heat was excruciating, and I had to stop every 10 minutes to take a break.

Though I managed to make it there, I arrived in danger of succumbing to heat exhaustion. Later, this happened to a fellow rider who was unable to finish one day in Alberta and collapsed five kilometres away from the campsite.

We had set up our tents in the pouring rain the night before, and in the morning all of our tenting gear was packed away wet. The weather continued to be cold and miserable that morning as we started our 171 km ride, one of the longest days of the trip.

One kilometre in, I got my first ever flat tire. The two cyclists I was with at the time were in front of me, and when I called out to them for help, they didn’t hear me. They didn’t look back and carried on without me.

My worst fear was realized. I was stuck beside the highway in the cold, with a flat tire, all by myself. I began the process of fixing my flat, which I—theoretically—knew how to do.

With the help of two other riders who later came along, I repaired it and carried on by myself. I became extremely paranoid that I would get another flat and stopped several times to make sure that my tires were still in good shape, then made it another 60 km before I got my second flat tire. About 10 km after patching that one up, my tire went flat for the third time that day.

Luckily, I was able to hitchhike to the bike shop in the nearest town, but by the time I left I knew that it would be dark before I would be able to make it to the campground. Having been invited to stay with a fellow biker in Airdrie, I went off-route and arrived at her house after more than 12 hours on the road.

The people who say that the Prairies are flat must have been driving, because on that day they certainly did not feel that way. I can honestly say that I have never been happier to climb into bed.

Although I experienced my share of difficulties on the trip, I’m happy to say that I didn’t get into any trip-ending accidents. The same cannot be said for all the cyclists in our group. Cycling into Regina, Saskatchewan, a rider in our group fainted on the highway, broke her collarbone, and returned home. We were down to eighteen riders until she returned four weeks later. She plans to make up for the time she lost in 2019.

Though we had many adventures across the first four provinces of Canada, I found the days recounted above to be my most memorable. More than being able to experience the country’s natural beauty, I got to experience the kindness of British Columbians, Albertans, Saskatchewanians, and Manitobans. They stopped to help fix my bike and to offer me water or a lift when I needed it. I learned that the stereotypical image of the nice Canadian is more than just a stereotype—Canadians really are the nicest.

Ontario, Quebec, and the Atlantic Provinces

Most cyclists in our group would agree that Ontario was the toughest province to travel through. The scenery, while nice, was not spectacular, and the long and humid days soon became monotonous. There were days when I would fall asleep on my bike while dreaming of other things.

To break up the monotony, I got a ride from a fellow traveller to Toronto, where I visited my old high school friend. It had been several years since I’d seen her, and as I took in the view from her classy apartment, I couldn’t help but feel a pang of jealousy.

Though we were the same age, she had a steady job and was living with her boyfriend in downtown Toronto, whereas I was still a student who lived at home with my mom. Where she was dressed elegantly in simple but expensive clothing, I wore damp, sweat-soaked clothes that had not dried properly during the night. 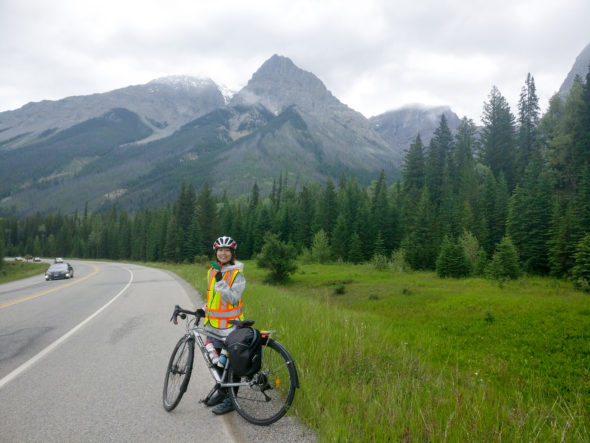 Posing with my trip mascot, Truman, the dinosaur, as we cycle through the Rockie Mountains. (Courtesy of Carolyn Elliot)

I told her a bit about my travels and the places I had visited in Ontario. I asked if she had been to Thunder Bay, Tottenham, or Kenora, but she shook her head at each name I offered. She said she rarely left the city and didn’t have a driver’s license or a car anyways.

I was a bit shocked that I had seen more of Ontario in the two weeks that I had been there than she had through five or six years living there. Although we ended up having a lovely time together, I left Toronto thinking that we were each travelling on very different paths now, and I wasn’t sure which one was better.

I’ve never felt more like a foreigner in my own home than the day I crossed the border into Quebec. Logically, I know that Canada is a bilingual country, but the only French I’ve heard in B.C. is the nervous kind that’s spoken under the watchful eye of a high school teacher. In Quebec, English was both a minority language and culture, and there I saw a part of Canada that I didn’t know existed.

Montreal and Quebec City had cathedrals all over, and the architecture and food there had a decidedly French air. Even as I entered New Brunswick, French seemed to be the dominant language.

Because we only spent one day in Prince Edward Island, I woke up at 5:00 am so I could spend as much time there as possible. I had romanticized the place based on what I had read in Anne of Green Gables and was determined to have a great time.

While there were many quaint seaside towns, everything in PEI just felt like it was made for tourists, with Anne’s face around every corner. She was on postcards, magnets, menus, and marquees as the titular star of two plays. She was also the reason gaggles of Japanese tourists came to the island every summer. I can’t imagine living on the island and having to see or hear about Anne of Green Gables every day. I was sick of her after only one.

The next day, we took the ferry to Nova Scotia where I learned that the province had strong ties to Scotland, since they had been some of the first settlers there. The Cabot Trail in Cape Breton Highlands National Park was one of the best parts of the trip. The ocean hugs the mountains tightly on the trail, and I was treated to spectacular views of both. While it was difficult climbing up three mountains in one day to get to this lookout, the view made it worthwhile. 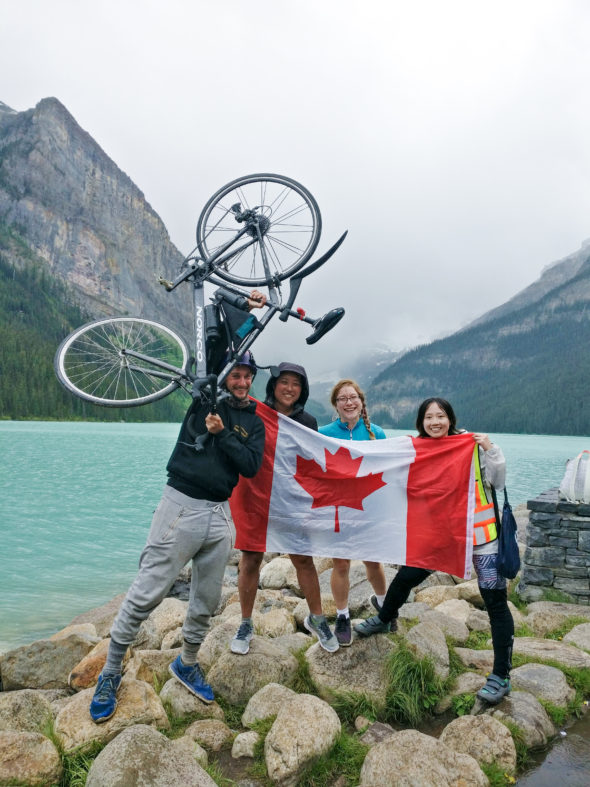 When we made it to Newfoundland, I was glad that the ride was nearing completion. As much of an adventure as it had been, I was ready to go home to the comfort of a personal fridge and a big bed. I wish I could say more about the natural beauty of the provinces, but after seeing breathtaking view after breathtaking view, and charming town after charming town, I started to become indifferent to it all.

On the final day, as I cycled up to our final destination, Signal Hill, it started to dawn on me that I had done it. For the rest of my life, I could say that I cycled across Canada, and it was a beautiful thing to discover that I could do what I once thought was impossible for me. More than the beauty of Canada, and even more than the people, what I will remember from this trip is the feeling of fearlessness that it gave me—the belief that I really can do anything.