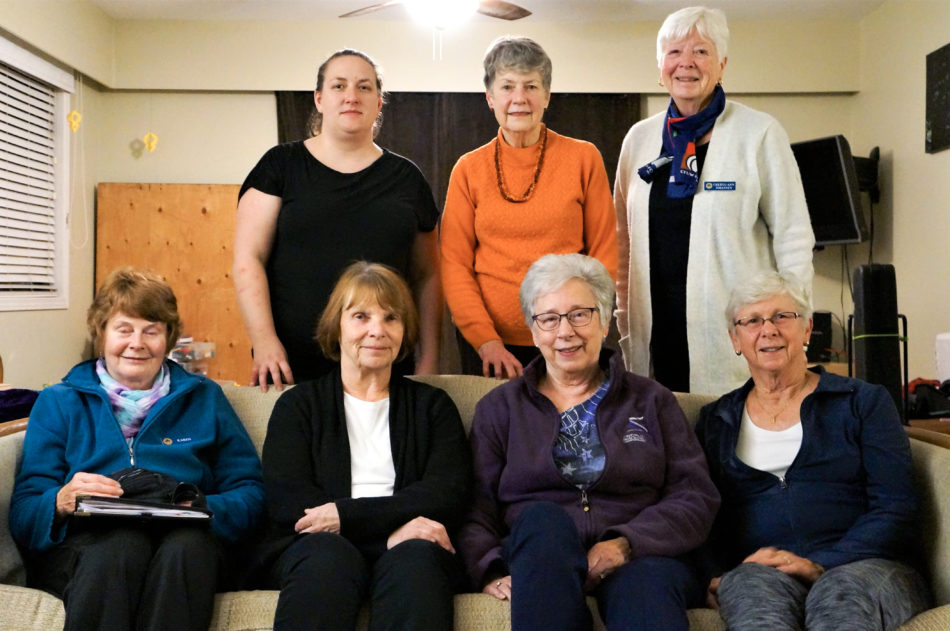 The Canadian Federation of University Women is a group of over 8,400 Canadians dedicated to improving the lives of women through the pursuit of higher education.

“CFUW is the largest affiliate of the International Federation of University Women (IFUW), the leading girls’ and women’s global organization run by and for women, advocating for women’s rights, equality, and empowerment through access to quality education and training up to the highest levels,” reads the biography on their Facebook page.

The latest meeting of their North Delta/Surrey chapter on Oct. 17 started with members getting settled in Kelsey Pekarek’s living room. Soft jazz filled the room while the group of friendly, soft-spoken women caught up with one another and talked about their budgets and bursaries.

The group spent most of the meeting deciding where to allocate their funds. In addition to regular donations from most of the members, the CFUW also holds fundraisers such as book sales and luncheons.

The 15-member North Delta/Surrey chapter of the organization, which established their charter in August of 1982, is among the CFUW’s smallest groups. Cheryl-Ann Johansen, the president of the chapter, proudly says that although the group may be small, it has a very high attendance rate of up to 90 per cent. Larger groups, such as the Vancouver chapter, can have up to 400 members, while Coquitlam has 39 members and West Vancouver has about 70.

The Canadian Federation of University Women was founded in 1919 in Winnipeg, Manitoba. Their national annual general meeting, as well as their 100th anniversary celebration, will take place there next year, with many projects and awards currently being planned for the event.

The CFUW is part of a larger network of university women which used to be referred to as The International Federation of University Women but now is known as Graduate Women International, based in Switzerland. Johansen had the pleasure of attending one of the international group’s annual general meetings in Manchester, England. These meetings are held every three years all around the globe.

“It was just amazing to see these women who were from India and Nigeria and very difficult countries to have doctorates and be qualified for this level,” she says. “To see these women have worked their way through and become amazing leaders in countries where that just doesn’t happen—it was pretty exciting.”

The CFUW’s North Delta/Surrey chapter attended the White Rock Surrey Club’s “Lunch ‘N Learn Speaker Series” out of support at the Guildford Golf & Country Club on Oct. 27. Members purchase tickets for $35, which goes towards the club’s fundraising efforts. At the event, speakers from Covenant House and Vancouver Crime Stoppers made presentations about ways to combat youth homelessness in the Lower Mainland.

Visit the CFUW website to see the list of fellowships and awards offered by the organization. In addition to the funding they provide for women in post-secondary education, they also offer many bursaries for high school students and charity for local women in need. They are also always looking for new members.

You do not need a post-secondary degree to join the CFUW. Membership is open to all like-minded, female-identifying individuals. In addition to the funding they provide for women in post secondary education, the North Delta/Surrey Club also offers many bursaries for high school students and charity for local women in need.