Drawing Inspiration from Dungeons & Dragons Can Improve Your Creativity

Basing tabletop games off of short stories can improve your adventures, and vice versa 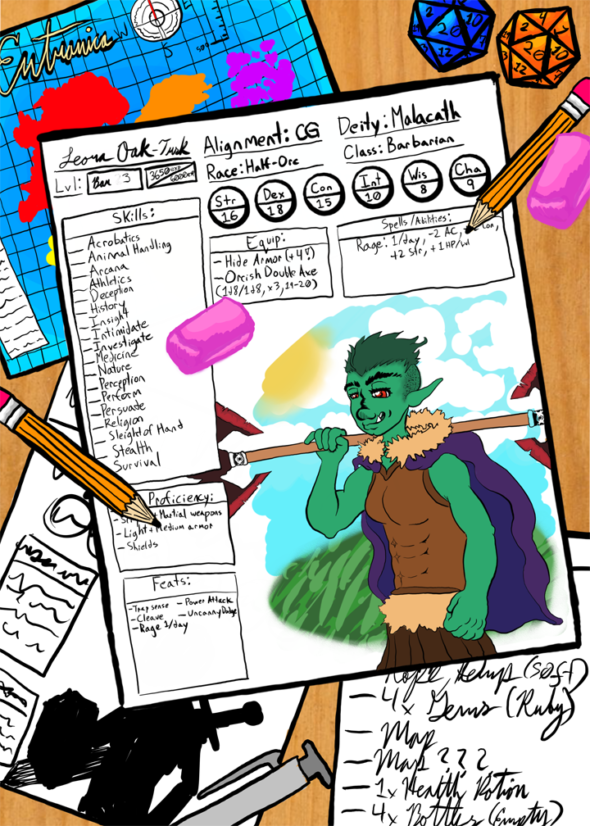 As an aspiring artist and writer, I love Dungeons & Dragons. It’s a game that many know but few truly appreciate as a creative outlet.

Gaming is a medium built on the unification of other media, combining music, writing, artwork, and more to bring beloved classics such as Pokemon or The Legend of Zelda into being. It makes sense that tabletop gaming, cut largely from the same cloth as classic RPG adventures, follows the same trend of marrying different art forms.

Unlike with video games, tabletop gamers have to build their world through written words and physical representations like figurines. One can do so much more if they wish, though, adding background music, character portraits, painted or sculpted environments, and other elements to help build the world. Any and all creative expressions are welcome within the realm of tabletop. One just has to figure out how to apply them.

This is where the Kwantlen Tabletop Club comes into play. This club not only holds regular game sessions where players of all skill levels are welcome, they also advocate for tabletop gaming as an outlet for creativity.

“We’re trying to build a network of creative people to play D&D, because it’s so much more fun that way,” says Club President and Game Master Ky Liu-Johnston.

As a sculptor, actor, writer, and overall creative person, Liu-Johnston enjoys his tabletop sessions to the fullest. Whether as a player or a dungeon master, he’s always excited to craft a world for others to experience.

“I’m a professional actor, so having people—especially people who aren’t experienced at acting—dropped into a character is very much more natural, and more interesting,” he says. “That’s half the fun.”

Liu-Johnston plans to host more events in the future for the purpose of educating people on how Dungeons & Dragons works and how to make the most of it. Players and game masters of all levels of experience are welcome, as these events set out to show not only how to build your tabletop experience, but also how the tabletop experience can improve your creative abilities.

The most recent of these events was a workshop meant to demonstrate how short stories can act as great starting points for one-shot tabletop adventures. Tabletop writing, though fun, can be a long and difficult experience when you’re searching for somewhere to start. But if you have something like a short story to base your adventure off of, you and the other players can jump into the game much faster.

“We [are] trying to muster resources for people to get involved or to continue playing with D&D, which is why we are trying to run these workshops, because it gives people the skills to start their own games,” he says.

Though the workshop was cancelled due to a lack of interest, Liu-Johnston is optimistic about future events. In the meantime, he advises writers “to look for inspiration anywhere.”

Whether you’re an artist, writer, musician, actor, or even an experienced game master, inspiration can strike at any time. Leave yourself open to it, because it just might become the foundation for a wonderful new adventure.