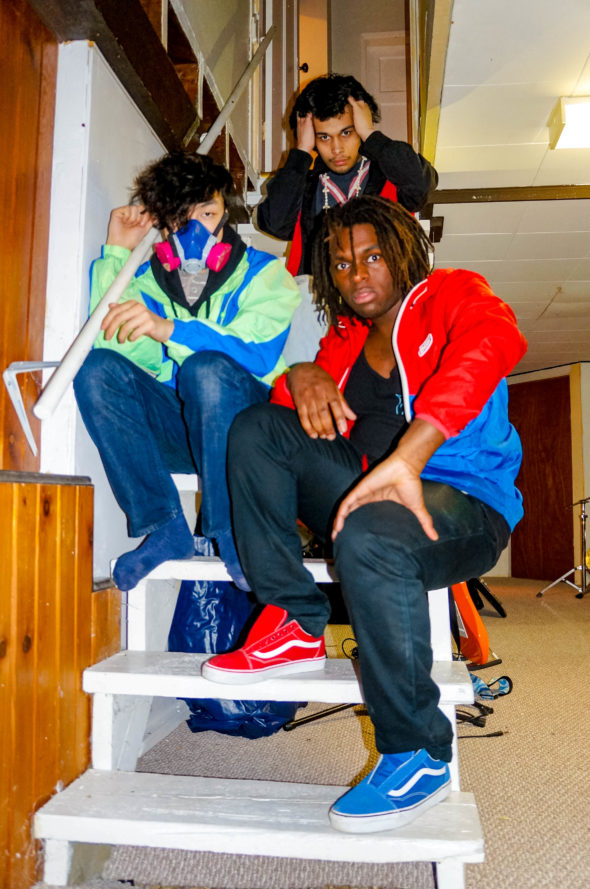 MOSAIKNIGHTS is a rap group that crashed and burned at one of the greasiest underground venues in Vancouver. They were fresh off of their first show when Exy Terry, a member of the group, decided to act as his own promoter for their next performance.

It was their second show, at the 333, when MOSAIKNIGHTS came on stage as soon as the opening act ended. Their first mistake was not giving their audience a smoke break. The next one was when member Kevin Trieu choked and lost a whole verse. When his bandmate Geronimo Clairmont tried and failed to keep the song flowing, the sweaty teenagers in the audience began to clear out.

The DJ abandoned them. Their set devolved into a practice session, and only their close friends remained. MOSAIKNIGHTS were left to perform to themselves.

Later that night the DJ said, “You know the show is bad when the DJ leaves.” Trieu admitted that it was their own flop. They didn’t practice enough. Terry insisted that they were playing to the wrong crowd.

MOSAIKNIGHTS was born near the entrance of Vancouver Technical Secondary School, where a group of high school kids played hacky sack and freestyled around a little speaker whenever they lost. Clairmont swears that Trieu’s talent for rap is so natural his mother must have held a mic to her belly while she was pregnant. The two future bandmates met there, when a young, more musically inept Clairmont would lose at hacky sack and Trieu would help him string his words together.

Terry was yet another hacky sack loser. While he says he was initially scared of being pigeon-holed as the Black guy who raps, seeing Trieu and others freestyle without a care in the world inspired him. Still, it wasn’t until he was humming “All I Want for Christmas” by Mariah Carey at a 2010 family Christmas party that he realized he wanted to have the same effect on other people with his own music.

Trieu grew up listening to Cantonese tunes that his parents played on the radio. This was mostly made up of Sam Hui and other Chinese artists whose names he refused to try to pronounce. When Hypnotize by The Notorious B.I.G. suddenly started blasting out of his parents’ radio, he was pleasantly surprised.

“I don’t even know how my parents got it. It popped out of nowhere,” he says. “I was the only one nodding to that.”

The band’s disastrous 333 show wasn’t the first time they played there. Their first show was at the same venue but was far more successful. The band was prepared. Terry stood in a corner, tequila in one hand and his cellphone in the other. He was texting his girlfriend, “I’m nervous.” It was the first time Clairmont had performed to anyone except for friends. Trieu did not know what to do. He simply screamed at the crowd as they went on stage. Instantly, the audience responded.

They had the most people watching them out of all the acts, and got an exciting amount of participation when they performed their song “Greasy”.

Took her to an East Van party

Sleemans and some East Van molly

Made out with your friend I’m sorry

The crowd joined in as they shouted. This is what the members of MOSAIKNIGHTS want. They want to make people hum. They want their music to reach people who will recognize themselves in their art. They want to say “greasy,” and make their audience say it back.