The event isn’t just a celebration of cannabis; it’s a protest against strict cannabis laws 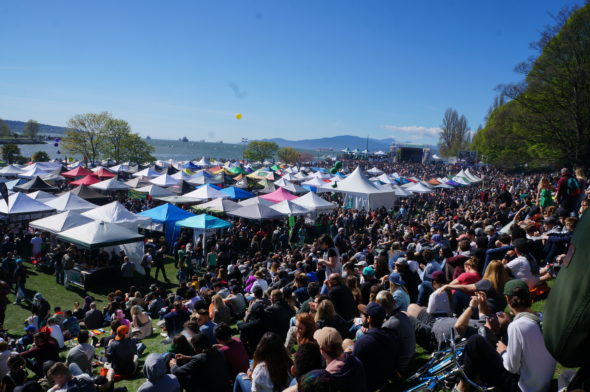 This year’s 4/20 celebration was well-attended and tidier than it has been in recent years. (Lisa Hedmark)

This year’s 4/20 event marked 25 years of protesting cannabis laws in Vancouver. According to the event’s official website, the protest was first held in 1995 at Victory Square Park, but moved to the Vancouver Art Gallery just two years later. Back then, the event attracted about 1,000 protesters, but this year nearly 100,000 people took part in the first 4/20 protest and farmer’s market following legalization.

Hundreds of vendors purchased space for their booths, and their fees were collected by 4/20 organizers and paid to the city to cover the costs of the event. Notoriously, cannabis sold at 4/20 is significantly cheaper than cannabis sold at dispensaries throughout the rest of the year.

As you might expect, not all of the vendors at 4/20 represent licensed dispensaries. Many show up with a few pounds of cannabis and sell what they’ve got from a lawn chair under a pop-up tent. Although this is not legal, most entrepreneurs get away with it year after year. This year, the police set up an intricate surveillance system to make sure vendors were not selling to minors and to document any suspicious activities.

Massive bags of joints were being passed around shortly before 4:20 pm, and attendees were instructed to throw the excess doobies backwards to spread them thoroughly throughout the crowd. A cannabis-themed version of “Oh, Canada” was sung, and the crowd and vendors simultaneously lit up their 4/20 protest joints.

While cannabis is currently legal in Canada, what many attendees are protesting is the strict laws that still impact the drug post-legalization. Some of these laws include restrictions on the number of plants allowed per household, the sale of edibles, and criminal charges surrounding cannabis use and production.

#FakeLegalization, a popular hashtag used during the protest, refers to the fact that some cannabis users and manufacturers saw the pre-legalization restrictions as more fair than the laws that are in place now. As a result, the 4/20 protests continue to be held in order to show the government just how many people use cannabis and are still unhappy with the legal frameworks that restrict the use and distribution of the plant.

This year’s protest was headlined by ‘90s California hip-hop group Cypress Hill. The group is notorious in the cannabis world due to the many references to cannabis in their songs.

According to Leafly, the city’s park board commissioner introduced an “urgent motion” to cancel the Cypress Hill performance due to the large number of people the group would draw to the event and the subsequent policing costs that the city would face. This didn’t stop the group from going ahead and performing for thousands of Vancouverites with a comically large joint lit upon entering the stage, however.

The event was very well organized this year and photos of the impressive clean up were posted by The Georgia Straight. Minimal damage and garbage were seen in the grassy area where the event took place at Sunset Beach. This is a refreshing change, considering previous 4/20 protests which were criticized due to the mess left behind by vendors and attendees.