On March 24, Langley’s Spirit Square was filled with just that: spirit 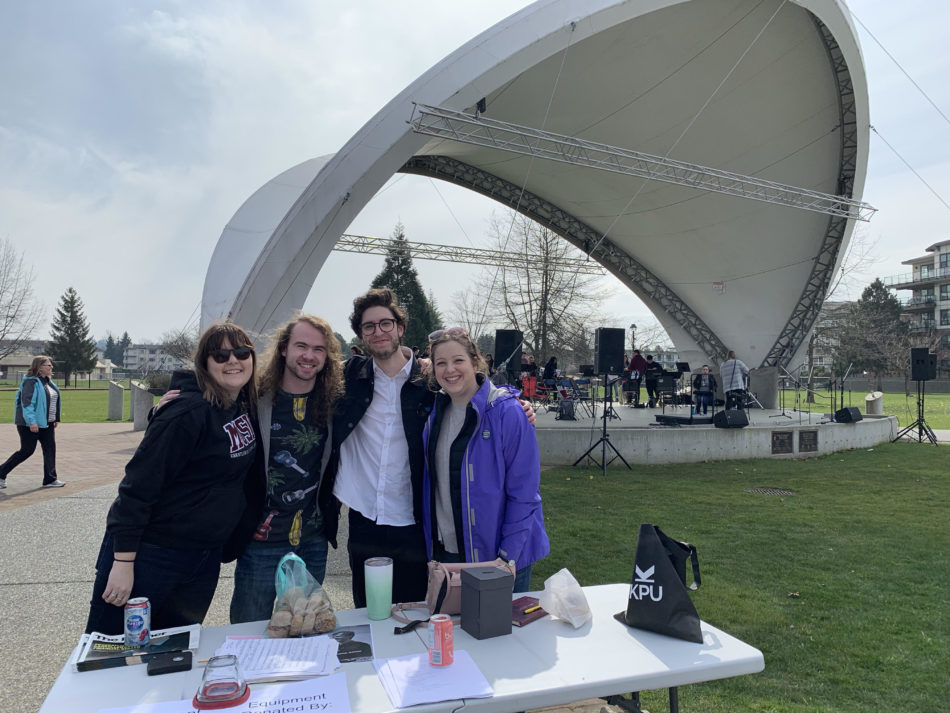 Victoria Parker-Poitras, Lucas Mckinnon, Nathan Brocus and Emma Dotto at the rally to save the music program. (Jayne Wright)

In protest of the suspension of intake into Kwantlen Polytechnic University’s music program, students took to Spirit Square to express their outrage and fight for a reversal of the administration’s decision. They were joined by friends, parents, alumni, community members, and applicants who had been hoping to enroll in the program before the suspension was announced.

As might be expected from a rally organized by music students, there was a cacophony of sounds filling the air throughout the day. With trumpets sounding and cymbals being setting up in a boisterous commotion behind her, Emma Dotto, President of the Music Students Association, stood amongst her peers.

“I hope that this rally is going to showcase the talent and the skill that musicians from Kwantlen have and that we are developing through the program. We have a community behind us,” she says.

She hopes that “by having such a physical show of support, it’ll send a message to the administration … that KPU music is here and we’re ready to make noise.”

Dotto, who is in her third year of studying voice, explains that instructors as well as students are all feeling the impacts of the recent news.

“There’s raw emotion in the department,” she says. “This is the arts we’re talking about, and you see arts get cut all the time, but you never think it’s going to happen to your program.”

In an email statement to The Runner, KPU Dean of Arts Diane Purvey wrote that the music program is “unsustainable” in its current format, with costs exceeding revenues “at a ratio greater than 2:1.”

“The university runs [the program] at a loss and any growth in the program only adds to that loss,” she wrote. “We understand and support the passion for a music program, but that passion cannot override our need to run the program within a fiscally sustainable model.”

According to Nicole Murker, one of the applicants to the music program who is now unable to enroll in the first year, the decision to suspend the program’s intake shows “a lack of understanding from administration of what music means to our community.”

In the middle of the rally, Emma Messner explains how upsetting the news has been to her as a foundations student. The foundations program is designed to assist students who got involved in music later in life to learn the basics before officially entering the program with a full course load.

With KPU not intending to run first year courses in the coming semester, Messner is uncertain if her hard work on catching up will be for nothing.

“We haven’t gotten any of our questions answered. They told us right when most universities cut off their application,” she says.

As music rang through the park and onto Langley streets, a sense of united optimism was in the air. Supporters sat on lawn chairs tapping their feet as the musicians played into the afternoon.