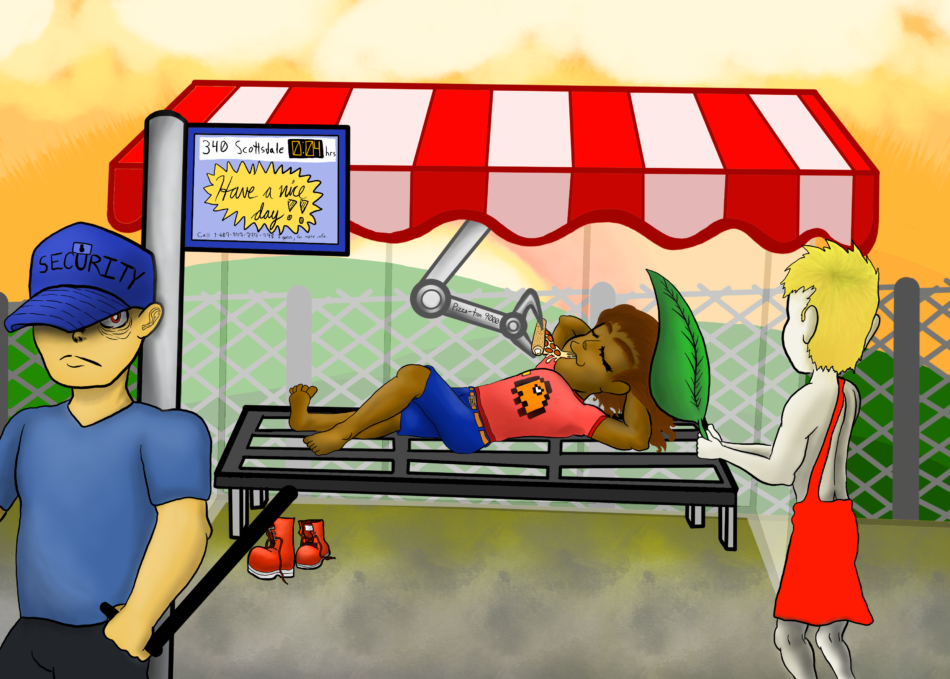 I think it’s fair to say that everyone has had a bad experience with a bus station at some point. No matter where you live, somewhere, somehow, you’ll always be able to find a dingy, rundown bus stop nearby. It’s just one of life’s constants, like death and taxes.

To their credit, TransLink is looking to improve its stops by calling on the public for help. The “Open Call for Innovation” asks people to submit “new ideas for customer amenities at SkyTrain stations and bus exchanges” by April 30.

The first and most important part of any travel plan is staying safe, and unfortunately, bus stops are a very common setting for crime and accidents due to their lack of proper light and shelter. It’s altogether too common for people to feel completely unsafe and on edge as they wait for their busses, particularly as the day gets dark.

Even in neighborhoods that would be considered safe by day, it’s not uncommon to have burnt out street lamps near the stop, rendering the area around it pitch black. Dim light is almost worse than no light at all, because then you’re essentially just a sitting duck in a spotlight. Instead, I propose that every bus stop should have a well-lit diameter of at least 5 meters, so that we can keep a better, wider guard up while we wait for a ride home.

Dealing with the rain is a different issue altogether, though. Have you ever noticed that when it rains, 90 per cent of the bench at any given bus stop is totally soaked? That’s because the awnings they place over the top of the stop fail to protect people unless they’re backed right up against the wall. In Japan, people waiting for the train get entire air-conditioned rooms to wait in. I think that TransLink can probably afford to place slightly bigger roofs over the heads of their passengers.

Safety aside, the stops would benefit by having their own route maps installed. This may finally get people off their navigational apps and incentivize them to learn more about navigating their neighborhoods. At least it seems like a great place to start.

One of my personal pet peeves when it comes to transit is waiting for a bus that never shows up, or looking away for a moment only to have your bus drive by. To actually have an LED display telling me when to expect the cheeky little buggers, in conjunction with our earlier idea of implementing maps, would mean that we would never have to obsessively  check our navigation apps again. Instead, we would actually have the time and energy to enjoy our wait, and the scenery of our beautiful country.

Now, this is just the tip of the iceberg. There are countless other ways to improve our bus stops. Whether it’s the important task of making them safer, or something as frivolous as making them a bit more scenic, the most important thing is that we take the time to think of these improvements instead of accepting a flawed transit system.